For the first time since last spring, Barack Obama’s steadily declining job rating has shown a modest improvement. And while his signature legislative accomplishment – the 2010 health care law – remains unpopular, Obama engenders much more public confidence on health care policy than do Republican leaders in Congress. 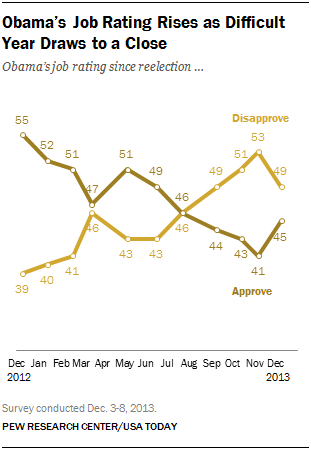 The flawed rollout of the health care law has registered with the public, with an increasing number of Americans saying its effect on the country so far has been negative. However, assessments of the law’s future impact are little changed and, if anything, have become slightly more positive.

The national survey by the Pew Research Center and USA TODAY, conducted Dec. 3-8 among 2,001 adults, finds that despite the recent uptick in Obama’s job rating, his standing with the public is much worse today than it was at the start of the year. The percentage viewing Obama as “not trustworthy” has risen 15 points since January – from 30% to 45%. There has been a comparable increase in the share saying he is “not able to get things done” (from 37% to 51%).

Yet, Obama’s job rating has reversed a six-month slide. Currently, 45% approve of the way he is handling his job as president while 49% disapprove. In early November, amid the widely criticized rollout of health care exchanges and the Healthcare.gov website, 41% approved of his job performance and 53% disapproved. His job rating had been as high as 51% in May and 55% in December 2012, shortly after he won reelection.

Currently, 41% approve of the 2010 health care law while 54% disapprove. That is little changed from surveys conducted in October and September, before controversies erupted over the health care website glitches and cancellation of some individual health care plans. 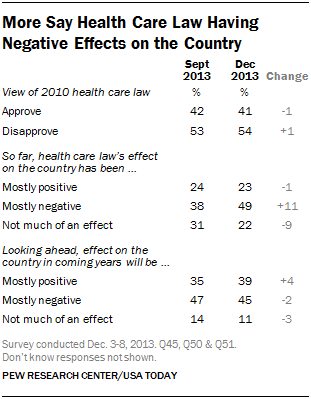 The public is divided over whether the law’s problems can be fixed: 44% say the health care law has faced short-term problems that can be resolved, while 50% say the problems show “fundamental flaws in the law.”

There has been a rise in the percentage of Americans who say that the health care law has had a negative effect on the country – from 38% in September to 49% in the current survey. Just 23% say the law’s impact has been mostly positive, little changed from September, while 22% say it has not had much of an effect, down from 31% three months ago.

The September survey, also conducted with USA TODAY, found that opponents of the health care law were divided over next steps. Overall, 27% of the public said that elected officials who oppose the law should make it work as well as possible, while about as many (23%) said they should do what they can to make it fail. In the current survey, however, significantly more want elected officials to make the law work (29%) than to make it fail (19%).

Despite the widespread public criticism about many aspects of the rollout of the health care law – for example, just 30% say the health care exchanges are working well – far more Americans express confidence in Obama than Republican congressional leaders to do the right thing when it comes to health care policy.

The survey finds that Obama’s job ratings on major issues such as health care policy and the economy remain in negative territory. 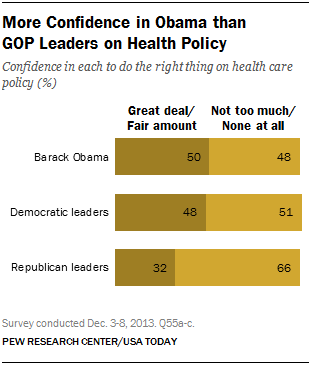 Opinions about several of Obama’s personal traits and characteristics have become more negative since earlier in the year. Obama continues to get strong ratings for being seen as standing up for what he believes in – fully 76% describe Obama this way. Majorities also view Obama as a “good communicator” (68%) and as “someone who cares about people like me” (58%). The percentage saying Obama stands up for his beliefs has fallen six points since January, while there have been eight-point declines in positive views of Obama for his communication abilities and empathy. 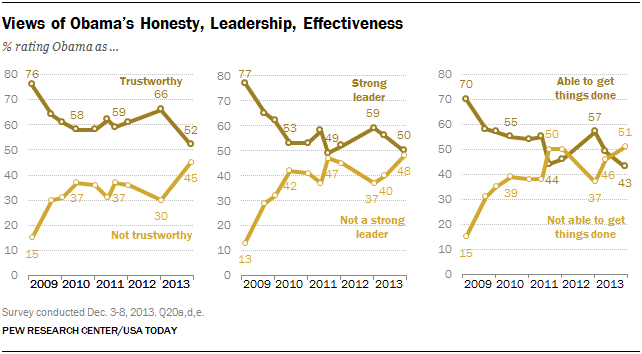 But Obama’s weakest ratings come on perceptions of his effectiveness, leadership and honesty – and negative views on all three traits have increased by double digits since the start of 2013. Currently, 43% say Obama is able to get things done, while more (51%) say he is not able to accomplish things. In January, more viewed Obama as able to get things done, by 57% to 37%.

And the percentage viewing Obama as trustworthy has fallen 14 points since the start of the year, from 66% to 52%. This is Obama’s lowest rating for trustworthiness since he took office. This decline in Obama’s credibility may well reflect public reactions to his promise that if people like their current health care plans they would be able to keep them under the Affordable Care Act. The public is evenly divided over whether Obama deliberately misled the public with this pledge: 47% say he was deliberately misleading about whether people would be able to keep their existing health plans while 47% say he did not mislead the public. 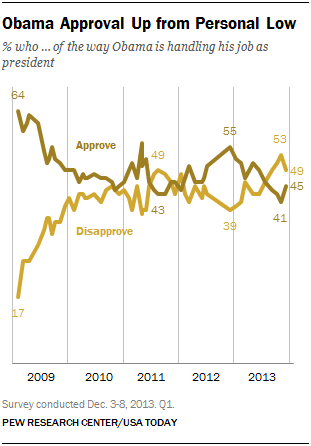 After a period of steady decline, Barack Obama’s overall job approval has edged up to 45% from a low of 41% in early November. Yet even with this uptick, Obama’s job approval is 10-points down from a year ago, following his re-election.

Overall, the president’s performance rating is comparable to where it stood in September of this year – before the government shutdown and launch of the health care exchanges. It is also similar to the ratings he received in late 2011 following that year’s debt ceiling debate, and in late 2010 around that year’s midterm election in which Republicans regained a majority in the House of Representatives.

Obama continues to receive negative ratings from a majority of Republicans (83% disapprove, 13% approve) and independents (57% disapprove, 36% approve), while most Democrats (81% approve, 15% disapprove) continue to support the president.

For more details on Obama’s job approval ratings, see the detailed tables at the back of this report.

Economic Ratings Up From Record Low 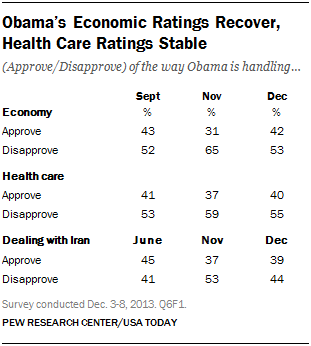 Obama’s ratings on health care have been far more stable in recent months, with more continuing to disapprove (55%) than approve (40%) of his performance in this area.

The public is nearly evenly divided on Obama’s handling of Iran; 39% approve and 44% disapprove. In November, before the multilateral agreement aimed at freezing Iran’s nuclear development program, 37% approved and more than half (53%) disapproved of the president’s handling of Iran. The difference is that more offer no opinion on this issue today (17%) than last month (10%).

On the federal budget deficit, 34% approve of how Obama is handling the deficit, compared with 58% who disapprove. Obama’s ratings on the deficit have been consistently negative since shortly after he took office in 2009. 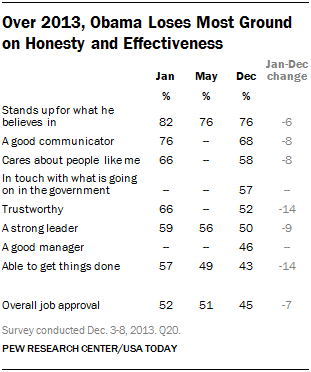 The drop in the share who see Obama as “trustworthy” is comparable: from 66% in January to 52% today. Meanwhile, the share saying he is not trustworthy is up from 30% to 45%.

This is the first time in Obama’s presidency that public confidence has fallen to this level. At 52%, the share describing the president as trustworthy is below the previous low of 58% in 2010 and 2011. In a February 2009 survey, just after he took office, 76% described Obama as trustworthy.

Similarly, fewer now say the president is a “good communicator,” down to 68% from 76% at the start of the year, and a previous low of 75% in 2011. When he first took office, fully 92% described Obama as a good communicator.

When it comes to several other traits, current views of the president match previous lows reached in August of 2011 following that summer’s debate over raising the nation’s debt ceiling. For example, 50% now describe Obama as a “strong leader,” down from 59% at the start of the year and about equal to the 49% who called Obama a strong leader in August of 2011.

The 2010 health care law remains unpopular with the public: 54% say they disapprove of the law while 41% approve. Opinion has changed little over the past three months, and the law remains divisive across a range of demographic and partisan groups.

As was the case in September, before the launch of the online health care exchanges, whites overwhelmingly disapprove of the law (64%-30%). Support is higher among Hispanics (52%) and blacks (81%). Three months ago, Hispanics approved of the law by a 61%-33% margin, and blacks supported it 91%-8%.

Across all age groups, more disapprove than approve of the 2010 health care law. Young people (ages 18-29) were divided over the law earlier this fall and were one of the groups most supportive of the law, dating back to its passage in 2010. In the current survey, 54% of those under 30 disapprove of the law, while 41% approve.

Impact of the Law: Current and Future

A majority of Americans (60%) continue to say that the health care law hasn’t had much of an effect on them or their family, little changed from 63% who said this in September. 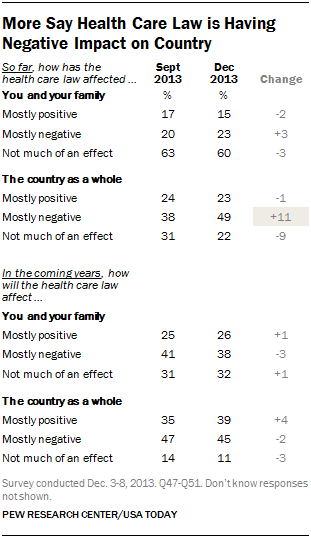 Republicans (+15 points) and independents (+14 points) have both become much more likely to see the law’s impact so far as mostly negative. There has been little change among Democrats.

Looking forward, views of the overall impact of the law in the coming years are more divided: 45% think the law will have a mostly negative effect, 39% think it will be mostly positive, and 11% don’t think it will have much of an effect. In September, somewhat fewer (35%) said the law would have a positive impact on the country in coming years.

What Should Officials Opposed to the Law Do Now? 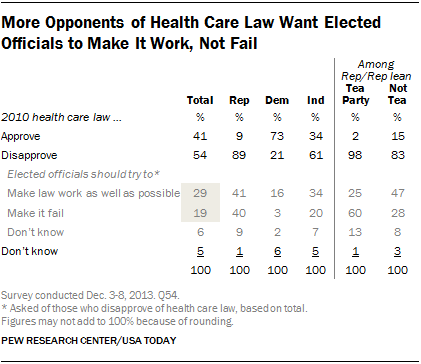 More Have Confidence in Obama than GOP Leaders on Health Care 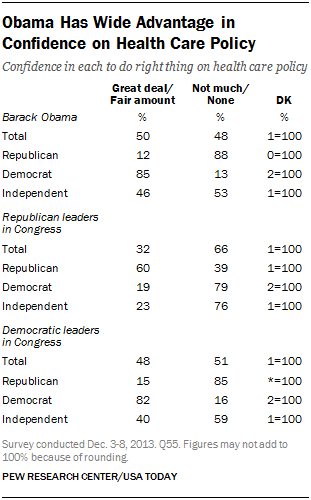 In spite of the unpopularity of the health care law, the public expresses more confidence in Barack Obama and Democratic congressional leaders than in Republican leaders when it comes to health care policy.

Half (50%) have a great deal or fair amount of confidence in Obama to do the right thing on health care policy; about as many (48%) say they have confidence in Democratic leaders in Congress. By contrast, just 32% say they are confident that Republican leaders in Congress will do the right thing when it comes to health care policy. 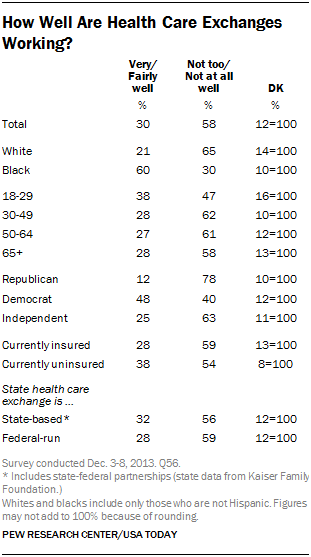 These ratings are slightly worse than just after the Healthcare.gov website went live online. When asked a similar question in the second week of October, 46% said the online exchanges were not working well, while 29% gave the exchanges a positive review (25% didn’t offer an opinion).

Those without health insurance offer more positive views of the exchanges than do those who have health insurance. Still, majorities in both groups (54% of the uninsured, 59% of the insured) say they are not working well.

Impressions of the online exchanges among young people (38% going very/fairly well, 47% not too/at all well) are somewhat less negative than the impressions of older Americans. 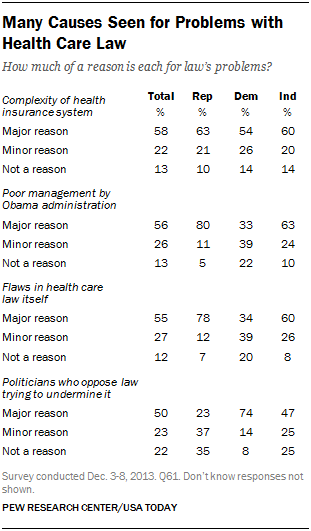 When asked about reasons why the health care law has encountered problems, the public cites managerial shortcomings by the Obama administration and flaws in the law itself as major reasons, but also points to the complexity of the health insurance system and opposition from politicians trying to undermine the law.

About as many Democrats (54%) as Republicans (63%) hold the view that the insurance system’s complexity is a major reason for the law’s problems. But partisans are sharply divided on the other three measures.

Among Democrats, the most persuasive reason why the law has faced problems is that politicians who oppose the law are trying to undermine it; for Republicans and independents, this gets the least support of the four reasons given. Nearly three-quarters of Democrats (74%) name politicians’ attempts to undermine the law as a major reason, compared with 23% of Republicans and 47% of independents. 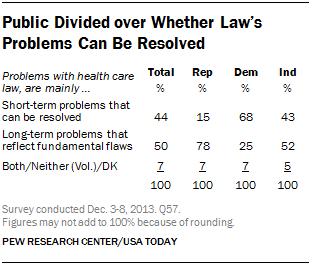 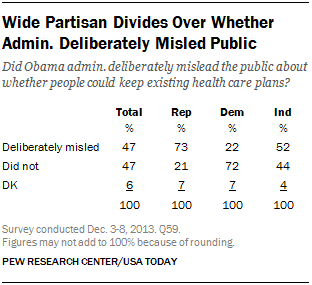 In the wake of concerns about Americans who received cancellation notices from their health insurers, the public is divided over whether the Obama administration deliberately misled Americans about whether they would be able to keep their existing health care plan. Nearly half (47%) says the administration did deliberately mislead the public on this issue, while the same percentage (47%) says it did not.