The public closely tracked the resolution to the government shutdown and increase in the debt limit, with nearly half 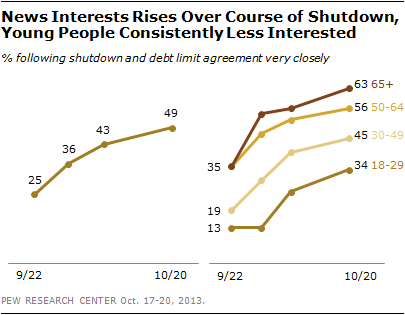 The latest national survey by the Pew Research Center, conducted Oct. 17-20 among 1,001 adults, finds that interest in the government shutdown rose steadily over the past month. In mid-September, 25% were paying very close attention to Congress working on an agreement to avoid a shutdown; interest reached 43% in early October, when the government closed its doors, and nearly half closely followed news about the end of the 16-day government shutdown.

News interest rose across all age groups over the course of the shutdown, however, young people (under age 30) lagged well behind other age groups in following shutdown news. About a third (34%) of those ages 18-29 say they followed news about the resolution of the shutdown and debt limit increase very closely, interest was far higher among older Americans. For example, 63% of those ages 65 and older paid very close attention to the shutdown news. Over the past month, news interest has increased at least 20 points across all age groups, with gaps in interest between older and younger Americans staying relatively stable. While younger Americans typically pay less attention to news events than older Americans, the gap on the government shutdown is particularly wide. 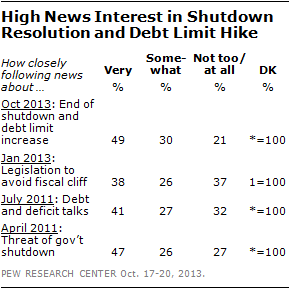 Interest in the shutdown is higher than in the legislation that avoided the so-called “fiscal cliff” in January 2013; at that time, 38% said they followed news about the fiscal cliff deal very closely. Interest is also higher than in July 2011, when 38% paid very close attention to the talks over the national debt and budget deficit that ultimately resulted in a last-minute increase of the debt limit.

In April 2011, about as many paid very close attention to the threat of a government shutdown over budget disagreements (47%) as followed the

resolution of the current shutdown.

Partisans paid about equal levels of attention to the news about the shutdown’s end: 55% of Republicans and 49% of Democrats and independents followed news very closely.

Overall, 56% of college graduates say they paid very close attention to news about the agreement that ended the government shutdown and raised the debt limit; interest was somewhat lower among those without a college degree.