The analysis in this report is based on telephone interviews conducted October 31-November 3, 2012, among a national sample of 3,815 adults, 18 years of age or older, living in all 50 U.S. states and the District of Columbia (2,262 respondents were interviewed on a landline telephone, and 1,553 were interviewed on a cell phone, including 784 who had no landline telephone). Data collection was managed by Princeton Survey Research Associates International and conducted by interviewers at Princeton Data Source and Abt SRBI. A combination of landline and cell phone random digit dial samples were used; both samples were provided by Survey Sampling International. Interviews were conducted in English and Spanish. Respondents in the landline sample were selected by randomly asking for the youngest adult male or female who is now at home. Interviews in the cell sample were conducted with the person who answered the phone, if that person was an adult 18 years of age or older. For detailed information about our survey methodology, see https://www.pewresearch.org/politics/methodology/

The combined landline and cell phone sample are weighted using an iterative technique that matches gender, age, education, race, Hispanic origin and nativity and region to parameters from the March 2011 Census Bureau’s Current Population Survey and population density to parameters from the 2010 Census. The sample also is weighted to match respondents’ reported 2008 presidential vote to the average of previous Pew Research Center surveys conducted between March 2011 and October 2012.1 The sample also is weighted to match current patterns of telephone status and relative usage of landline and cell phones (for those with both), based on extrapolations from the 2011 National Health Interview Survey. The weighting procedure also accounts for the fact that respondents with both landline and cell phones have a greater probability of being included in the combined sample and adjusts for household size among respondents with a landline phone. Sampling errors and statistical tests of significance take into account the effect of weighting. The following table shows the unweighted sample sizes and the error attributable to sampling that would be expected at the 95% level of confidence for different groups in the survey:

Likely voter estimates are based on a 9-item turnout scale that includes the following questions: thought, campnii, precinct, oftvote, where, plan1/plan3, folgov, pvote08a and scale10. The turnout estimate used in identifying likely voters is 58%. More details about the Pew Research Center’s methodology for estimating likelihood to vote are available at https://assets.pewresearch.org/wp-content/uploads/sites/5/2011/01/UnderstandingLikelyVoters.pdf.

The poll was conducted in the aftermath of Hurricane Sandy, which affected a large area of the Northeastern coastal region of the United States. To assess the potential impact of the storm damage on the representativeness of the poll’s results, respondents living in counties judged to be highly affected were grouped into one stratum. The assignment of counties was based on a combination of ratings of storm impact from Federal Emergency Management Agency (FEMA) and reports of the percentage of households without power in each county. Pew Research polling over the course of 2012 prior to the storm found that an average of 5.7% of interviews (on an unweighted basis) were obtained from counties affected by the storm. In the current poll, 5.8% of respondents interviewed live in the affected counties. 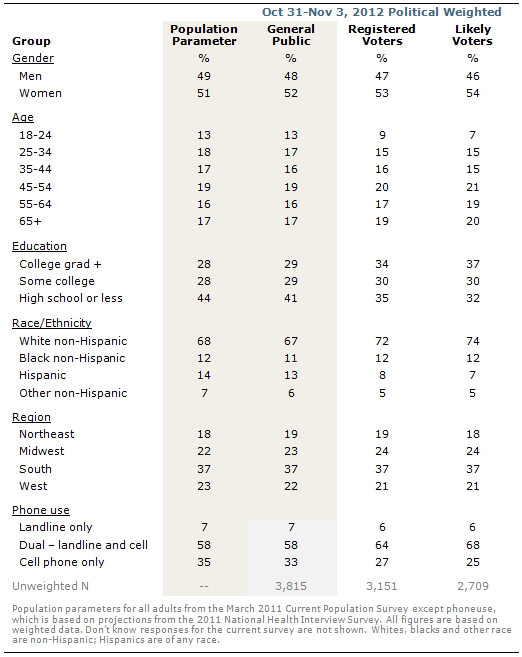