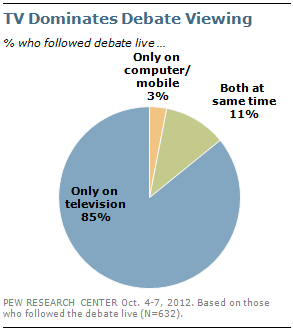 The vast majority of Americans say they followed coverage of the first presidential debate between Mitt Romney and Barack Obama, including 56% who followed the debate live. Most of these real-time viewers watched on television, but 11% of live debate watchers were “dual screeners,” following coverage on a computer or mobile device at the same time as following television coverage. Another 3% say they followed the debate live exclusively online.

The post-debate survey by the Pew Research Center for the People & the Press, conducted Oct. 4-7 among 1,006 adults, finds younger Americans are especially likely to be “dual-screeners,” following the debate live on both television and a computer or mobile device. 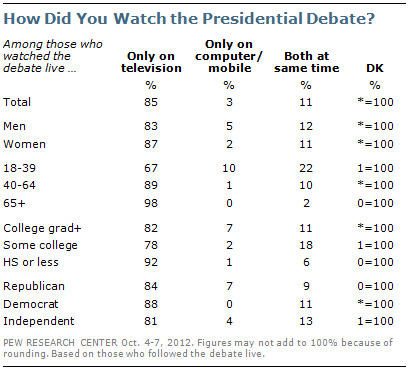 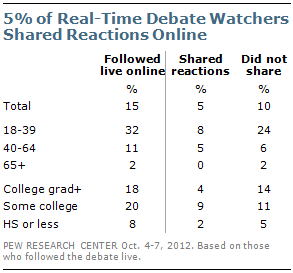 While Twitter and Facebook provide an outlet for a range of debate reactions, only a small share of Americans are actively participating in these conversations. Only about a third of those who followed the debate in real time online – representing 5% of the overall debate audience– say they shared their own reactions to the debate online. This includes 8% of live debate watchers younger than 40 and 5% of those 40-to-65. No real-time debate watchers 65 and older reported sharing their reactions online while the debate was going. 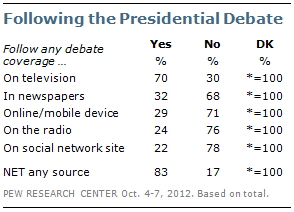 Overall, 83% of Americans followed any coverage of the first presidential debate either live or after the debate had already occurred. As with live coverage, television is the dominant source, outpacing other traditional sources, such as newspapers and radio, as well as online sources and social networking sites.

About a third (36%) of Americans got any debate coverage online or from social networking sites; far more (78%) say they got coverage 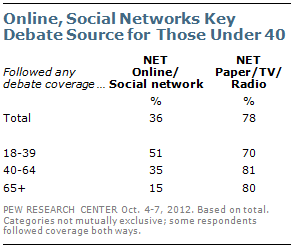 from traditional sources, including television, newspapers, or radio. Among those younger than 40, however, the gap is narrower: about half (51%) followed coverage online or on social networking sites, compared with 70% who followed coverage either on television, the radio, or in newspapers. About a third (35%) of those 40-to-64 say they followed debate coverage online or on social networks, compared with 81% who got any coverage through television, newspapers, or the radio. Just 15% of those 65 and older followed the debate digitally; 80% say they turned to traditional sources for debate coverage.