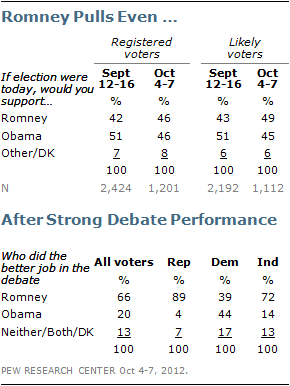 Mitt Romney no longer trails Barack Obama in the Pew Research Center’s presidential election polling. By about three-to-one, voters say Romney did a better job than Obama in the Oct. 3 debate, and the Republican is now better regarded on most personal dimensions and on most issues than he was in September. Romney is seen as the candidate who has new ideas and is viewed as better able than Obama to improve the jobs situation and reduce the budget deficit.

Fully 66% of registered voters say Romney did the better job in last Wednesday’s debate, compared with just 20% who say Obama did better. A majority (64%) of voters who watched the debate describe it as mostly informative; just 26% say it was mostly confusing.

In turn, Romney has drawn even with Obama in the presidential race among registered voters (46% to 46%) after trailing by nine points (42% to 51%) in September. Among likely voters, Romney holds a slight 49% to 45% edge over Obama. He trailed by eight points among likely voters last month.

The latest national survey by the Pew Research Center for the People & the Press, conducted Oct. 4-7 among 1,511 adults, including 1,201 registered voters (1,112 likely voters), finds that 67% of Romney’s backers support him strongly, up from 56% last month. For the first time in the campaign, Romney draws as much strong support as does Obama. 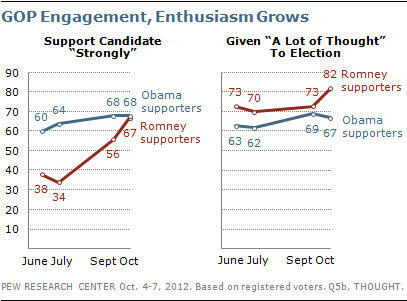 More generally, the poll finds Romney’s supporters far more engaged in the campaign than they were in September. Fully 82% say they have given a lot of thought to the election, up from 73% in September. The new survey finds that Romney supporters hold a 15-point advantage over Obama backers on this key engagement measure. Supporters on both sides were about even in September.

Coming out of the debate, Mitt Romney’s personal image has improved. His favorable rating has hit 50% among registered voters for the first time in Pew Research Center surveys and has risen five points since September. At the same time, Obama’s personal favorability rating has fallen from 55% to 49%.

In the presidential horserace, Romney has made sizable gains over the past month among women voters, white non-Hispanics and those younger than 50. Currently, women are evenly divided (47% Obama, 47% Romney). Last month, Obama led Romney by 18 points (56% to 38%) among women likely voters. 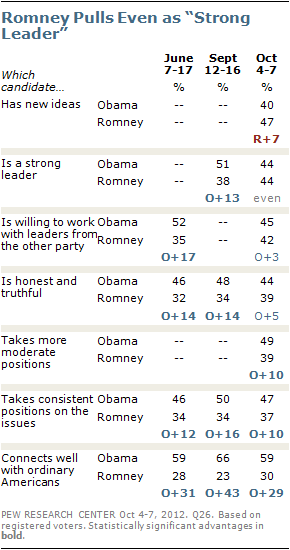 Romney now ties Obama in being regarded as a strong leader and runs virtually even with the president in willingness to work with leaders of the other party. And by a 47% to 40% margin, voters pick Romney as the candidate who has new ideas.

Romney has gained ground on several of these measures since earlier in the campaign. Most notably, Obama and Romney now run even (44% each) in terms of which candidate is the stronger leader. Obama held a 13-point advantage on this a month ago. And Obama’s 14-point edge as the more honest and truthful candidate has narrowed to just five points.

In June, Obama held a 17-point lead as the candidate voters thought was more willing to work with leaders from the other party. Today, the candidates run about even on this (45% say Obama, 42% Romney). 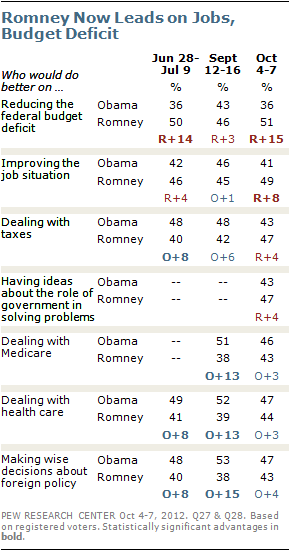 Similarly, Romney has made progress on the issues. He and Obama now run about even on dealing with health care, Medicare, foreign policy and taxes. Obama led on most of these issues by significant margins in September. Romney also holds a significant 49% to 41% advantage on improving the job situation, despite the fact that most of the interviewing was conducted after the October jobs report, which showed the unemployment rate falling below 8%. 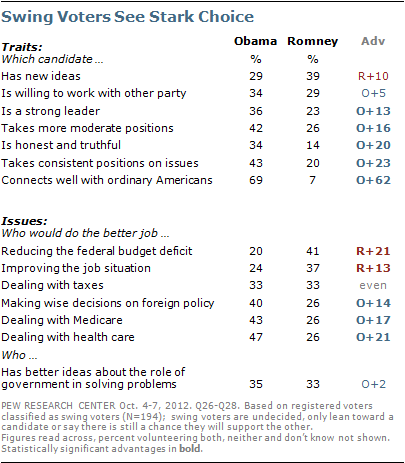 By a 69% to 7% margin, swing voters say Obama is the candidate who connects will with ordinary Americans. Swing voters also tend to rate Obama as the more consistent, honest and moderate candidate, and as a strong leader. Swing voters also favor Obama on the issues of health care, Medicare and foreign policy.

But Romney continues to hold a decided edge over Obama on jobs and the budget deficit. By a 37% to 24% margin, more swing voters say Romney would improve the job situation. Swing voters favor Romney on the deficit by a two-to-one (41% vs. 20%) margin.

A substantial majority of voters continue to say that Mitt Romney’s policies would help the wealthy, but he has made gains since the summer in the perception that his policies as 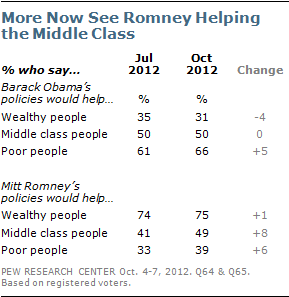 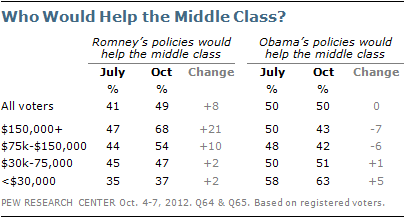 68% now. Among voters in households with incomes between $75,000 and $150,000, the increase was 10 points (from 44% to 54%). Voters in lower-income households have not changed their view of whether Romney would help the middle class, and those with household incomes under $30,000 continue to see Obama as doing more for the middle class. 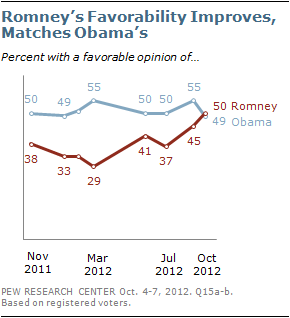 The edge in favorability ratings that Barack Obama had enjoyed throughout the campaign has now been erased, as voters’ impressions of Romney have continued to improve while Obama’s ratings have returned to levels seen earlier in the summer. Currently, voters are about evenly divided in their overall opinions of both Obama (49% favorable, 48% unfavorable) and Romney (50% favorable, 46% unfavorable). 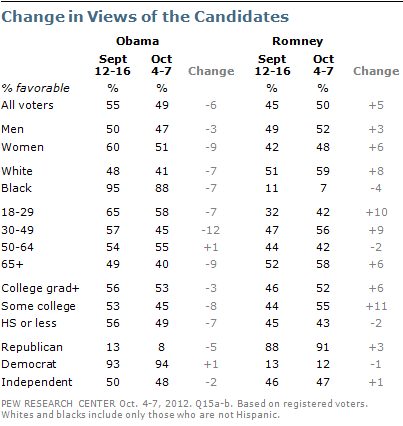 While shifts are evident across many demographic groups, there has been a notable change among women voters: In September, just 42% viewed Romney favorably, while 60% had positive impressions of Obama. Today, about half view each of the candidates favorably (51% Obama, 48% Romney).

Romney also has gained ground with younger voters. Today, 51% of those under 50 have positive impressions of the GOP candidate, up from 43% in September. Mirroring Romney’s improvement among these younger voters is an erosion in Obama’s ratings among this group: 49% of 18-49-year-old voters now view him favorably, down 10 points from September. 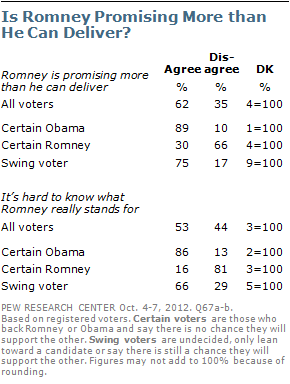 While Romney’s personal image and standing in the horserace have improved markedly, two criticisms of the candidate register widely with voters – especially swing voters.

About six-in-ten voters (62%) agree with the statement that “Romney is promising more than he can deliver,” while 35% disagree. Among swing voters, fully 75% agree, which is closer to the views of certain Obama voters (89% agree) than certain Romney voters (30% agree).

Just more than half of voters (53%) also agree that “It’s hard to know what Romney really stands for.” This includes two thirds (66%) of swing voters, 86% of certain Obama voters and just 16% of certain Romney voters. 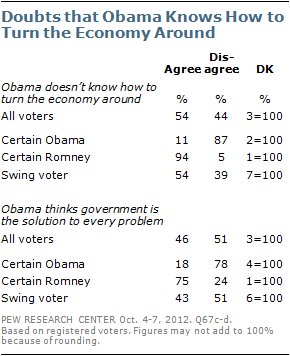 Voters are divided in their reactions to the statement: “Obama thinks government is the solution to every problem” – 46% agree with it, while 51% disagree. The balance of opinion among swing voters mirrors that of voters overall (46% agree, 51% disagree), while Obama voters (78% disagree) and Romney voters (75% agree) hold opposing views. 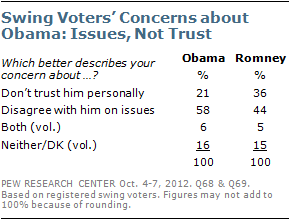 Since September, Mitt Romney has made gains among women and younger voters, and has expanded his advantage among whites without a college degree. In the current poll, women likely voters are evenly divided between the candidates (47% each), while men support Romney by a 51%-43% margin. Last month, Obama led Romney by 18 points among women, and trailed among men by only two points.

Similarly, Obama held a solid 56%-39% lead among likely voters under 50 last month. In the current poll, Obama runs even with Romney among voters in this age group (46% Obama, 49% Romney).

Romney picked up seven points among white voters over the past month (from 51% in September to 58% now), while the horse race is unchanged among black voters. Obama’s earlier edge among college graduates (53%-42% in September) is now gone (48% Obama, 47% Romney). And Romney picked up nine points among voters with family incomes of $75,000 or more.

Obama trailed Romney last month among whites who don’t have a college degree, but he has fallen further behind in the current poll. Romney led Obama 53%-40% among this group in September but now holds a much larger 28-point lead (61%-33%). 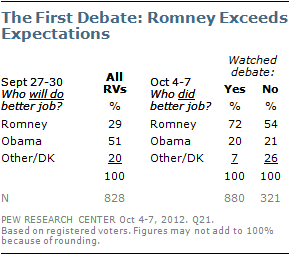 A substantial majority of voters (69%) say they watched at least some part of last week’s presidential debate and by a more than three-to-one margin (72%-20%), voters who watched say that Romney did a better job than Obama. Romney’s performance exceeded voters’ expectations. Heading into the debate, about half said that Obama (51%) would do a better job, while only 29% said Romney would win. Republican and Democratic voters were about equally likely to have watched the debate. 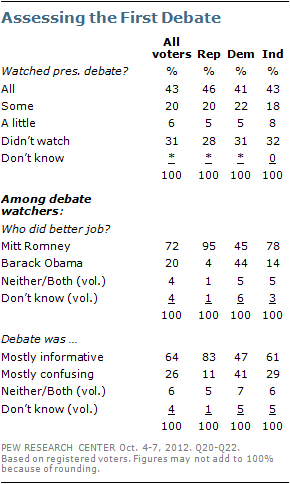 The vast majority of Republican voters who watched the debate (95%) say that Romney did the better job, and many Democratic voters agree. Democrats are split in their assessment of who did better: 45% say Romney, 44% Obama.

Among independent voters, Romney was the clear winner (78% vs. 14%). And views of swing voters mirror those of independents: 70% say Romney won, 14% Obama.