The public’s perceptions of economic news have taken a turn for the worse. And that could be bad news for Barack Obama, who held a lead over Mitt Romney in polling conducted mostly 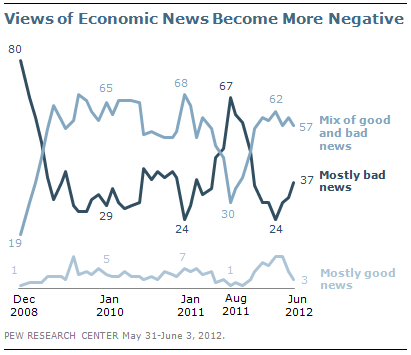 Currently 37% say they are hearing mostly bad news about the economy, up from 32% last month and the highest percentage expressing that view this year, according to a new survey conducted May 31-June 3 among 1,012 adults by the Pew Research Center for the People & the Press.

Perhaps even more politically charged, the new poll finds the number of Americans saying they have been hearing mostly bad news about jobs has spiked, from 38% in March to 55% currently. The lone positive finding for the Obama campaign in the current survey is that markedly fewer report hearing mostly bad news about gasoline prices – 48% today, compared with 85% in March.

On balance, the public’s views of economic news remain far more positive than they were last fall. But this marks the second year in a row when perceptions of economic news have grown more negative in the late spring.

ver Mitt Romney in the presidential horserace. That survey, among 3,003 adults, including 2,338 registered voters, was conducted over the past several weeks (May 9-June 3).

It was largely completed before the release of a weaker-than-expected federal jobs report on June 1 and recent declines in financial markets.

Past surveys have found that Obama’s job approval, and his standing in the presidential race, has been somewhat better when perceptions of economic news are less negative. In March, Obama’s job rating reached 50% (for the first time since Osama bin Laden’s killing) and he held his widest lead to date over Romney (54% to 42%). That month, just 24% said they were hearing mostly bad news about the economy, the lowest percentage in more than a year. 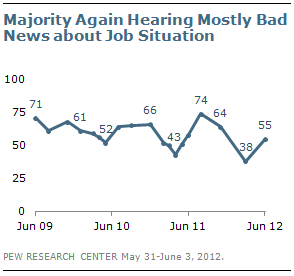 Though the employment situation showed signs of improvement earlier in the year, recent reports indicate that job growth has slowed. Last week, the Labor Department reported that the unemployment rate had ticked up from 8.1% in April to 8.2% in May and that job creation for the month had been much lower than expected.

A majority (55%) now say that they are hearing mostly bad news about the job situation. While that is up sharply from March (38%), it is closer to the numbers recorded late last year: 51% said this in early December and 64% in November. This measure hit a peak last August (74% mostly bad news), amid increased concern about an economic slowdown. 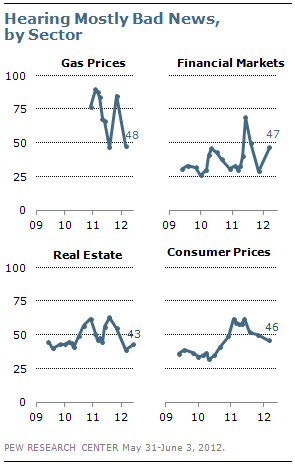 A survey released May 31 found that about half of the public said the price of gasoline had gone down over the past month. But most people living along the West Coast, where gas prices have increased, said that prices had risen. 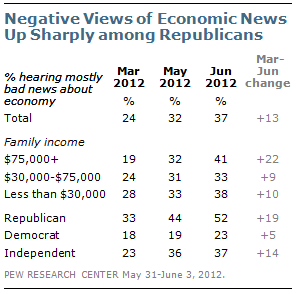 Currently, about half (52%) of Republicans say recent news about the economy has been mostly bad, up from just 33% in March. Democrats’ views of economic news have changed little over this period: 23% say economic news is mostly bad, compared with 19% who did so in March. Among independents, 37% currently views economic news negatively, a 14-point increase since March. 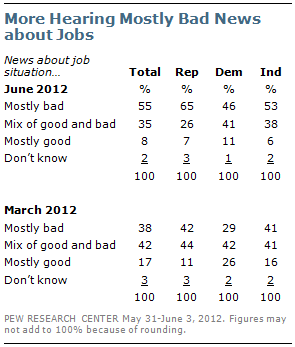