As the G-8 leaders prepare to meet at Camp David on Friday, the dominant topic of conversation will be the European debt crisis. Yet it is a crisis that has attracted minimal interest or concern among the U.S. public, despite warnings from economists that Europe’s problems may threaten this country’s fragile recovery.

Last week was typical: In the Pew Research Center’s weekly News Interest Index, just 17% said they were following news about economic problems in Europe very closely. Just 3% cited this as their top story of the week. By comparison, 40% tracked U.S. economic news very closely and 20% said they followed it more closely than any other story.

A week earlier, nearly four times as many said the death of football player Junior Seau was their top story than cited Europe’s economic problems (11% vs. 3%).

In part, the public’s lack of interest Europe’s woes is part of a broader indifference to international news. Last year, there were a number of breakthrough foreign stories, from the earthquake and tsunami in Japan to the “Arab spring.” Not this year. Aside from the deadly crash of a cruise ship off the coast of Italy in January, no international story has come close to 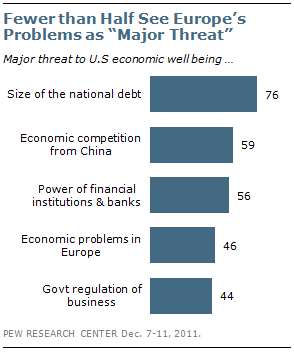 The public does not believe Europe’s financial crisis presents much of a threat to the U.S. economy. Last December, Pew Research asked about the seriousness of several possible threats to the U.S. economy. Fully 76% said the size of the national debt posed a major threat to U.S. economic well-being. Fewer than half (46%) said Europe’s economic problems represented a major threat. In terms of foreign threats, far more viewed economic competition from China as a major concern than the European crisis.

There were wide partisan differences over several possible economic threats, but not the Europe crisis. Only about half of Republicans and independents (49% each) said Europe’s economic problems represented a major threat to U.S. well-being, as did 43% of Democrats.