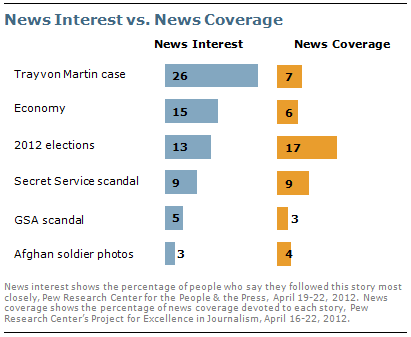 With a Florida judge clearing the way for George Zimmerman to get out of jail on bail, developments in the case against the man charged in the killing of Trayvon Martin topped Americans’ news interest last week.

About a quarter of the public (26%) says they followed developments in the case more closely than any other news, according to the latest weekly News Interest Index survey, conducted April 19-22 among 1,004 adults by the Pew Research Center for the People & the Press. The controversy over the shooting of Martin, an unarmed African American teenager, has now been the public’s top story for five straight weeks.

Coverage, though, dropped to 7% of the newshole from 17% the previous week, when Zimmerman was arrested and charged with second degree murder, according to a separate analysis by the Pew Research Center’s Project for Excellence in Journalism (PEJ). The 2012 presidential campaign received the most coverage last week, accounting for 17% of the newshole.

The second-ranking story in terms of coverage was the scandal about Secret Service agents allegedly hiring prostitutes in Cartagena, Colombia, while preparing for a visit by President Obama. That story accounted for 9% of all news coverage.

About one-in-ten (9%) say they followed news about the emerging scandal more closely than any other news, ranking it behind developments in the Trayvon Martin case (26% most closely), the economy (15%) and the presidential campaign (13%) among the week’s top stories.

Even fewer (5%) say they most closely followed news about a scandal involving excessive spending at the General Services Administration (GSA) in Washington. That story also accounted for less coverage, making up 3% of the newshole.

Looking at a separate measure, 23% say they followed news about the Secret Service scandal very closely, more than the 18% that say they followed news about the expensive conference held by the GSA in Las Vegas. The GSA investigation so far has led to the resignation of the agency’s top official and the firing of several others. Four-in-ten (40%) say they did not follow developments in the GSA story at all closely, compared with just 24% who say this about the Secret Service story. 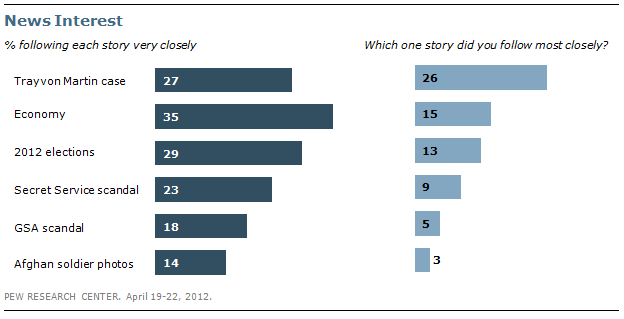 News about photographs of American soldiers posing with the corpses of dead Afghan insurgents received somewhat less public attention; 14% say they followed this news very closely, while news about the photographs was the top story for 3%. Overall coverage of the situation in Afghanistan made up 7% of the newshole last week. About half of that (4% of all coverage) focusing on the controversy over the photographs.

These findings are based on the most recent installment of the weekly News Interest Index, an ongoing project of the Pew Research Center for the People & the Press. The index, building on the Center’s longstanding research into public attentiveness to major news stories, examines news interest as it relates to the news media’s coverage. The weekly survey is conducted in conjunction with The Project for Excellence in Journalism’s News Coverage Index, which monitors the news reported by major newspaper, television, radio and online news outlets on an ongoing basis. In the most recent week, data relating to news coverage were collected April 16-22, and survey data measuring public interest in the top news stories of the week were collected April 19-22, 2012, from a nationally representative sample of 1,004 adults.