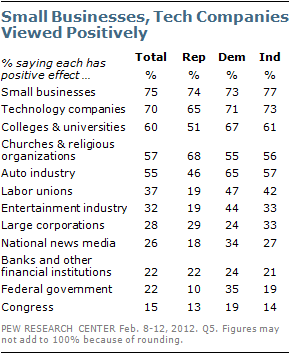 By contrast, government, banks, and large corporations continue to receive highly negative ratings. Just 15% say Congress is having a positive effect on the country; 75% say negative. Ratings of Congress have fallen from an already low rating in 2010 (24% positive effect). Evaluations of the impact of the federal government, and banks and other financial institutions, are little better than those of Congress: Just 22% say the government and banks have a positive effect on the way things are going; more than six-in-ten say the government (66%) and banks (68%) have a negative effect. Opinions about the impact of these institutions have changed little since 2010.

Republicans and Democrats generally agree in their positive evaluations of small business and technology companies and their negative views of Congress and large corporations, but there are wide partisan divides on the impact of other institutions. For example, 47% of Democrats say labor unions have a positive effect, compared with just 19% of Republicans. And while nearly two-thirds of Democrats (65%) say the auto industry has a positive impact, 46% of Republicans agree.

On balance, the federal government and the national news media are viewed more negatively than positively by both Republicans and Democrats, but Republicans express stronger distaste for both institutions than do Democrats. Republicans say the impact of the federal government on the country is negative by an 86%-10% margin. Among Democrats, the balance of opinion is still negative, but less one-sided (49%-35%). Similarly, the news media is seen as having a negative impact on the country by 76% of Republicans, compared with 50% of Democrats.