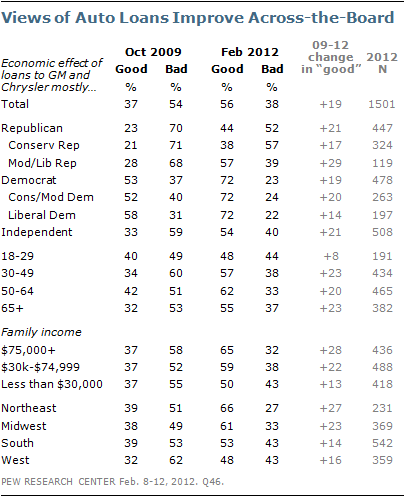 A majority of Americans (56%) now say the government loans made to GM and Chrysler in the midst of the financial crisis were mostly good for the economy, while 38% say they were mostly bad. In October 2009, almost a year after the loans were announced, public opinion was reversed: Just 37% said the loans were good, while 54% said they were bad.

Opinion about the loans to General Motors and Chrysler is particularly positive in the Northeast and Midwest. About two-thirds of Northeasterners (66%) and 61% of Midwesterners say they have been good for the economy, compared with 53% of Southerners and 48% of Westerners. While those with annual family incomes of less than $30,000 are divided in their evaluations of the loans (50% mostly good, 43% mostly bad), those with higher incomes are more positive.

Among Republicans and Republican-leaning independent registered voters, there are no significant differences of opinions about the auto loans by income or education. Mirroring the pattern within the overall public, Republicans and Republican-leaning independent voters who live in the Northeast and Midwest are more positive in their views of the auto bailout than Republicans who live in the South and West; 52% of those in the Northeast and Midwest say the loans were mostly good for the economy, compared with 36% of those in the South and West. 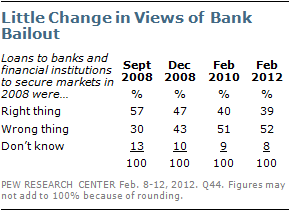 Public views of the major loans to banks and financial institutions made by the federal government in the fall of 2008 remain, on balance, negative. Today, 52% say these loans through the Troubled Asset Relief Program (TARP) were the wrong thing for the government to do, while 39% say they were the right thing. This is little changed from public opinion two years ago. Immediately following the decision to make the loans in mid-September 2008, a 57% majority said the government’s loans were the right thing to do. 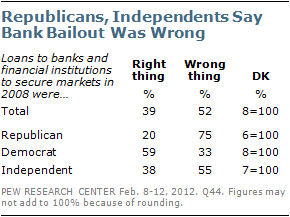 Partisans continue to differ in their views of these loans: Three-quarters of Republicans (75%) say the loans were the wrong thing for the government to do, as do a smaller majority of independents (55%). By contrast, about six-in-ten Democrats (59%) say the 2008 bank bailout was the right thing to do. 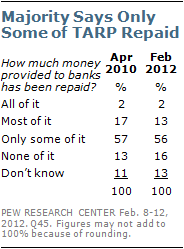 Opinions about Stimulus Less Negative than in 2010 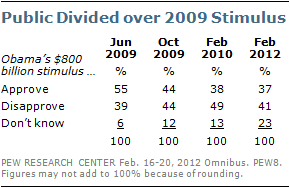 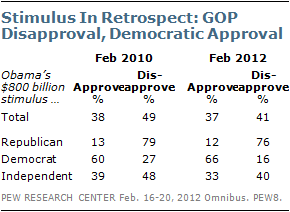 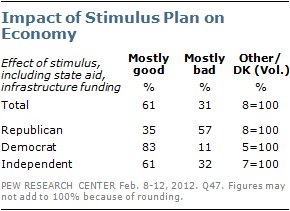 Views about the Keystone XL Pipeline

There has been recent controversy over the building of the Keystone XL pipeline that would transport oil from Canada’s oil sands to refineries along the Gulf Coast, but the public is not following this issue very closely. Just 24% say they have heard a lot about it while another 39% have heard a little; 37% have heard nothing at all about the pipeline.

Among those who have heard at least a little, there is strong public support for building the pipeline. About two-thirds (66%) think the government should approve the building of the pipeline, while 23% say it should not be approved. 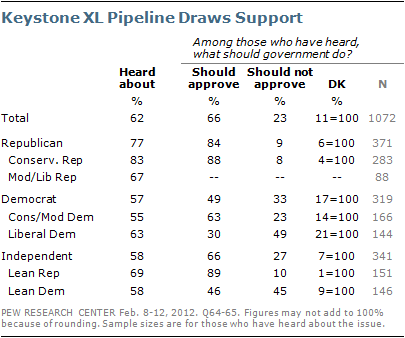 Republicans overwhelmingly support the building of the pipeline. Fully 84% say the government should approve the Keystone XL pipeline, including 88% of conservative Republicans.