The number of Americans who believe there is a great deal of political bias in news coverage has edged up to 37% from 31% four years ago. Republicans continue to express more 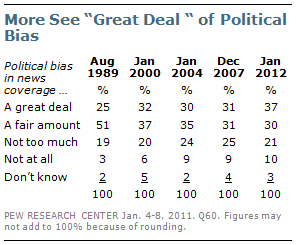 concern about media bias than do Democrats, but the rise in recent years has occurred across party lines. 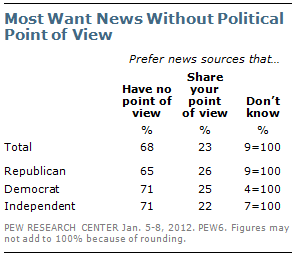 The general public’s knowledge about some of the fundamentals of the major candidates’ resumes, positions and the campaign process is rather limited. The survey, conducted Jan. 4-8 after the Iowa caucuses and before the New Hampshire primary, found 58% were able to identify Newt Gingrich as the candidate who had been speaker of the U.S. House of Representatives. Fewer than half (46%) knew that Mitt Romney was governor of Massachusetts, and just 37% could identify Ron Paul as the Republican candidate opposed to U.S.

military involvement in Afghanistan. About as many (39%) knew that the next primary after New Hampshire would be held in South Carolina. (For more about voters’ knowledge about the candidates and campaign, see “Many Voters Unaware of Basic Facts about GOP Candidates.”)

About a third of the Americans (35%) answered three or four of the questions correctly. This is somewhat higher among those who cite MSNBC (49%) or the Fox News Channel (48%) as their main television source for campaign news, as well as among those who get most of their news on the radio (48%).

Overall, people who cite the internet as their main source of campaign news do slightly better than average in terms of campaign knowledge; 42% answered at least three questions correctly. But there is a huge difference among internet users based on where they get campaign news.

Those who cite national newspapers as one of their online campaign news sources do well on the knowledge quiz: 73% answered at least three questions correctly. That compares with 50% of those who cite cable network websites. Just a third (33%) of those who get campaign news from Yahoo, Google, MSN or AOL answered at least three questions correctly.

About a quarter of the public enjoys keeping up with news about campaigns and elections a lot, but that sentiment is less common among independents and young adults. About three-in-ten Republicans (30%) and Democrats (27%) say they enjoy it a lot, compared with 17% of independents. Indeed, 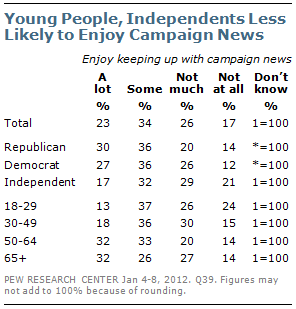 independents are as likely to say they don’t enjoy keeping up with politics at all (21%).

Among Republicans and Republican-leaning independents, those who agree with the Tea Party are much more likely than those who do not to say they enjoy political news a lot (41% vs. 16%).