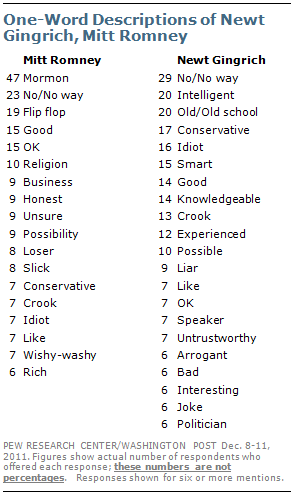 When Americans are asked what comes to mind when they hear Newt Gingrich’s name, no single word stands out. Some refer to the Republican frontrunner’s intellect and conservatism.Others see him as “old school” or even as an “idiot.” Most frequently, they offer a quick negative assessment of Gingrich’s White House bid: “no” or “no way.”

On the other hand, the most common word offered about Mitt Romney is “Mormon.” This also was the most frequently used word to describe Romney the last time this question was asked in October. Other top answers include a rejection of his candidacy – variations on “no” or “no way” – and references to criticism of the former Massachusetts governor as a “flip-flopper.”

The latest survey by the Pew Research Center for the People & the Press and The Washington Post, conducted Dec. 8-11 among 1,008 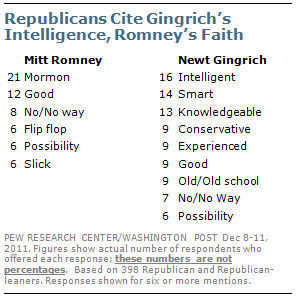 and knowledge, as well as his conservatism and his experience.

The top responses about Romney are more mixed. Just as with the public as a whole, the most frequent response refers to his religion. Others refer to him as “good” or a “good man,” simply say “no,” or say “flip-flop.”