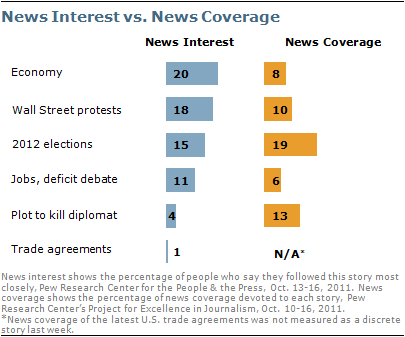 The public focused most closely last week on two interrelated news stories – the nation’s struggling economy and the anti-Wall Street protests that have now spread far beyond their beginnings in New York City.

Two-in-ten (20%) say their top story was reports about the condition of the U.S. economy. That’s about the same as the 18% that say their top story was the Occupy Wall Street protests in New York and other cities, according to the latest weekly News Interest Index survey, conducted Oct. 13-16 among 1,007 adults by the Pew Research Center for the People & the Press. One week earlier, the protests did not rank high among the public’s top stories, but as the movement has spread – and coverage has ramped up – so has public interest.

Altogether, the various economic news threads also topped coverage, accounting for about a quarter of the newshole, according to a separate analysis by the Pew Research Center’s Project for Excellence in Journalism (PEJ). More than a third of that (10% of all coverage) focused on the anti-Wall Street protests. That’s up from 7% the previous week and just 2% the week before that. News about the debate in Washington over jobs and deficit legislation accounted for 6% of coverage and more general economic news accounted for another 8%.

Among the GOP candidates, businessman Herman Cain’s visibility has surged over the past month, as he has shown increasing strength in national polls and attracted more news coverage. Nearly a quarter of the public (23%) names Cain as the candidate they have heard the most about recently in the news; in mid-September fewer than 1% named Cain as the candidate they had heard the most about.

Mitt Romney’s visibility also has increased, though more modestly, over the past month. But far fewer name Rick Perry as the Republican candidate they have heard most about recently. (The survey was conducted before the Oct. 18 GOP candidate debate.) 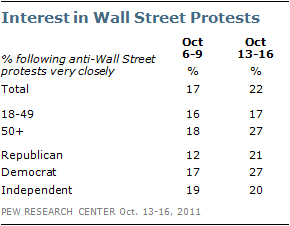 Currently, 27% of those 50 and older say they followed news about the Occupy Wall Street protests very closely last week. That’s up from 18% one week earlier. Interest among those younger than 50 is essentially unchanged (17% this week, 16% the week before).

Cain Most Heard About Republican Candidate 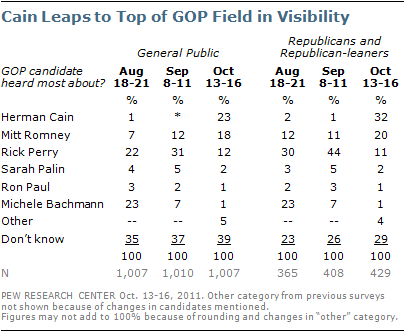 In a sign of Cain’s recent surge, about a third (32%) of Republicans and Republican-leaning independents say he is the GOP candidate they have heard most about in the news recently; 20% name Romney.

Other stories attracted less attention. Fewer than two-in-ten (16%) say they followed news about a plot allegedly orchestrated by Iran to assassinate the Saudi ambassador in Washington; 4% say this was the news they followed most closely. News about Iran, focused mostly on the allegations by the U.S. government about the assassination plot, accounted for 13% of coverage. 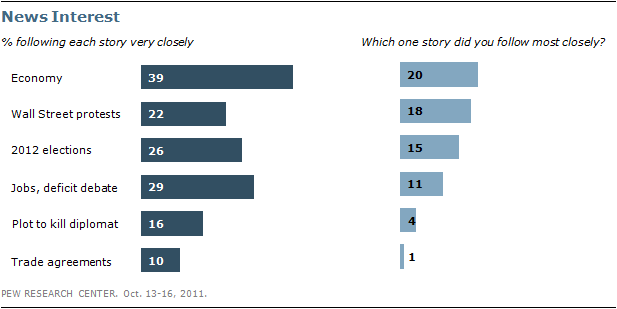 The passage of three, long-stalled free trade agreements in Congress – with Colombia, South Korea and Panama – attracted little attention from the public. One-in-ten (10%) say they followed this news very closely. Just 1% say this was the news they followed most closely. PEJ did not have a separate measure on the trade agreements. News about the pacts is included in economic news as measured by PEJ.

These findings are based on the most recent installment of the weekly News Interest Index, an ongoing project of the Pew Research Center for the People & the Press. The index, building on the Center’s longstanding research into public attentiveness to major news stories, examines news interest as it relates to the news media’s coverage. The weekly survey is conducted in conjunction with The Project for Excellence in Journalism’s News Coverage Index, which monitors the news reported by major newspaper, television, radio and online news outlets on an ongoing basis. In the most recent week, data relating to news coverage were collected Oct. 10-16, and survey data measuring public interest in the top news stories of the week were collected Oct. 13-16 from a nationally representative sample of 1,007 adults.