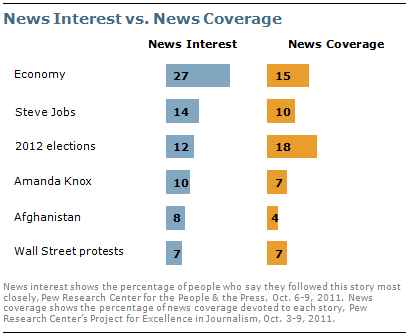 Americans continued to closely track news about the nation’s struggling economy last week, and paid only modest attention to a fast- growing media story – the anti-Wall Street protests in New York and other cities.

About a quarter (27%) say news about the condition of the U.S. economy was their top story, while just 7% cite the Occupy Wall Street protests as their top story. Looking at a separate measure, 43% say they followed economic news very closely, compared with 17% for the protests, according to the latest weekly News Interest Index survey, conducted Oct. 6-9 among 1,000 adults by the Pew Research Center for the People & the Press.

News about the spreading anti-Wall Street protests accounted for 7% of coverage, nearly four times the level of coverage one week earlier, according to an analysis by the Pew Research Center’s Project for Excellence in Journalism (PEJ). But there is significantly less public interest in the current Occupy Wall Street protests than there was in the Tea Party protests in early 2009, when they were receiving comparable levels of media coverage. And notably, partisans are about equally likely to say they are tracking the current protests very closely, a sharp contrast with the intense Republican interest in early Tea Party protests in 2009.

In mid-April 2009, news about early Tea Party protests made up 7% of news coverage, identical to the amount of coverage devoted to the anti-Wall Street protests over the past week. 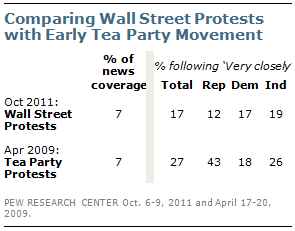 The attention to the early Tea Party protests came largely from Republicans, fully 43% of whom tracked the story very closely in April 2009. Fewer than half as many Democrats (18%) were equally engaged with the story. Today, however, there is no such disparity, with limited interest in the Occupy Wall Street protests from Republicans (12%), Democrats (17%) and independents (19%) alike. However, when asked what one story they followed most closely, Democrats are more likely than Republicans to cite the protest news (11% vs. 3%).

Steve Jobs’ Death Big News for Those Under 30 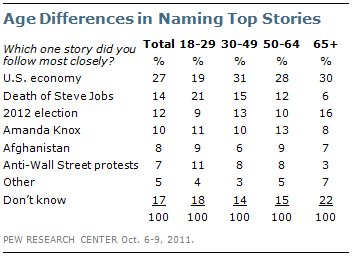 The death of Apple co-founder Steve Jobs was the top story for 14% of the public. For those under age 30, however, about as many say Jobs’ death was the news they followed most closely (21%) as cite the economy (19%). Jobs’ death – along with assessments of the impact of his life, his company and its products – accounted for 10% of coverage, according to PEJ.

Jobs’ death also registered with users of Apple products – who tend to skew young – more than the public as a whole. About four-in-ten Americans (42%) say they own an Apple device, such as an iPod, iPhone or iPad. Of that group, 21% say they followed news about Jobs’ death more closely than any other story. That is comparable to the 26% naming the economy as their top story.

Among those who do not own an Apple product, Jobs’ death garnered less interest. About one-in-ten (9%) say this was their top story, well behind the economy (27%).

Looking at the week’s other news, 13% say they very closely followed news about an Italian court reversing the murder conviction of Amanda Knox and her return to the United States; 10% say this is the story they followed most closely. Women paid greater attention to this story than men; 14% of women say this was the news they followed most closely last week, compared with 7% of men. News about Knox accounted for 7% of coverage.

And, as the U.S. marked 10 years of fighting in Afghanistan, the situation there garnered no spike in interest. Two-in-ten (20%) say they followed this news very closely, comparable to interest in early September; 8% say this was the news they followed most closely. News about Afghanistan accounted for 4% of coverage, according to PEJ. 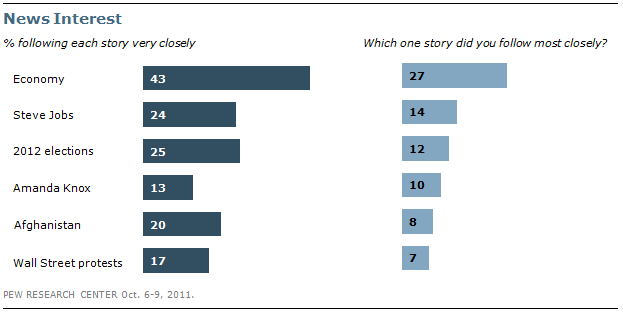 Most Heard About Christie, Palin Announcements

A quarter of the public (25%) says they followed election news very closely last week, a level of interest little changed since late summer. Boosted by heavy coverage of the announcement by New Jersey Gov. Chris Christie that he would not jump into the race, the campaign made up 18% of the newshole measured by PEJ.

In both cases, Republicans, Democrats and independents are about equally likely to have heard a lot about the announcements.

Fewer (17%) say they heard a lot about reports that Texas Gov. Rick Perry’s family had once leased a hunting camp with a racially insensitive name. Nearly six-in-ten (56%) say they heard nothing at all about this story. Again, the differences among partisans are narrow. 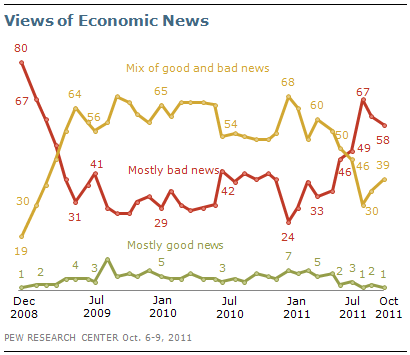 Despite the economy’s continuing troubles, more people now say they are hearing a mix of good and bad news about the economy than said so in August when negative impressions soared.

Democrats offer a somewhat more upbeat assessment of economic news than they did in August and September. In August, a solid majority of Democrats (62%) said that economic news was mostly bad, 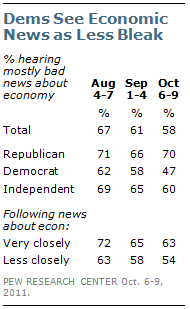 These findings are based on the most recent installment of the weekly News Interest Index, an ongoing project of the Pew Research Center for the People & the Press. The index, building on the Center’s longstanding research into public attentiveness to major news stories, examines news interest as it relates to the news media’s coverage. The weekly survey is conducted in conjunction with The Project for Excellence in Journalism’s News Coverage Index, which monitors the news reported by major newspaper, television, radio and online news outlets on an ongoing basis. In the most recent week, data relating to news coverage were collected Oct. 3-9, and survey data measuring public interest in the top news stories of the week were collected Oct. 6-9 from a nationally representative sample of 1,000 adults.