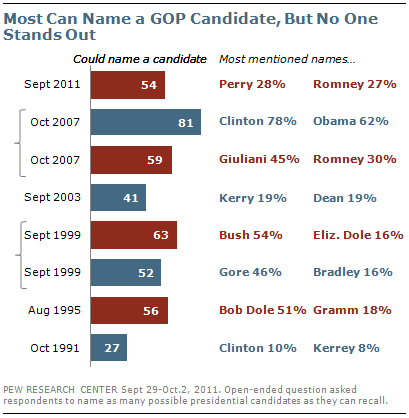 At this point in the race four years ago, Rudy Giuliani was far better known; 45% could name the former New York City mayor unprompted. Even more could name the two leading Democratic candidates at the time, Hillary Clinton (78%) and Barack Obama (62%). 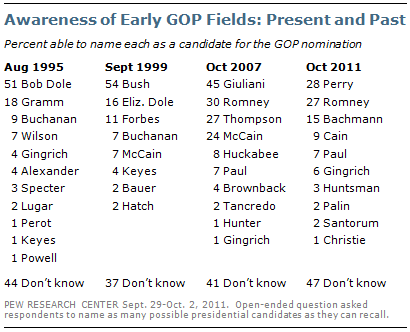 At this stage in the 2000 and 1996 Republican campaigns, far more named George W. Bush (54%) and Bob Dole (51%) than can recall the name of any of the current Republican candidates.

While Perry and Romney are running nearly even in mentions, Minnesota Rep. Michele Bachmann is running third with 15%. Herman Cain is mentioned by 9%, Ron Paul by 7% and Newt Gingrich by 6%. The other candidates are mentioned by 3% or fewer. 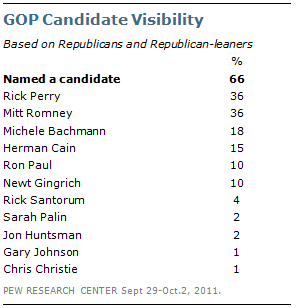 Perry and Romney receive the most mentions among Republicans and independents who lean Republican (36% each). Michele Bachmann is mentioned by 18%, Herman Cain by 15% and Ron Paul and Newt Gingrich by 10% each. Smaller numbers name the remaining candidates.

Chris Christie, who reaffirmed Oct. 4 that he is not running for president, was named by 1% of Republicans as a GOP candidate A large share of last week’s news coverage of the campaign centered on whether Christie would enter the race, according to PEJ. (See “Christie Speculation Gives Campaign Top Billing.”) 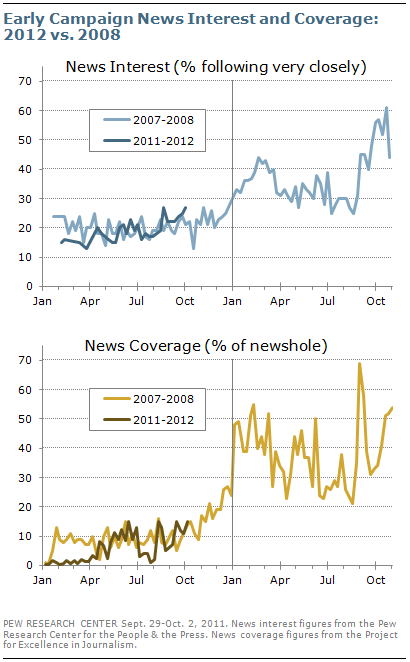 So far, interest in campaign news remains similar to the levels seen in 2007. After a slow start early in 2011, coverage – measured as a percentage of the newshole examined by PEJ – has been comparable as well.

With their party engaged in the early stages of a battle for the nomination, Republicans are now following election news more closely than are Democrats or independents. Looking at monthly averages, 32% of Republicans followed campaign news very closely each week in September. That drops to 22% among Democrats and 21% among independents.

Attentiveness among Republicans has been rising as the year has unfolded. In June, for example, an average of 25% per week said they were following news about the candidates very closely. Interest among Democrats and independents is essentially unchanged since mid-year.

Republicans followed news about the candidates much more closely this September than they did in September 2007 (32% vs. 18% very closely). On the other hand, Democrats were more attentive four years ago as Clinton and Obama fought for the nomination. In September 2007, nearly three-in-ten Democrats (28%) said they were following news about the candidates very closely, compared with 22% in September 2011. Interest among independents is comparable to four years ago (21% now vs. 18% in 2007). 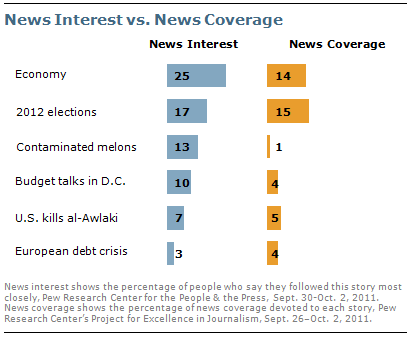 A quarter of the public (25%) says that news about the condition of the economy was their top story of the week, while 17% say they followed news about the presidential campaign most closely.

More than one-in-ten (13%) say their top story was the outbreak of illnesses linked to contaminated cantaloupes. News about the listeria outbreak accounted for just 1% of coverage measured by PEJ. Women are much more likely than men to say this was the news they followed most closely (20% vs. 6%).

A quarter of the public (25%) says they followed news about the food contamination very closely. That’s slightly less than the 31% that tracked news about an egg recall very closely in August 2010 after an outbreak of salmonella.

One-in-ten (10%) say they most closely followed news about Congress working on a budget extension to avoid a government shutdown. About three-in-ten (31%) say they followed this news very closely. The budget fight in Washington made up 4% of coverage.

Another 7% say their top story was the killing of a U.S.-born al Qaeda leader in Yemen in an attack launched by a drone airplane. About a quarter (24%) say they very closely followed news about the death of Anwar al-Awlaki. The killing of the Muslim cleric and terrorist leader made up 5% of coverage.

The economic crisis in Europe garnered only modest attention; 3% say this was the story they followed most closely, while 15% say they followed this news very closely. The debt crisis accounted for 4% of coverage. 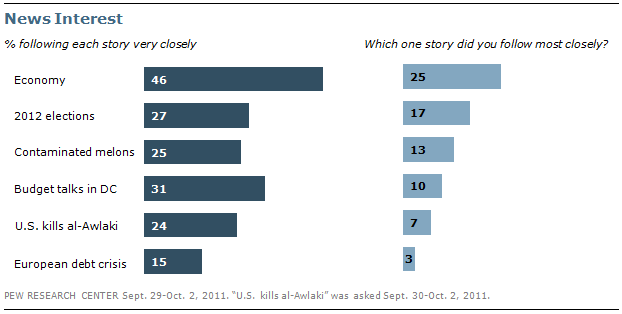 These findings are based on the most recent installment of the weekly News Interest Index, an ongoing project of the Pew Research Center for the People & the Press. The index, building on the Center’s longstanding research into public attentiveness to major news stories, examines news interest as it relates to the news media’s coverage. The weekly survey is conducted in conjunction with The Project for Excellence in Journalism’s News Coverage Index, which monitors the news reported by major newspaper, television, radio and online news outlets on an ongoing basis. In the most recent week, data relating to news coverage were collected Sept. 26-Oct. 2, and survey data measuring public interest in the top news stories of the week were collected Sept. 29-Oct. 2 from a nationally representative sample of 1,000 adults.