As the nation prepares for another round of deficit reduction debates, the public’s confidence in congressional leaders, particularly Republican leaders in Congress, has plummeted. Jus 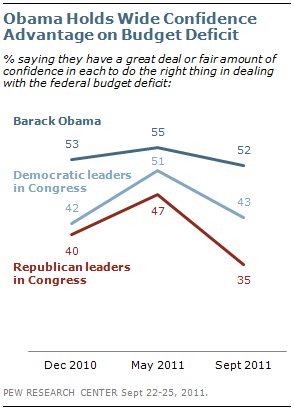 Public confidence in Barack Obama on the budget deficit, by comparison, has remained largely unchanged. The latest national survey by the Pew Research Center for the People & the Press, conducted Sept. 22-25 among 1,000 adults finds that 52% express at least a fair amount of confidence in Obama to do the right thing when it comes to dealing with the deficit, virtually unchanged from 55% earlier in the year.

The drop in confidence in GOP congressional leaders is broad based, even occurring among Republicans themselves. The share of Republicans confident in their party’s leaders on this issue has fallen from 76% four months ago to 62% today, with comparable declines among Republicans and Republican-leaning independents who agree with the Tea Party and those who do not. 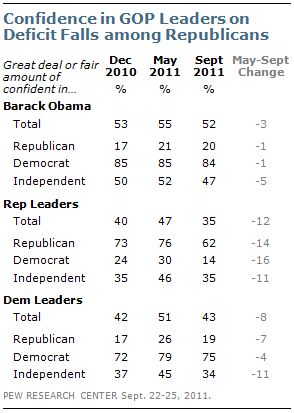 Public trust in Democratic congressional leaders has also suffered – 43% say they have a great deal or fair amount of confidence in Democratic leaders, down from 51% four months ago.

Democrats offer a more positive assessment of their leaders’ handling of the deficit than Republicans do of theirs. Fully 84% of Democrats have at least a fair amount of confidence in Obama to do the right thing regarding the deficit, and 75% are confident in Democratic leaders in Congress. This compares with 62% of Republicans who are confident in how GOP congressional leaders will handle this issue.

Proposals to Reduce Deficit and Debt 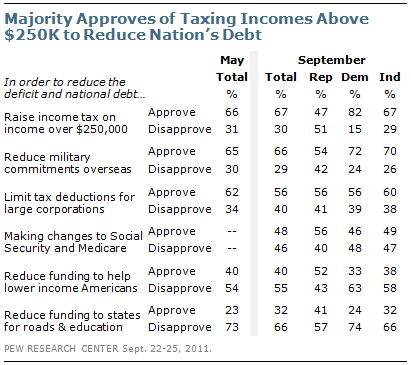 The survey also finds continued public support for raising the tax rate on high incomes as a way to reduce the federal budget deficit and the size of the national debt.

Democrats overwhelming support raising the tax rate on income over $250,000; 82% of Democrats approve of this proposal and 67% of independents agree. As was the case in May, Republicans are divided: 47% approve and 51% disapprove of higher tax rates on income in excess of $250,000.

Views of other proposals to address the deficit and national debt also have changed only modestly since May. Two-thirds (66%) approve of reducing military commitments overseas to reduce the debt while 56% approve of limiting tax deductions for large corporations. While more Democrats (72%) than Republicans (54%) approve of reducing military commitments to reduce the debt, there are no partisan differences in opinions about limiting corporate tax deductions to achieve this goal (56% of Republicans and Democrats, 60% of independents).

Most Americans continue to oppose reducing federal government spending on programs to help lower income people (55% disapprove, 40% approve) to reduce the budget deficit and national debt. And two-thirds (66%) disapprove of reducing federal support to states for things like education and roads, while only about half that number (32%) approves of this proposal.