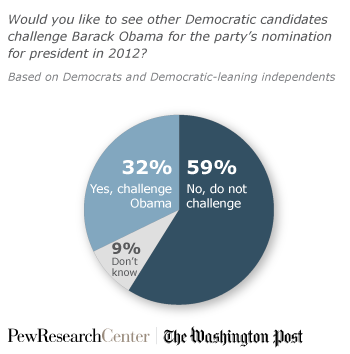 Despite speculation that the Democratic base has become increasingly disillusioned with Barack Obama, rank-and-file Democrats are not eager to see other candidates challenge him for their party’s nomination in 2012. Just 32% of Democrats and Democratic-leaning independents say they would like other Democrats to take on Obama for the 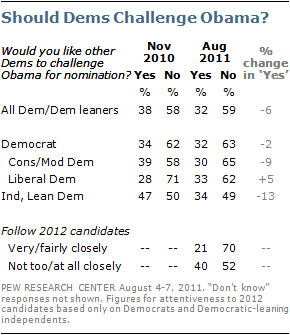 nomination, while 59% say they would not.

There has been little change in Democrats’ views about whether Obama should face a nomination challenge since last fall. In November, shortly after the midterm election, 38% of Democrats and Democratic leaners favored a primary challenge to Obama while 59% were opposed.

Far fewer Democrats want to see Obama challenged for the nomination than supported a primary challenge to Bill Clinton in December 1994. At that time, 66% of Democrats and Democratic leaners wanted to see Clinton challenged, shortly after the GOP won control of Congress for the first time in 40 years.

The latest survey by the Pew Research Center for the People & the Press and The Washington Post, conducted August 4-7, 2011 among 428 Democrats and independents who lean to the Democratic Party, finds little difference between liberal Democrats and the party’s conservatives and moderates in opinions about whether Obama should face a challenge for the nomination. Only about a third in each group want to see Obama challenged (33% of liberal Democrats, 30% of conservative and moderate Democrats). In November, conservative and moderate Democrats had been somewhat more inclined than liberals to say they wanted challengers to Obama (39% vs. 28%).

Independents who lean to the Democratic Party also are less likely to favor a primary challenge to Obama than last November. Currently, 34% express this view, compared with 47% in November 2010.

Perhaps reflecting concerns about the outcome of the general election, Democrats and Democratic leaners who are following news about the 2012 presidential candidates very closely are much less likely to favor a primary challenge to Obama than are those who are following the election less closely (21% vs. 40%).