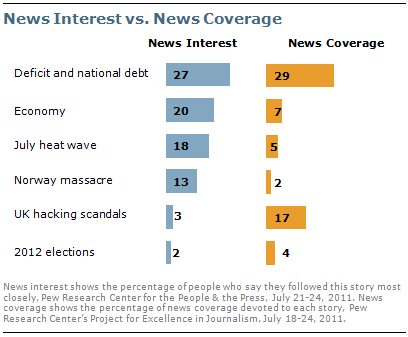 With a deadline fast approaching and talk of serious economic consequences without congressional action, the standoff in Washington over raising the debt limit was the top story last week for both the public and the news media.

Yet public interest in the federal budget deficit and national debt is not much higher than it was the previous week, even with the Aug. 2 deadline on a possible default drawing closer.

Currently, 38% say they followed news about the debt limit debate very closely, little different from the 34% that said this one week earlier according to the latest Weekly News Interest Index survey, conducted July 21-24 among 999 adults by the Pew Research Center for the People & the Press. The survey was conducted before the prime-time speeches on July 25 by President Obama and House Speaker John Boehner.

About a quarter (27%) cited the deficit and debt talks as their most closely followed story this week, while 20% cited news about the economy and 18% mentioned the intense heat wave sweeping much of the nation. The stalemate over raising the debt ceiling was more dominant in terms of news coverage, accounting for 29% of the newshole, acco 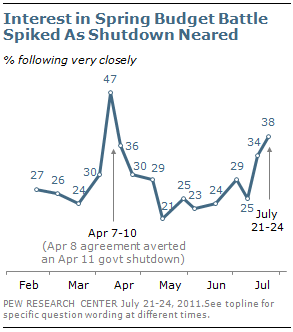 rding to a separate analysis by the Pew Research Center’s Project for Excellence in Journalism. The next most heavily covered story, at 17% of all coverage, was the British press scandal, which has attracted little public interest.

Public interest in the debt stalemate has risen over the past month, from 29% during the first week of July to 38% this week. Interest is well below the 47% who tracked the budget showdown in early April, but that survey was conducted over the final weekend before a government shutdown loomed. The week earlier – roughly comparable in time to this week – just 30% were following the shutdown debate very closely. 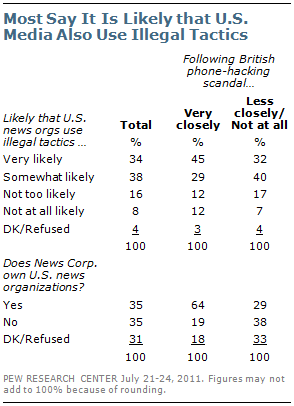 While the media scandal in England involving newspapers owned by Rupert Murdoch’s News Corporation accounted for 17% of last week’s coverage, public interest in the U.S. remained relatively modest: 16% say they very closely followed news about how newspapers owned by Murdoch’s corporation may have hacked into people’s phones and illegally obtained financial and medical records. Just 3% say this was the news they followed most closely.

About seven-in-ten Americans (72%) say they think it is at least somewhat likely that U.S. news organizations use tactics similar to those used by the British newspapers at the center of the scandal to gather personal information about subjects of their reporting.

Comparable numbers of partisans say that American news organizations are very likely to use the same tactics; 32% of Republicans and 27% of Democrats say this. Among independents, 39% agree.

When people are asked whether Murdoch’s News Corp. owns any major news organizations in the United States, just 35% correctly answer that it does. Another 35% say the company does not and 31% say they do not know.

Partisans are about equally likely to answer this question correctly. Those following news about the scandal very closely, however, are much more likely to know that News Corp. owns media organizations in the U.S. than those following less closely (64% vs. 29%).

Among the companies owned by News Corp. are the Fox Cable News Channel, The Wall Street Journal newspaper, the Dow Jones Newswires and The New York Post newspaper.

About half of those who correctly say that News Corp. does own media organizations in the U.S. (18% of the total) mention the Fox News Channel when asked to name a specific entity owned by Murdoch’s company, 7% name The Wall Street Journal and 2% name The New York Post.

With the administration saying that the government will be unable to pay all of its bills as of Aug. 2 if the standoff is not resolved, the public continues to focus closely on the debate over raising the federal debt limit. Partisans are about equally likely to say they are following this news very closely (37% of Republicans, 41% of Democrats and 38% of independents).

Nearly four-in-ten (38%) say they very closely followed news about the heat wave that stuck much of the country at the end of the week. This was the top story for 18%. News about the record setting temperatures accounted for 5% of coverage, according to PEJ. 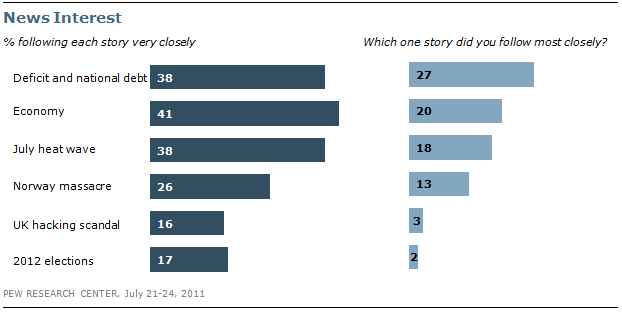 About a quarter (26%) say they very closely followed reports about the bombing and deadly shooting spree in Norway on Friday; 13% say this was the news they followed most closely. Because the survey was already in the field when the attacks occurred, a question was added for the final two days, half of the survey period. 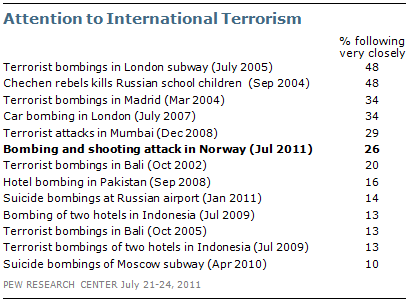 Coming so late in the week, the attacks, apparently perpetrated by a 32-year-old Norwegian, accounted for only 2% of the week’s coverage. PEJ says the incidents accounted for 10% of coverage on Friday.

Fewer than two-in-ten (17%) say they very closely followed news about the 2012 elections last week; 2% say this was the news they followed most closely. News about the elections accounted for 4% of coverage.

These findings are based on the most recent installment of the weekly News Interest Index, an ongoing project of the Pew Research Center for the People & the Press. The index, building on the Center’s longstanding research into public attentiveness to major news stories, examines news interest as it relates to the news media’s coverage. The weekly survey is conducted in conjunction with The Project for Excellence in Journalism’s News Coverage Index, which monitors the news reported by major newspaper, television, radio and online news outlets on an ongoing basis. In the most recent week, data relating to news coverage were collected July 18-24, and survey data measuring public interest in the top news stories of the week were collected July 21-24 from a nationally representative sample of 999 adults.