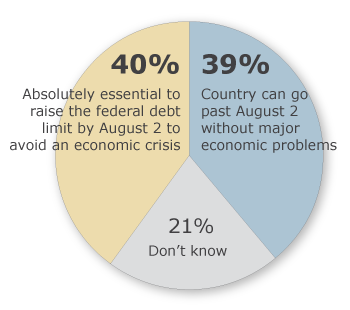 While administration officials project an economic catastrophe if the debt limit is not raised by Aug. 2, many Americans do not see this deadline as a major problem. Four-in-ten (40%) say that, from what they’ve read and heard, it is absolutely essential that the federal debt limit be raised by Aug. 2 to avoid an economic crisis, while about as many (39%) say the country can go past this date without major economic problems.

By a 53% to 30% margin, most Republicans say that it will not be a major problem if the debt ceiling is not raised by Aug. 2. The balance of opinion is the reverse among Democrats: 56% say it is absolutely essential to meet that deadline to avoid an economic crisis, 28% say it is not. Independents are more divided, though a slim 43% plurality say the country can go past Aug. 2 without major economic problems, while 32% say it is essential to raise the debt limit by this date. 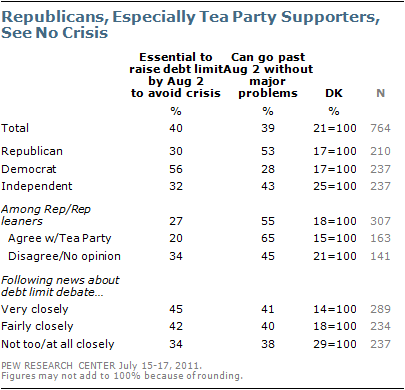 Notably, the degree of attention to this issue has only a modest relationship with peoples’ impressions of the seriousness of the Aug. 2 deadline. Those who are following the issue very closely are divided over whether it is essential to raise the debt limit by Aug. 2 to avoid crisis – 45% say it is essential, 41% say it is not. Those who are following the story less closely also are divided.