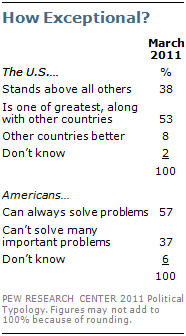 Despite the struggling economy and broad dissatisfaction with national conditions, the public has a positive view of the United States’ global standing. But more think that the U.S. is one of the greatest countries in the world than say it stands above all other countries.

As in the past, the public remains confident in the nation’s ability to solve major problems. Nearly six-in-ten (57%) say that “as Americans, we can always find ways to solve our problems and get what we want.” Just 37% say “this country can’t solve many of its important problems.” Opinions are little changed from previous surveys. In 2004, 59% expressed confidence in the American people’s ability to tackle major problems.

These findings come from the Pew Research Center’s 2011 Political Typology survey, conducted in February and March and released May 4, 2011. The survey shows wide partisan differences in views of America’s global standing: 52% of Republicans say the U.S. stands above all other countries compared with just a third each of Democrats and independents. 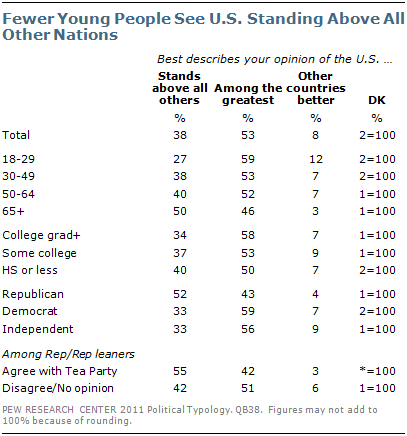 Across all political and demographic groups, large majorities say that the United States either ranks among the greatest nations or stands above all others. Very few – no more than about 10% – say that there are other countries that are better than the U.S.

The Typology and U.S. Global Standing 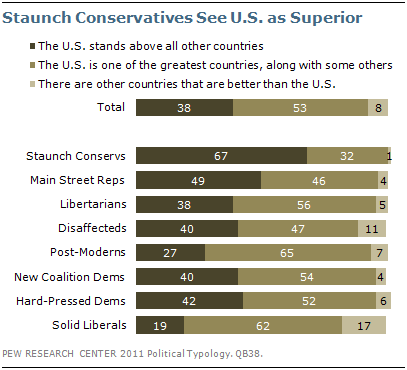 The political typology sorts people into cohesive groups based on their values, political beliefs and partisan affiliation. Among the eight major typology groups, Staunch Conservatives – who are strongly anti-government and pro-business – are the only one in which a majority (67%) says that the U.S. stands above all other nations.

The other core Republican group – Main Street Republicans – are evenly split: 49% say the U.S. stands above all other countries while nearly as many (46%) say it is one of the greatest countries along with some others.

Majorities in the three core Democratic groups – Solid Liberals (62%), New Coalition Democrats (54%) and Hard-Pressed Democrats (52%) – say the U.S. is among the greatest countries, along with some others. 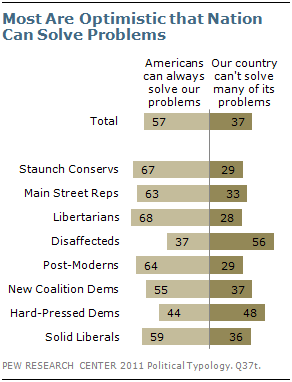 In opinions about whether the American people can solve major problems, the typology groups split mostly on economic, rather than partisan, lines. Republican-leaning Disaffecteds, the typology group hardest hit by the recession, are the least optimistic about the nation’s ability to solve major problems. Fully 56% of Disaffecteds say “this country can’t solve many of its important problems.”

Nearly half (48%) of Hard-Pressed Democrats – another economically stressed group – express skepticism about the country’s ability to deal with major problems. But majorities in all other typology groups say that Americans are able to solve their problems and get what they want.