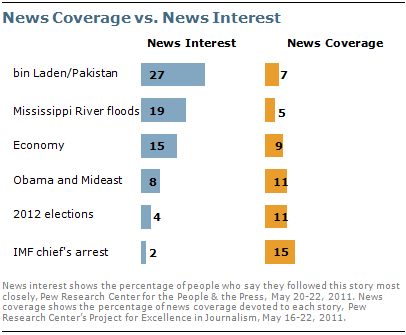 Americans continued to express strong interest in news about the death of Osama bin Laden and its ramifications last week, even as news coverage of the story continued to decline.

About a quarter of the public (27%) says they followed reports about the killing of bin Laden and its impact on U.S. relations with Pakistan more closely than any other story, according to the latest weekly News Interest Index survey conducted May 19-22 among 1,004 adults by the Pew Research Center for the People & the Press.

No one story dominated coverage, but the media devoted 15% of the newshole last week – more than for any other story – to the attempted rape charges brought in New York against Dominique Strauss-Kahn, then the top official at the International Monetary Fund (IMF). Just 2% say this was the news they followed most closely.

In contrast, on a separate measure, however, a 51% majority say they heard a lot about Arnold Schwarzenegger’s acknowledgment last week that he had fathered a child with a woman who worked in his household.

Meanwhile, coverage of the bin Laden’s death continued to drop. The week following President Obama’s May 1 announcement that the al Qaeda leader had been killed by American forces in Pakistan, the story accounted for 69% of coverage. One week later, coverage was down to 24%. Last week it accounted for 7% of the newshole, according to an analysis by Pew Research Center’s Project for Excellence in Journalism (PEJ). More than one-in-three Americans say they followed the bin Laden story very closely (36%), about the same as the 37% that said this one week earlier.

The public showed more interest in news about flooding along the Mississippi River and the continuing struggles of the U.S. economy than in news about the former IMF leader, Strauss-Kahn. About two-in-ten (19%) say they followed news about the flooding most closely, while 15% say the economy was their top story.

The flooding accounted for 5% of coverage, while the economy accounted for 9%. A third of the economic coverage (3% of the total) dealt with the debate in Washington over the federal deficit and whether to raise the nation’s debt ceiling.

Nearly one-in-ten (8%) say their top story for the week was Obama’s speech about the Middle East and his meeting with Israeli Prime Minister Benjamin Netanyahu the next day at the White House. Two-in-ten (20%) say they followed this news very closely.

The media devoted 11% of coverage to the story, highlighting both Obama’s speech about the changes underway in the region and his tense meeting with Netanyahu. The Israeli leader objected to Obama’s call to use 1967 boundaries as a starting point for negotiations over creation of a Palestinian state.

Coverage of the beginning stages of the 2012 presidential campaign reached its high for the year at 11% of newshole, though public interest remained modest. Just 15% say they followed news about the campaign very closely, equaling the number from one week earlier; 4% say this was the news they followed most closely. Republicans and Democrats are about equally likely to say they followed this news very closely (20% and 16%, respectively). Among independents, 12% say this.

More than eight-in-ten Americans heard at least a little last week about the admission by Arnold Schwarzenegger, the actor and former California governor, that he was the father of a child born to a member of his household staff. About half (51%) say they heard a lot about this, while 35% say they heard a little. Just 13% say they heard nothing at all about this. 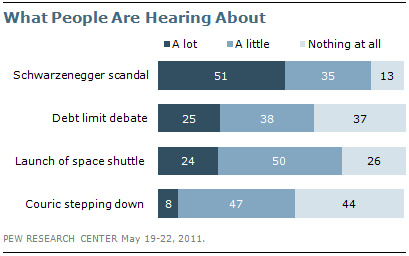 Nearly six-in-ten women (57%) say they heard a lot about Schwarzenegger’s admission, compared with 44% of men. The revelations about the child came shortly after the announcement that Schwarzenegger and his wife, Maria Shriver, were separating. Last week, the story accounted for 5% of coverage.

Fewer had heard a lot about several other stories, including the debate in Washington over whether to raise the federal debt limit, the launch of the space shuttle Endeavor and Katie Couric’s last day as anchor for the CBS Evening News.

About a quarter (24%) say they heard a lot about the launch of the space shuttle. Another 50% heard a little about this, while 26% heard nothing at all.

These findings are based on the most recent installment of the weekly News Interest Index, an ongoing project of the Pew Research Center for the People & the Press. The index, building on the Center’s longstanding research into public attentiveness to major news stories, examines news interest as it relates to the news media’s coverage. The weekly survey is conducted in conjunction with The Project for Excellence in Journalism’s News Coverage Index, which monitors the news reported by major newspaper, television, radio and online news outlets on an ongoing basis. In the most recent week, data relating to news coverage were collected May 16-22, and survey data measuring public interest in the top news stories of the week were collected May 19-22, from a nationally representative sample of 1,004 adults.