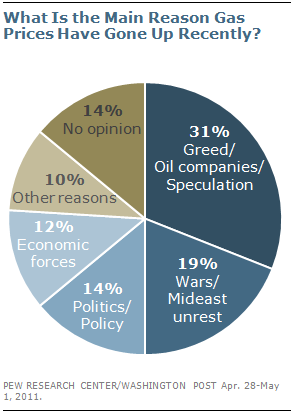 As gas prices soar, many Americans pin the blame on greed or a push for higher profits among oil companies, speculators and oil-producing nations.

About three-in-ten (31%) offer a variation on this theme – greed, oil companies or speculation – when asked what they think is the main reason gasoline prices have gone up recently, according to a Pew Research Center/Washington Post survey conducted April 28-May 1 among 1,006 adults. 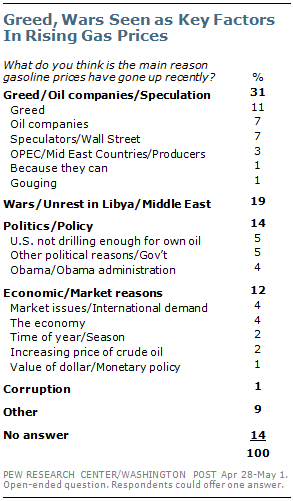 Roughly two-in-ten (19%) cite the ongoing wars or unrest in Libya and elsewhere in the Middle East as the top reason for rising fuel prices. Another 14% attribute this to politics or national policies.

Just more than one-in-ten (12%) blame market factors, such as competition with other nations for limited supply (4%) or the approaching summer season (2%).