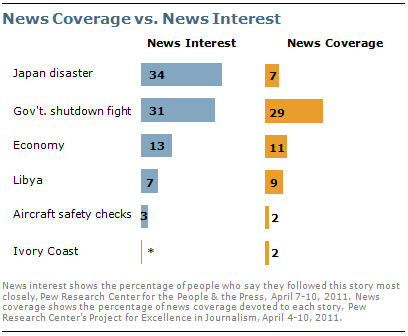 The public divided its attention last week between two major stories: the aftermath of the deadly earthquake and tsunami in Japan and the budget battle in Washington that nearly led to a government shutdown.

About a third say they followed news about the aftermath of the disasters in Japan (34%) or the budget brinksmanship (31%) more closely than any other major story, according to the latest News Interest Index survey, conducted April 7-10 among 1,004 adults. No other story comes close this week.

For its part, the media devoted the most coverage to the budget drama that played out in Washington and the last-minute compromise that averted a shutdown last weekend. This story accounted for 29% of coverage – roughly four times the amount of coverage devoted to the Japan disaster (7%) and far more coverage than for any other story, according to a separate analysis by the Pew Research Center’s Project for Excellence in Journalism (PEJ).

For much of 2011, foreign news stories – starting with pro-democracy protests in Egypt, followed by the Japan earthquake and tsunami and then the allied airstrikes against Libya – have dominated the media’s agenda. (See “Public Stays Focused on Japan as Media Turns to Libya, March 30.”) But that changed this week, as the budget showdown accounted for nearly twice the coverage of Japan and Libya combined.

Interest in the Week’s Top Stories

Interest in the budget fight increased as the sides reached an agreement just before mid-night on April 8 on major spending cuts for the remainder of the 2011 fiscal year. In interviewing conducted prior to the deal (April 7-8), 43% followed news about the threat of a government shutdown very closely. After the agreement (April 9-10), 51% of those interviewed say they followed this news very closely.

For the entire survey period (before and after the agreement), there are no partisan differences in interest in the budget fight. About half of Democrats (51%), Republicans (49%) and independents (45%) say they followed this news very closely. Among Republicans and GOP-leaning independents who agree with the Tea Party, 58% say they followed the budget news very closely. That drops to 40% among all other Republicans and GOP-leaners. 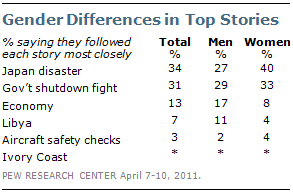 Interest in the aftermath of the disasters in Japan also remained strong, despite a continuing decline in coverage. Four-in-ten women (40%) say they followed news about Japan most closely, compared with 27% of men.

While the economy trailed Japan and the budget fight as a top story, at least four-in-ten in most demographic and partisan groups say they followed economic news very closely. Economic news accounted for 11% of coverage, including reporting on the 2012 federal budget plan unveiled last week by House Budget Committee Chairman Paul Ryan.

Two-in-ten (20%) say they very closely followed news about new safety checks on Boeing 737 airplanes after a piece of a jet’s roof ripped open during a Southwest Airlines flight; 3% say this was the news they followed most closely last week. News about airline safety issues accounted for 2% of coverage.

About one-in-ten (8%) say they followed news about violent conflict in the African nation of Ivory Coast very closely. Less than 1% say this was their top story of the week. The unrest in Ivory Coast accounted for 2% of coverage.

These findings are based on the most recent installment of the weekly News Interest Index, an ongoing project of the Pew Research Center for the People & the Press. The index, building on the Center’s longstanding research into public attentiveness to major news stories, examines news interest as it relates to the news media’s coverage. The weekly survey is conducted in conjunction with The Project for Excellence in Journalism’s News Coverage Index, which monitors the news reported by major newspaper, television, radio and online news outlets on an ongoing basis. In the most recent week, data relating to news coverage were collected April 4 to 10, and survey data measuring public interest in the top news stories of the week were collected April 7 to 10, from a nationally representative sample of 1,004 adults.

Public Follows Both Japan, Shutdown Fight Closely
Summary of FindingsInterest in the Week’s Top Stories
About the News Interest Index