As the budget debate moves into a crucial phase, far fewer Americans say that Republicans in Congress have the better approach to the budget deficit than did so in November, shortly after the GOP’s sweeping election victories. The GOP has lost ground on the deficit among political independents and, surprisingly, among key elements of the Republican base, including Tea Party supporters. 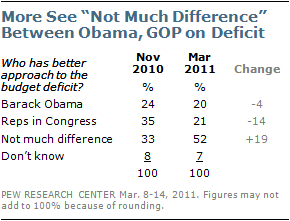 However, the public is no more supportive of Barack Obama’s approach to the budget deficit than it was in November. Rather, there has been a sharp rise in the percentage saying there is not much difference between Obama’s approach and that of congressional Republicans – 52% say that now, up from just 33% in November.

The latest nationwide survey by the Pew Research Center for the People & the Press, conducted March 8-14 among 1,525 adults, finds that the public’s economic worries also have changed substantially over the past few months. 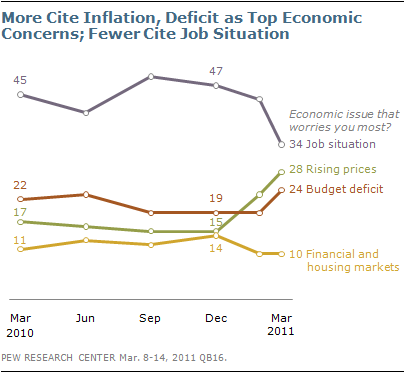 While the job situation is the top economic concern, the percentage citing rising prices as their biggest economic worry has nearly doubled from 15% in December to 28% today. And at 24%, the number saying the federal budget deficit is their top concern also has risen, from 19% in December and February.

Roughly a third (34%) say the job situation is their biggest economic concern, but this is down substantially from 44% a month ago and 47% as recently as December. 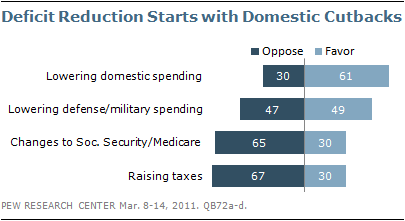 As Congress considers a new stopgap spending bill, nearly half of Americans (49%) say that the debate over the deficit and spending has been generally rude and disrespectful while just 27% say the debate has been polite and respectful. In contrast to attitudes about the deficit and government spending, which are divided along partisan lines, there is agreement about the tone of the debate: 48% of Republicans and Democrats, and 57% of independents, say the debate has been rude and disrespectful.

Neither Side Has Edge on Deficit 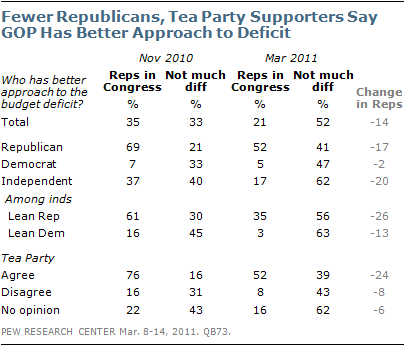 Over this period, the percentage saying there is not much difference between the two sides has jumped from 33% to 52%.

The proportion of Tea Party supporters who say Republicans in Congress have a better approach than Obama has fallen 24 points – from 76% to 52% – since November.

Independents also are far less supportive of the Republicans’ approach to the budget deficit. In November, 37% favored the GOP’s approach, while fewer than half as many (17%) preferred Obama’s; 40% said there was not much difference. In the new survey, 17% of independents say Republicans have a better approach, 13% prefer Obama’s approach while 62% say there is not much difference. Much of the change has come among Republican-leaning independents. Today just 35% of Republican-leaning independents say the GOP has a better approach to the deficit, down from 61% in November.

Mixed Views of Impact of Spending Cuts on Jobs 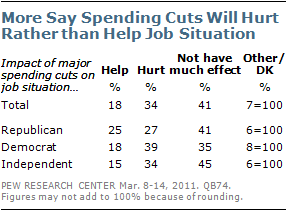 A modest plurality (41%) says that if the federal government makes major spending cuts to reduce the deficit, these reductions will not have much of an effect on the job situation. Among those who see the cuts have an impact, nearly twice as many say they will hurt (34%) rather than help (18%) the job situation. 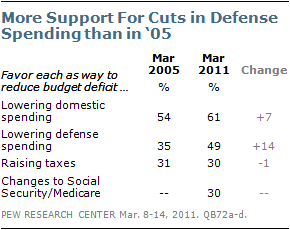 Of four broad approaches to tackling the federal budget deficit, only reductions in domestic spending are broadly supported. By two-to-one (61% vs. 30%) more favor than oppose lowering domestic spending as a way to reduce the budget deficit. The public is divided about evenly (49% favor, 47% oppose) when it comes to lowering defense and military spending, and opposition outweighs support by wide margins when it comes to raising taxes (67% oppose) or making changes to Social Security or Medicare (65% oppose). 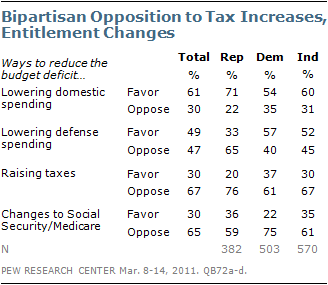 While there are significant partisan divisions on all of these deficit reduction approaches, partisan views differ most when it comes to defense spending. By a 57% to 40% margin Democrats favor lowering defense and military spending to deal with the deficit. By a 65% to 33% margin Republicans are opposed.

On domestic spending, majorities across party lines favor reductions, though the sentiment is broader among Republicans (71% favor) than among Democrats (54%). And when it comes to raising taxes or changing entitlements, majorities of Democrats, Republicans and independents are opposed.

Independents tend to agree with Democrats in favoring cuts to defense and military spending, while only Republicans are opposed. But independent views are closer to Republicans when it comes to changing entitlements – 36% of Republicans and 35% of independe 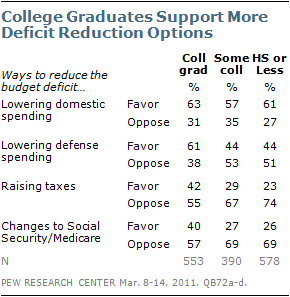 nts favor entitlement changes, compared with only 22% of Democrats. 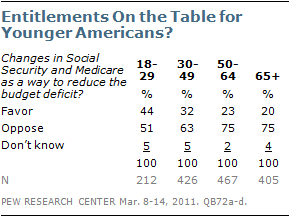 Not surprisingly, the idea of changing entitlements is particularly sensitive to older Americans. Fully 75% of people 65 and older oppose changing Social Security and Medicare as a way to reduce the budget deficit, and 75% of those 50 to 64 agree. But younger people are less opposed to entitlement changes. In particular, among adults younger than 30, barely half (51%) oppose changing Social Security and Medicare, while 44% express support.

For more on the public’s attitudes regarding government spending and proposals for reducing the budget deficit, see:

Fewer Want Spending to Grow, But Most Cuts Remain Unpopular, Feb. 10, 2011. This report showed that while the public generally favors cuts in domestic spending, there is little support for cuts in specific programs. Nonetheless, the public is less inclined to favor increased spending for many programs than in the past.

Deficit Solutions Meet With Public Skepticism, Dec. 9, 2010. The public disapproves of most specific proposals aimed at reducing the budget deficit. Despite the broad reluctance to see changes in entitlement programs, a solid majority approves of making more of high earners’ income subject to Social Security tax.

A Shift in Top Economic Concerns 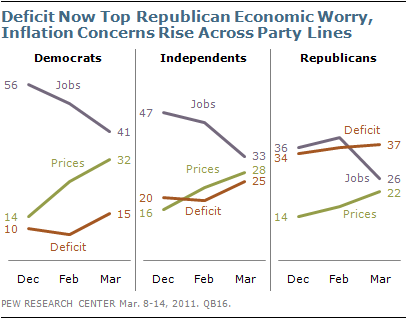 Over the course of the last three months, the number of Americans who cite rising prices as their biggest economic worry has nearly doubled from 15% in December to 28% today. And at 24%, the number saying the federal budget deficit is their top concern has also risen over just the past month.

The job situation remains the most widely cited economic concern – 34% say it worries them more than anything else – but this is down substantially from 44% a month ago and 47% as recently as December. 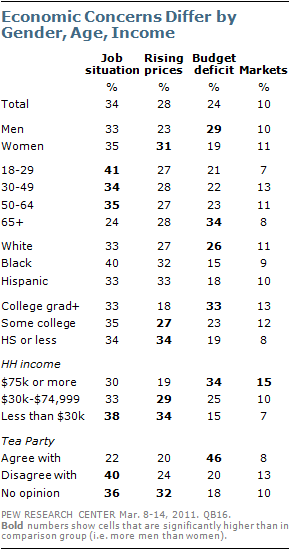 The focus on prices has risen across party lines, as 32% of Democrats, 28% of independents, and 22% of Republicans now say that rising prices represent their top economic worry today. And the share citing jobs as their number one concern is down across party lines, particularly among Republicans (26%) and independents (33%). The job situation remains the broadest concern among Democrats (41%), though this, too, is down from 56% in December.

Nearly half (46%) of Americans who agree with the Tea Party cite the deficit as their top economic concern, more than double the number among those who disagree with (20%) or have no opinion about (18%) the Tea Party.

Economic worries also differ by age. Among adults under age 65, a 36% plurality cites the job situation as their top concern, compared with 24% of Americans age 65 and older. Seniors, by contrast, are more likely to cite the budget deficit as their top concern than those who are under 65 (34% vs. 22%).

Despite changing perspectives on which economic problem is the greatest concern, the public’s overall assessment of national conditions has changed little. Just 22% of Americans say they are satisfied with the state of the nation, while 73% are dissatisfied.

This is significantly better than the historic lows in the immediate wake of the 2008 market crash; in October 2008 just 11% of Americans were satisfied while 86% were dissatisfied. Yet the current mood is on par with the lowest measures over the course of Obama’s term in office, and down substantially from the 34% who were satisfied with national conditions in May of 2009. 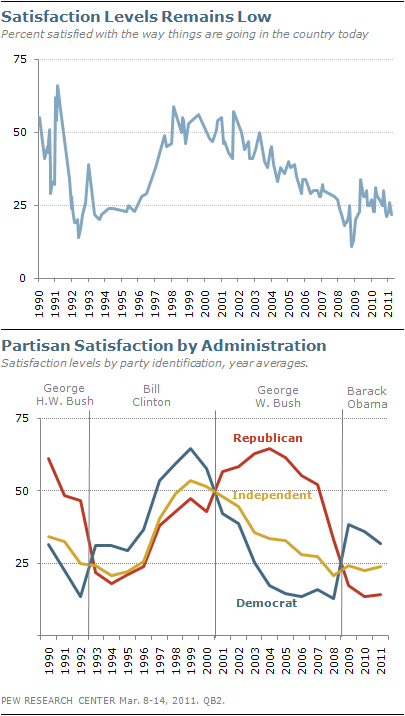 To the extent that the public’s mood has soured over the past two years, the shift has occurred mainly among Democrats. In May 2009, 44% of Democrats were satisfied with national conditions. That dropped to 35% by March 2010, and stands at just 25% today. About the same percentage of independents (24%) expresses positive views of national conditions, while Republicans are less upbeat (14%).

The partisan gap in national satisfaction today is comparable to previous time periods. As a rule, satisfaction is higher among members of the president’s party. Since 1990, Democrats were significantly more satisfied with national conditions than Republicans during both the Clinton and Obama administration, while Republicans were significantly more satisfied under both Bush administrations. Looking at yearly averages, the partisan gap reached a peak in 2004, when 65% of Republicans were satisfied, compared with just 17% of Democrats. So far in 2011, the partisan divide is much smaller: an average of 32% of Democrats and 14% of Republicans have expressed satisfaction during the first three months of this year.

Republicans Are Losing Ground on the Deficit, But Obama’s Not Gaining
OverviewNeither Side Has Edge on DeficitMixed Views of Impact of Spending Cuts on JobsApproaches to Deficit ReductionA Shift in Top Economic ConcernsNational Satisfaction Still Low
About the Surveys