Neither the trouncing of the Democratic Party in the midterm elections nor the surprising legislative accomplishments of the “lame duck” Congress has had a measurable effect on opinions of Barack Obama. The president’s approval ratings have been rock steady since late August and his personal image has changed very little since the middle of last year. 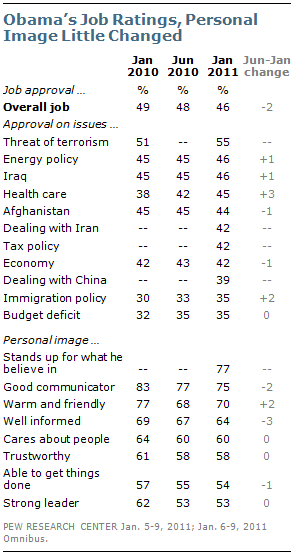 Currently, 46% say they approve of how Obama is handling his job while 44% disapprove. The public is similarly divided on other general measures of his job performance. One-in-four (25%) think that in the long run, Obama will be a successful president, while about the same number (26%) believes that he will be unsuccessful. And 47% think that Obama’s accomplishments will be good for the country in the long run, compared with 42% who do not.

At a comparable point in his presidency, the public took a less negative view of Ronald Reagan’s accomplishments; in January 1983, 50% said the things he had done would be good for the country compared with 31% who said they would be bad.

However, Americans are more upbeat about Obama’s presidency than they were about Bill Clinton two years into his first term. In February 1995, just 18% thought Clinton would be a successful president while nearly twice as many (34%) said he would be unsuccessful.

The latest national survey by the Pew Research Center for the People & the Press, conducted Jan. 5-9 among 1,503 adults, was largely completed before the Jan. 8 shootings in Tucson that killed six and left Rep. Gabrielle Giffords critically wounded. The survey finds that while the public is divided over Obama’s job performance, his personal image remains on balance positive.

One area of relative consensus is that Obama sticks to his convictions. By an overwhelming 77% to 16% margin, Obama is seen as “someone who stands up for what he believes in.” This view is shared by 89% of Democrats (including nearly identical percentages of liberals and non-liberals), 79% of independents and 67% of Republicans.

Ratings of Obama’s performance across a range of specific issues are less glowing. Most approve of his handling of terrorist threats and a narrow plurality gives him the nod when it comes to energy policy. But public reactions are mixed across a host of other issues — his handling of Iraq, Afghanistan, Iran and China internationally, and his handling of health care and tax policy domestically. And substantially more disapprove than approve of Obama’s handling of the economy, the budget deficit and immigration policy. 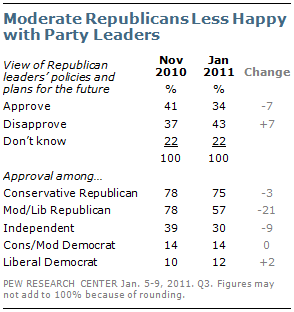 While Obama’s overall job performance measure has held steady since the midterm election, this has not been the case for the Republican congressional leaders. The new survey finds the public disapproving of their policies and plans for the future by a 43% to 34% margin. Just two months ago, in a poll taken days after the election, the public had a more positive view: 41% approved, 37% disapproved.

Changing views of the GOP’s policy agenda are most noticeable among moderate and liberal Republicans, who approved of party leaders’ plans by 78% to 3% in November. Today, 57% of moderate and liberal Republicans approve while 22% disapprove. Independents, too, have grown more dissatisfied with the GOP’s direction; shortly after the election, about as many independents approved (39%) as disapproved (35%) of the GOP’s plans and policies for the future. Today, 30% approve while 45% disapprove.

The public continues to say they want Obama and Republican leaders to work together, but there is considerable skepticism that this will occur. About six-in-ten (61%) say GOP leaders should try to work with Obama to accomplish things, even if it means disappointing some groups of Republican supporters. A similar percentage (65%) says Obama should do the same in working with Republicans.

But by roughly two-to-one (63% to 30%), most Americans think Republicans and Democrats will end up bickering and opposing one another more than usual this year. This is a far more pessimistic view than the public expressed two years ago. Shortly before Obama took offic 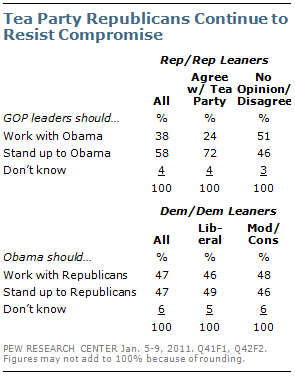 e in January 2009, just 39% predicted increased partisanship, while half (50%) thought Republicans and Democrats would work together more than usual over the course of that year.

On balance, most (58%) Republicans and Republican-leaning independents continue to say that their party’s leadership should “stand up to Obama” this year, but there is a sharp division of opinion within the party base. Republicans who agree with the Tea Party movement favor standing up to Obama by three-to-one (72% vs. 24% who want to work with Obama). Republicans who disagree or have no opinion about the Tea Party are divided: 51% say GOP leaders should try to work with Obama, while 46% say they should stand up to Obama. 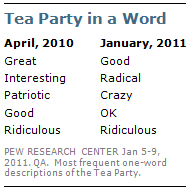 Asked to describe the Tea Party in a single word, respondents offer a range of descriptors. The most frequently used words are good, radical, crazy, OK and ridiculous. In April of last year, the top five words used were great, interesting, patriotic, good and ridiculous.

Next: Section 1: Views of Obama
← Prev Page
You are reading page1Page2Page3Page4
Next Page →