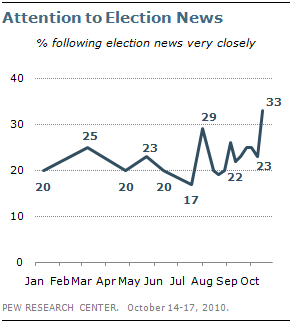 The dramatic rescue of 33 Chilean miners trapped underground for more than two months dominated the public’s news interest last week, while the media focused on both the miners’ saga and the midterm Congressional elections.

With the Nov. 2 elections fast approaching, the percent of the public tracking election news very closely jumped to 33% from 23% one week earlier. 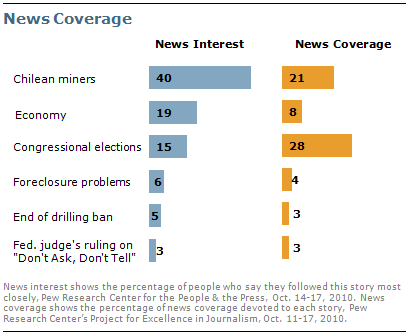 For its part, the media devoted 28% of coverage to the midterm elections and 21% of newshole to the drama that unfolded in Chile, according to a separate analysis by the Pew Research Center’s Project for Excellence in Journalism (PEJ). Roughly 12% of coverage focused on the still-struggling economy – about 8% on the economy in general and 4% on the foreclosure issues causing new problems for the housing market.

Women generally paid closer attention to the developments in Chile than men: 55% say they followed this news very closely, compared with 42% of men.

About two-in-ten of the public (19%) say they followed news about Obama administration plans to lift the ban on deep-water oil and gas exploration put in place after the BP disaster in the Gulf of Mexico. The story accounted for 3% of coverage; 5% say this was the news they followed most closely.

Two-in-ten (20%) say they very closely followed news about a federal judge’s decision to block enforcement of the government’s “Don’t Ask, Don’t Tell” policy concerning gays in the military. This news accounted for 3% of coverage and 3% say this was the news they followed most closely.

These findings are based on the most recent installment of the weekly News Interest Index, an ongoing project of the Pew Research Center for the People & the Press. The index, building on the Center’s longstanding research into public attentiveness to major news stories, examines news interest as it relates to the news media’s coverage. The weekly survey is conducted in conjunction with The Project for Excellence in Journalism’s News Coverage Index, which monitors the news reported by major newspaper, television, radio and online news outlets on an ongoing basis. In the most recent week, data relating to news coverage were collected October 11-17, and survey data measuring public interest in the top news stories of the week were collected October 14-17, from a nationally representative sample of 1,002 adults.

Results for this survey are based on telephone interviews conducted under the direction of Princeton Survey Research Associates International among a national sample of 1,002 adults living in the continental United States, 18 years of age or older, from October 14-17, 2010 (671 respondents were interviewed on a landline telephone, and 331 were interviewed on a cell phone, including 157 who had no landline telephone). Both the landline and cell phone samples were provided by Survey Sampling International. Interviews were conducted in English.