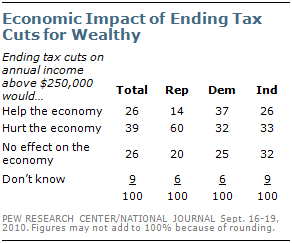 Nearly four-in-ten Americans (39%) say that allowing Bush-era tax cuts for the wealthy to expire at the end of this year would hurt the economy, while about a quarter each say this would help the economy (26%) or have no effect (26%).

The latest Pew Research/National Journal Congressional Connection poll, sponsored by SHRM, conducted September 16-19 among 1,005 adults, finds that Republicans are much more likely than Democrats or independents to say that ending the tax breaks for annual income above $250,000 would hurt the economy. Six-in-ten Republicans (60%) say this, compared with 32% of Democrats and 33% of independents.

For more public opinion about the tax cuts, see What To Do About the Bush Tax Cuts.

In February 2008, during the final year of George W. Bush’s second term as president, Democrats had a large advantage on the economy. At that point, 53% chose Democrats on this question, while 34% chose Republicans. Two years later, the parties were largely even: 41% chose the Democrats in February 2010 and 38% chose the Republicans. There has been little change in opinions since then.

On immigration, Republicans have held a slight edge since May. Prior to that, pluralities either favored Democrats on this or the two parties were essentially even. Among independents, 38% currently say Republicans can do a better job on immigration, while 26% say Democrats can.

The public also is divided over which party would better handle reforms of the Medicare system: 38% say Democrats and 33% say Republicans.

AMERICANS EVEN DISAGREE ABOUT COMPROMISING 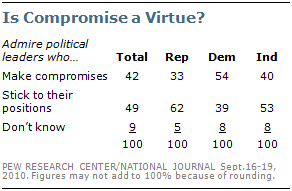 The latest Pew Research/National Journal Congressional Connection poll, sponsored by SHRM, conducted September 16-19 among 1,005 adults, finds that Republicans, in particular, admire politicians who stick to their positions (62%) over those who compromise (33%). Although independents are more divided on the question, a majority (53%) says they favor leaders who do not compromise; four-in-ten independents (40%) say they most admire leaders who compromise. The balance of opinion is reversed among Democrats; 54% of Democrats say they prefer politicians who compromise with those they disagree with, while 39% say they prefer politicians who stick to their positions without compromising.

Many Republicans Identify with Tea Party 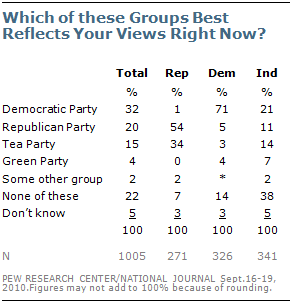 About a third of Americans say the Democratic Party (32%) best reflects their views right now; 20% say the Republican Party does, while one-in-seven (15%) say the Tea Party does. Just4% say the Green Party and 2% mention another group; fully 22% say that none of these represent their views. There has been little change in responses to this question from when it was asked in April. 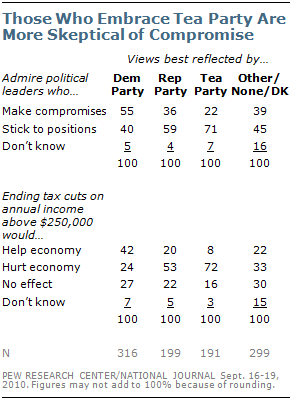 And those who identify with the Tea Party also are far more likely to say that allowing the George W. Bush tax cuts for income above $250,000 to expire at the end of this year would hurt the economy; 72% say this, compared to 53% of those who identify more with the Republican Party.