The disclosure of more than 75,000 classified documents about the war in Afghanistan by the website WikiLeaks garnered significant media coverage last week, and those familiar with the story were split over the effect of the leak: about equal percentages say the release harms the public interest as say it serves the public interest.

The latest News Interest Index survey, conducted July 29-August 1 among 1,003 adults by the Pew Research Center for the People & the Press, finds that while news about the Gulf oil leak continues to top public interest, attention to news from Afghanistan spiked following the WikiLeaks report, with 34% following Afghanistan reports very closely, up from 22% the previous week. This is the highest interest in Afghanistan 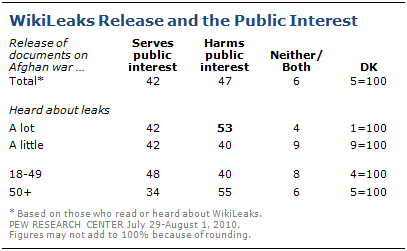 news since December 2009, in the weeks following Barack Obama’s decision to increase troop deployments there.

Age is also a factor in views of the classified document leak with younger Americans taking a less critical view of the disclosure made on the WikiLeaks website. On balance, those under age 50 think the leak serves the public interest (48% serve, 40% harm). By contrast, those over 50 say the leak harms the public interest by a 55%-40% margin.

Too Little WikiLeaks, Too Much Chelsea

The WikiLeaks disclosure of classified documents about the war in Afghanistan was seen as receiving too little coverage by a 41% plurality of the public. About a third (32%) say the press devoted the right amount of coverage to the story and relatively few (15%) say there has been too much coverage of the story. 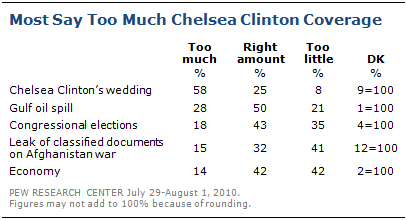 Men (63% too much) were somewhat more likely than women (54% too much) to say the wedding was overcovered by the press.

Half say the oil leak in the Gulf of Mexico received the right amount of coverage. Among those saying the amount of coverage was disproportionate, somewhat more described it as too much (28%) rather than too little (21%).

Equal percentages describe coverage of the economy as too little and the right amount (42% each); 14% say there has been too much coverage of economic news.

As it has been for most of the summer, the oil spill in the Gulf of Mexico remains the public’s top news story. Nearly six-in-ten (57%) say they followed news about the oil leak very closely and 39% say it was the one story they followed more closely than any other. News coverage of the story accounted for 12% of the newshole, according to a separate analysis by the Pew Research Center’s Project for Excellence in Journalism. While the public had a clear top story of the week in the Gulf oil leak, the media divided its attention between several leading stories, including: Afghanistan and WikiLeaks, immigration, the oil spill and the economy. 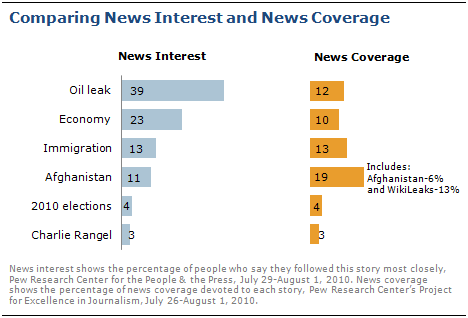 About half (51%) say they followed reports about the condition of the U.S. economy very closely, 23% call this their top story of the week. Coverage accounted for 10% of the newshole, according to PEJ.

Four-in-ten say they paid very close attention to a court ruling that stops most of Arizona’s immigration law from going into effect; 13% say they followed the story more closely than any other. While interest was moderate, the immigration debate was a big story for the media; coverage filled 13% of the newshole.

Very close interest in the situation and events in Afghanistan jumped to 34% last week – up from 22% a week prior – though public interest in the war continues to lag behind other leading stories and only about one-in-ten (11%) say it was the one story they followed most closely. Coverage of the war, not including the WikiLeaks story, accounted for 6% of the newshole; WikiLeaks as a separate storyline accounted for an additional 13% of coverage.

Interest in this year’s congressional elections was modest with about three-in-ten (29%) following election news very closely and just 4% naming it their top story of the week. The media devoted 4% of its overall coverage to the midterms.

Even fewer followed news about ethics charges against Congressman Charlie Rangel: 21% say they followed this story very closely, 3% named it as their top story of the week. The media devoted 3% of its coverage to the Congressional scandal.

Most Heard about Obama’s Appearance on the View

Three-quarters of the public say they have heard a lot (35%) or a little (40%) about Obama’s appearance on ABC’s morning show, The View. There are few differences by sex or partisanship, with all groups about equally likely to have heard about the appearance.

The WikiLeaks disclosure and Chelsea Clinton’s wedding registered similar amounts of public awareness. For both stories, roughly three-quarters say they heard at least a little about them, while about a quarter say they heard nothing at all.

These findings are based on the most recent installment of the weekly News Interest Index, an ongoing project of the Pew Research Center for the People & the Press. The index, building on the Center’s longstanding research into public attentiveness to major news stories, examines news interest as it relates to the news media’s coverage. The weekly survey is conducted in conjunction with The Project for Excellence in Journalism’s News Coverage Index, which monitors the news reported by major newspaper, television, radio and online news outlets on an ongoing basis. In the most recent week, data relating to news coverage were collected July 26-August 1, and survey data measuring public interest in the top news stories of the week were collected July 29-August 1, from a nationally representative sample of 1,003 adults.

Results for this survey are based on telephone interviews conducted under the direction of Princeton Survey Research Associates International among a national sample of 1,003 adults living in the continental United States, 18 years of age or older, from July 29-August 1, 2010 (673 respondents were interviewed on a landline telephone, and 330 were interviewed on a cell phone, including 75 who had no landline telephone). Both the landline and cell phone samples were provided by Survey Sampling International. Interviews were conducted in English.

Summary of FindingsToo Little WikiLeaks, Too Much ChelseaThe Week’s NewsMost Heard about Obama’s Appearance on the ViewAbout the News Interest Index