When voter files first came to prominence for practitioners and researchers, many were just what the name suggests – lists of registered voters. However, as research and targeting using the voter files has become more widespread, most vendors try to provide coverage of all U.S. adults, including those not registered to vote, in their files. Because the core component of the files is a combination of official state lists of registered voters, vendors have sought out commercial databases – available from sources such as credit rating agencies – to locate Americans missing from state voter rolls.

How well the files cover the unregistered population is potentially an important consideration for those who wish to use the files to locate and attempt to persuade the unregistered to register. Coverage of the unregistered is also important if the file is to be used for describing or conducting surveys of the general public and not just voters. To date, pollsters have used the files as a source for sampling the registered voter population, but files that make an effort to cover the full population could theoretically have utility as sampling sources for the general public. To the extent that they accurately represent the non-registered population, such files provide the researcher with the opportunity to use information in the files to guide the sampling. For example, the non-registered and registered voters with lower turnout propensities could be oversampled for research aimed at understanding the less engaged.

To assess how well the files cover the unregistered, the match rates and composition of the matched cases was compared for panelists who report being registered to vote and for those who say they are not registered or are not sure if they are registered. In Pew Research Center surveys, respondents are considered unregistered if they report not being registered or express uncertainty about their registration. Among members of the American Trends Panel, those considered unregistered are much less likely to have been matched by the files. As noted in the previous chapter on the matching process, the match rates for the self-reported unregistered varied from a low of 12% to a high of 54%, depending on the vendor. Not surprisingly, panelists who were certain about their lack of registration had the lowest rates, ranging from 4% to 50% matched, with those who said they were probably registered but not certain falling between the certainly registered and the certainly unregistered. 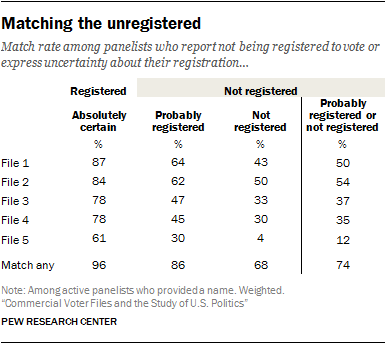 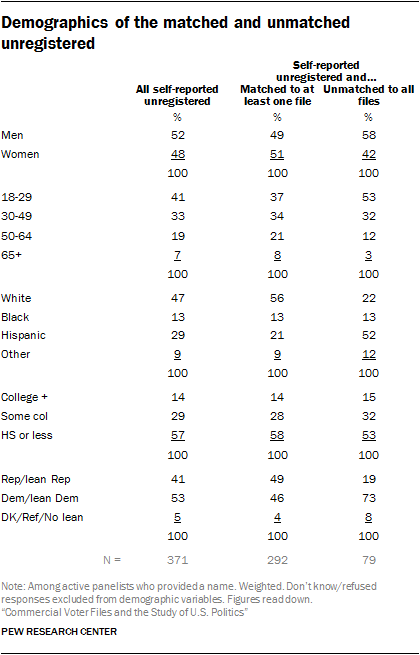 Collectively, these results show that, especially within a group known to be harder to match (the unregistered), there are demographic biases in the unmatched. These biases largely echo what we see in matching among the general public.

Complete Report PDF Q&A: The growing use of u2018voter filesu2019 in studying the U.S. electorate