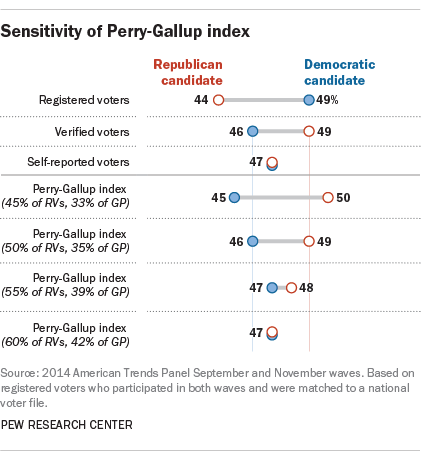 Given that estimates for the 2014 general election put the national turnout at 35.9% of the voting eligible population, it would seem that this is the correct cutoff to use. But it is clear that the survey sample used here – registered voters who completed two waves of interviews and were matched to the voter file – overrepresented likely voters, since 63% of them (not 50%) are verified as having voted. As a result, a 60% turnout cutoff for registered voters (42% of the general population) was used for analysis.

Most survey samples are likely to have a similar bias, if not to the same extent. The problem is that it is difficult to know how much a given sample overrepresents likely voters. For this sample in this election, the Perry-Gallup method produces a forecast that is too Democratic when the appropriate cutoff is employed.

Can Likely Voter Models Be Improved? 1. Polls and votes: The 2014 elections by the numbers 2: Measuring the likelihood to vote 3. Comparing the results of different likely voter models 4. Conclusion Acknowledgements Methodology Appendix A: The Perry-Gallup measures Appendix B: The choice of a turnout measure
Appendix C: Sensitivity to the turnout forecast