Pew Research Center has analyzed news coverage of the beginning of each of the five presidential administrations since President Bill Clinton in 1993. During that time, the news media environment has changed dramatically, from expanded cable offerings to a plethora of digital news sites. At the beginning of the Obama administration in 2009, researchers began to examine a cross-section of the national news media environment as it existed in 1993 while also separately studying a more expansive mix of news outlets based on the news media landscape at that time. We carried this dual-pronged analysis through to the 2017 and now the 2021 study. In this long-term trend, we are able to compare topic, frame and overall assessment of each president and his administration using the seven sampled media organizations that have persisted since 1993 – the nightly evening news on ABC, CBS, NBC and PBS, as well as the print editions of The New York Times, The Washington Post and Newsweek – across the first 60 days of each presidency (see Methodology).

Since the smaller long-term 2021 sample has fewer sources than the main 2021 sample, figures differ in some places. One particular area of difference lies in the assessment of the Biden administration. While the main sample has a more negative than positive overall assessment of the Biden administration (32% vs. 23% of stories; see Chapter 1 for more), the smaller sample for long-term comparison has a more positive than negative assessment (27% vs. 19%). Still, in both samples, the largest share of stories were neither positive nor negative. The five most common topics and framing approaches are much more on par. 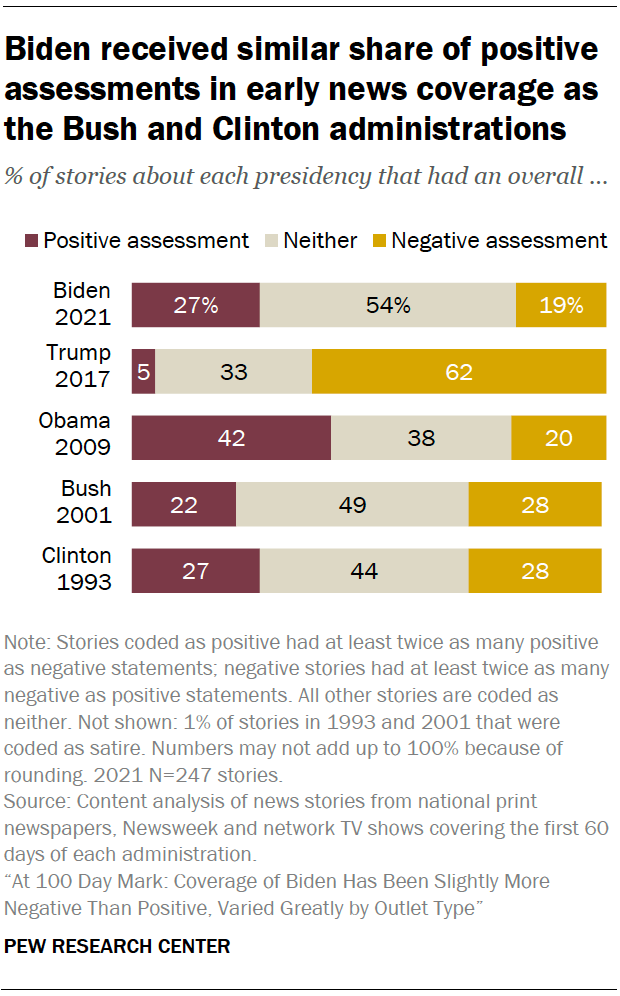 Compared with the coverage among these seven outlets in the first 60 days of the Trump, Obama, Bush and Clinton presidencies, assessments of Biden’s start in office were the most likely to be neither positive nor negative, with the positive slightly outweighing negative.

About a quarter of stories in this smaller sample (27%) offered positive assessments of the Biden administration, versus about two-in-ten (19%) that offered negative assessments. But the largest share (54%) were neither positive nor negative.

As in the main sample, this stands in contrast to the far more negative than positive mix of assessments in the news stories about Trump’s first 60 days in office (62% negative vs. 5% positive).

Biden’s positive coverage sits at similar levels as Clinton and Bush (27% and 22%, respectively). The early days of these two presidencies had higher shares that were negative (28% for both) than for Biden. Early coverage of the Obama administration still stands apart as having far more stories that were positive (42%) than any of the other four. 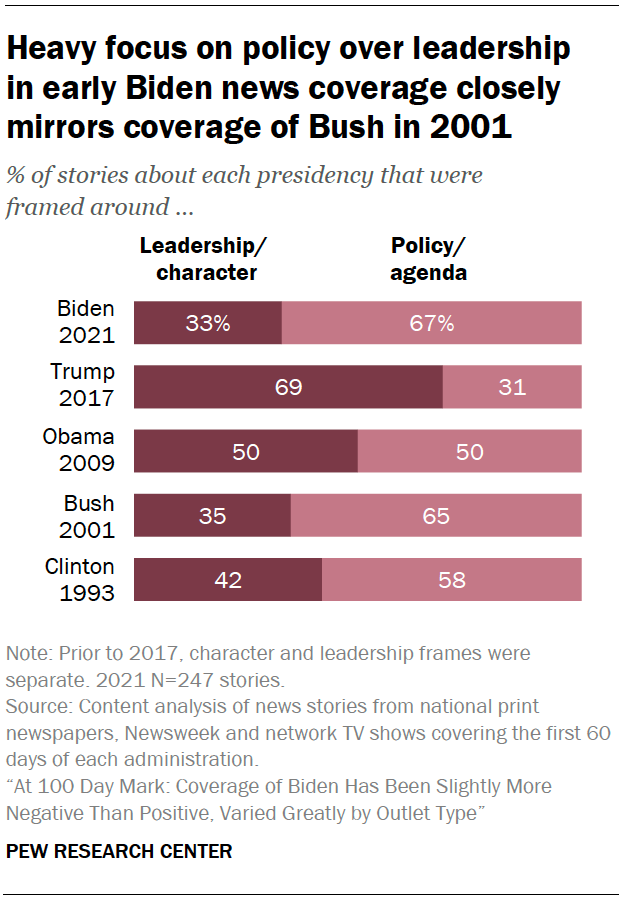 With the start of the Biden administration, a major shift back toward the Clinton and Bush presidencies came in the way journalists framed the coverage of the day’s events with far more focus on policy and agenda than on leadership and character.

Two-thirds of stories in the smaller 2021 sample (67%) were framed around policy and agenda, while 33% were framed around leadership and character. This is nearly identical to the 65%-35% split during Bush’s first 60 days and similar to the 58%-42% split of Clinton’s early days.

Majority of stories in early 2021 were about domestic issues, more so than in the past 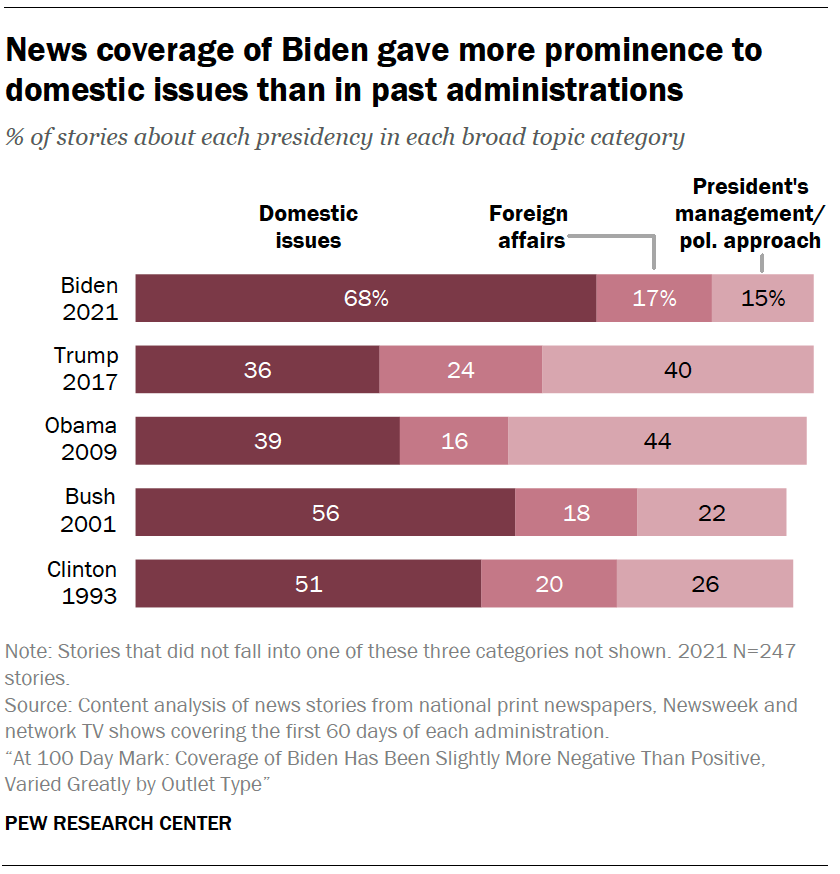 Stories about each president were classified by subject matter into three broad topic categories (in 2021, 47 specific topics were studied): domestic issues, foreign affairs, and the president’s management and political approach.

In the early days of 2021, domestic issues dominated, as the coronavirus pandemic pervaded much of the news coverage. Fully 68% of stories in this smaller, long-term sample were oriented around domestic issues, versus 17% around foreign affairs and 15% around personal issues of management and politics.

This is far less focus on the personal and political than during early coverage of either Trump or Obama (40% and 44%, respectively) and more in line with the level President Bush saw in 2001 (22%). One thing that remained consistent across all five administrations is having foreign affairs account for a small share of the total coverage – never above 24%.

As discussed in Chapter 1, one major component of early coverage of the Biden administration was the pervasive presence of the pandemic. While COVID-19 was not coded for in the smaller comparative sample, its impact is seen in the specific topic areas getting the most attention. Health care received higher levels of attention during Biden’s first 60 days than in early coverage of the four past presidencies: 18% of stories were about health care, roughly on par with the 22% about the economy.

Next: 4. Most Americans have been following news about the Biden administration closely
← Prev Page
Page3You are reading page4Page5Page6Page7Page8Page9Page10Page11Page12Page13
Next Page →

At 100 Day Mark: Coverage of Biden Has Been Slightly More Negative Than Positive, Varied Greatly by Outlet Type 1. News coverage of Biden’s early days in office varied across outlet groups, with more focus on policy agenda than leadership, character 2. News outlets with right-leaning audiences used fewer types of sources than those with left-leaning or mixed audiences
3. Comparing early news coverage of Biden with that of past administrations – among a smaller mix of outlets
Assessments of the Biden administration’s words or actions most likely to be neither positive nor negativeFocus on policy and agenda over leadership and character in early Biden coverage mirrors that of Bush in 2001Majority of stories in early 2021 were about domestic issues, more so than in the past
4. Most Americans have been following news about the Biden administration closely 5. Many Americans say early media assessments of Biden administration were mostly positive, fair and accurate 6. Americans differ by news diet on which Biden administration issues get too much coverage, which get too little 7. Americans more familiar with Biden administration’s proposed minimum wage increase than vaccination goals Methodology Appendix A: Grouping outlets by audience ideology and grouping survey respondents by media diet Appendix B: Detailed tables comparing news coverage of the first 100 days vs. 60 days of the Trump administration in 2017 Appendix C: Content analysis detailed tables Acknowledgments