On balance, many Americans sense that the early assessments of the Biden administration have been largely positive, and majorities say that the news coverage has been mostly accurate and fair.

But when it comes to specific issue areas the administration has focused on, whether people have seen mostly positive, negative or mixed evaluations in the news often varies sharply based on where they get their news, according to the survey conducted March 8-14, 2021. 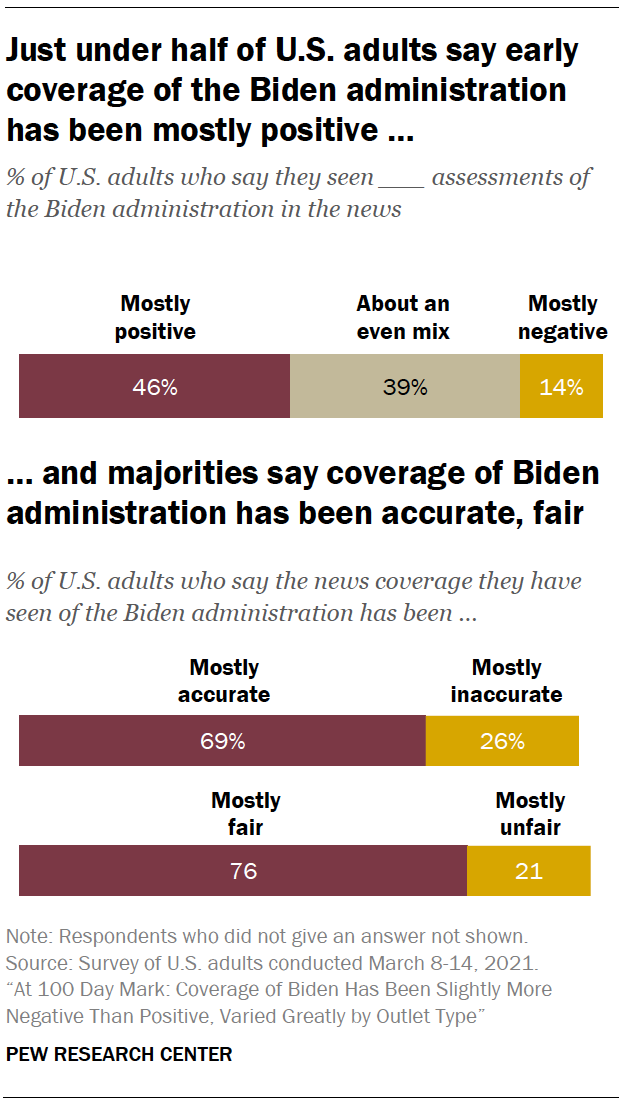 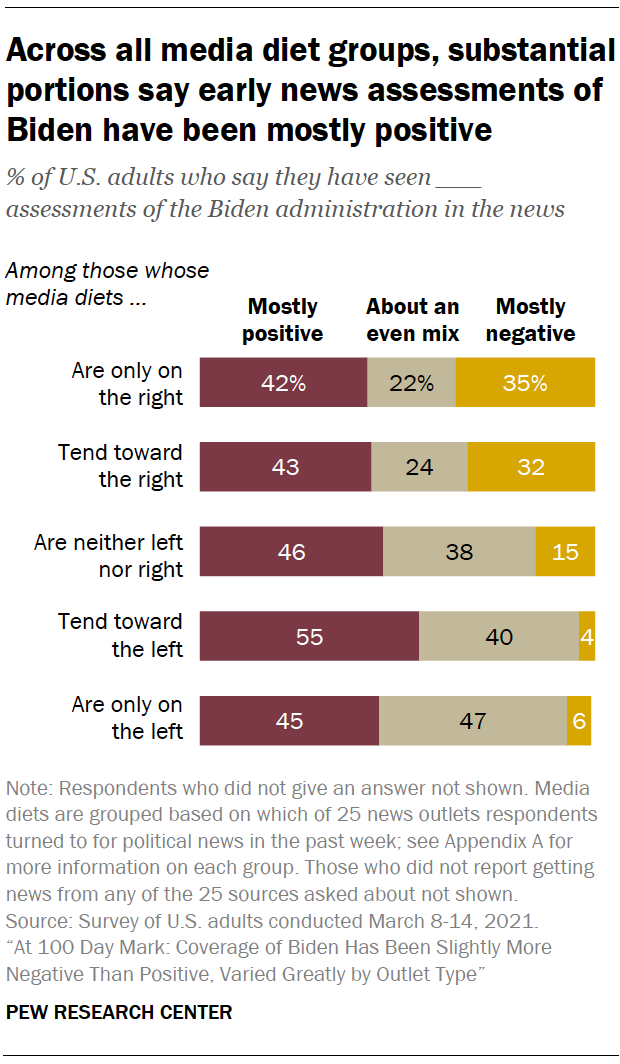 Those who turn only or mostly to outlets whose audiences lean right politically are much more likely to say they see negativity toward Biden in the news, though substantial portions of these groups also say that the coverage has been mostly positive.

More than half (55%) of those who tend toward the left in their news diet say assessments have been mostly positive, while another 40% say it has been an even mix. Americans who turn only to sources with left-leaning audiences are more evenly divided between those who say the news they’ve seen has been mostly positive (45%) and those who say the assessments have been a pretty even mix (47%). But very few in either of these groups say they have seen mostly negative evaluations of Biden (4% and 6%, respectively).

Meanwhile, about a third of U.S. adults who turn only to sources with right-leaning audiences (35%) say the news they’ve seen has mostly offered negative assessments of Biden. The same is true of those whose media diets tend toward the right (32% say coverage has been mostly negative).

Americans whose news diets are more in the middle or mixed fall somewhere in between the other groups when it comes to the share who say the coverage has been mostly negative (15%).

Americans’ sense of more positive rather than negative coverage stands in some contrast to the content analysis of coverage, which tilted more negative than positive. Still, the differences by media diet match the general pattern of coverage from outlets with right-leaning or left-leaning audiences: Those with a left-only diet are most likely to sense positive or evenly mixed coverage, and the group with a right-only diet have seen a greater degree of negative coverage. 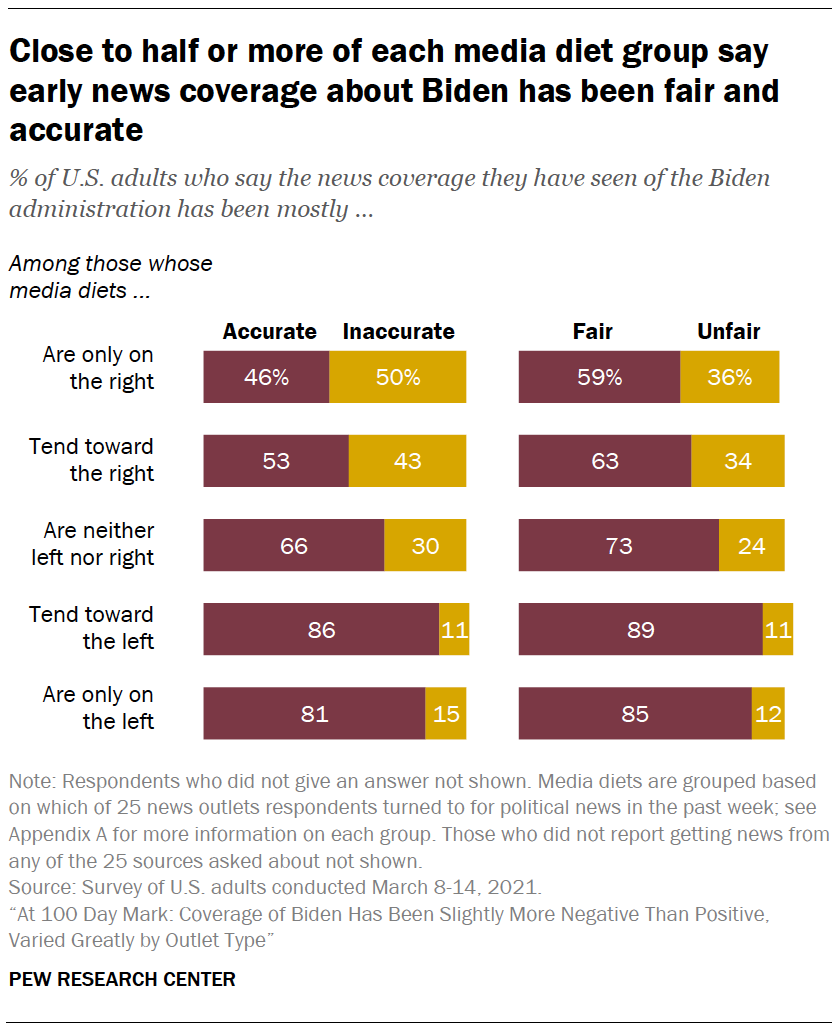 More than eight-in-ten Americans whose media diets include only outlets with left-leaning audiences or tend toward the left say the coverage they’ve seen has mostly been fair. That sentiment is shared by 59% of those whose media diets are only on the right and 63% whose diets tend toward the right. Roughly three-quarters of those with media diets in the middle (73%) say the coverage they’ve seen has been fair.

There is somewhat less consensus around the accuracy of coverage. Those who only get news from outlets with right-leaning audiences are the most likely to say they have seen inaccurate coverage (50%), while large majorities of those whose media diets tend toward the left say coverage has been accurate. 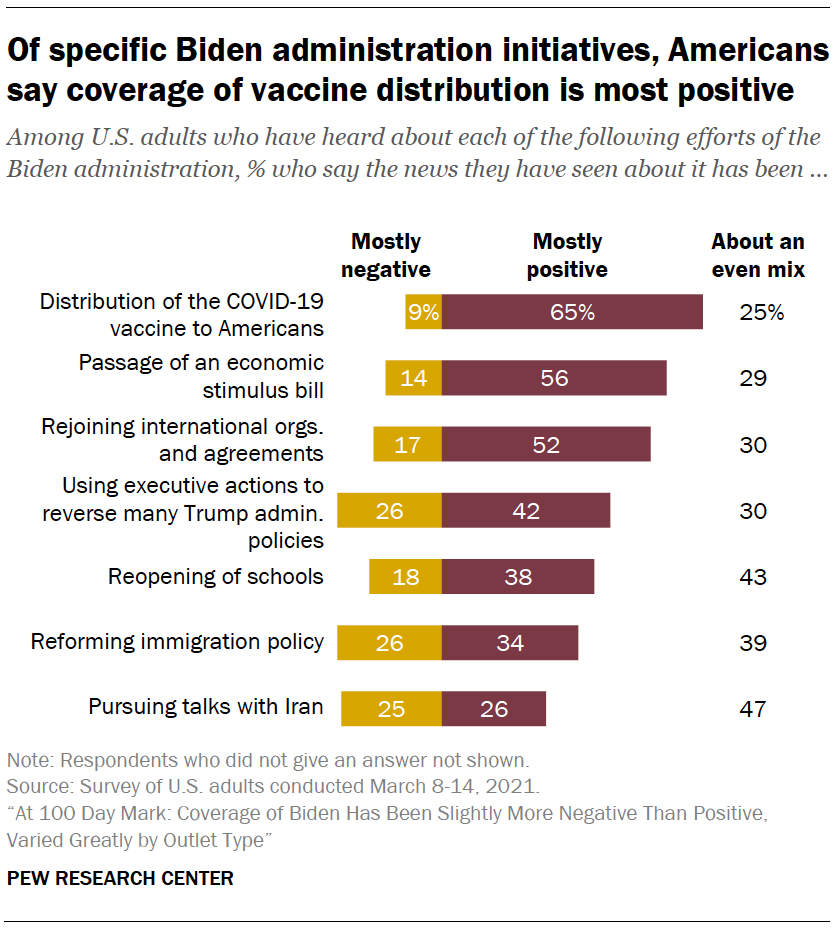 For three of seven specific Biden administration policy priorities asked about, at least half of respondents who had heard about them said the coverage they saw was mostly positive: distribution of the COVID-19 vaccine, the passage of the economic stimulus bill and rejoining international organizations and agreements.

Those who consume media exclusively from outlets with left-leaning audiences are far more likely than the right-only group to see the coverage of these topics as positive. For example, 57% of the left-only group say that the coverage they’ve seen of the Biden administration using executive actions to reverse policies of the Trump administration has been mostly positive, versus just 17% of the right-only group who say the same.

Americans’ view that vaccine distribution received the most positive coverage is in line with the content analysis findings, which show that health care was the only topic (of the five most common topics) to have more stories that had a positive assessment of the Biden administration than a negative one. For the other common topics – just like assessment of news coverage of the administration overall – Americans’ assessment of the coverage as more positive than negative stands in contrast to the content studied. For the other four most common topics – economy, immigration, political skills and nominations/hires – there was either about an equal portion of negative and positive stories or were more negative than positive stories. 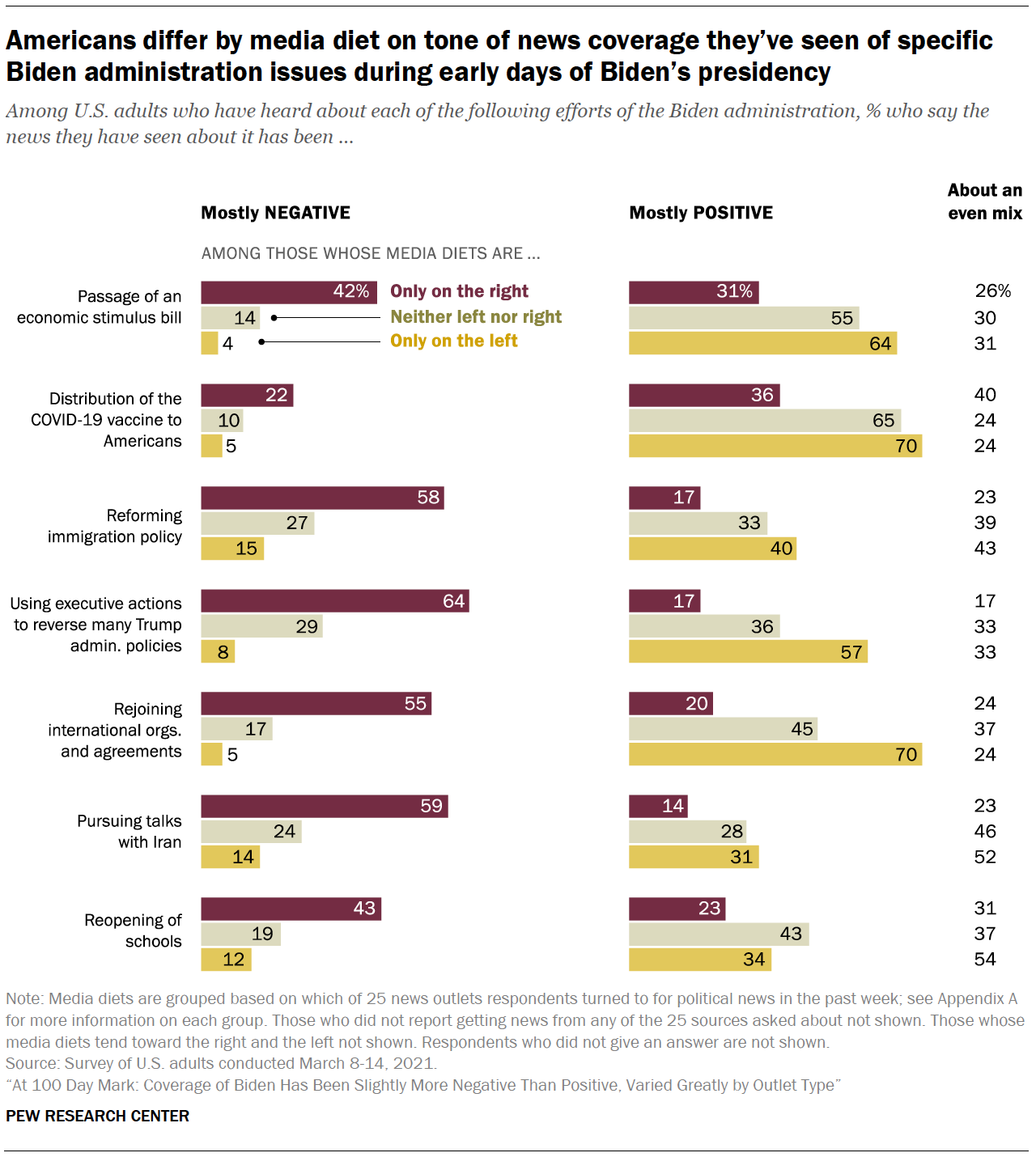 Most Americans say Biden’s relationship with the media is healthy

One major narrative throughout the Trump presidency was the tension between Donald Trump and the news media. Trump regularly criticized both the news media generally and individual outlets, referring often to “fake news” and calling news media outlets the “enemy of the people.” Americans were well aware of this tension. In a 2017 survey, a strong majority (83%) said that the relationship between Trump and the media was generally unhealthy. 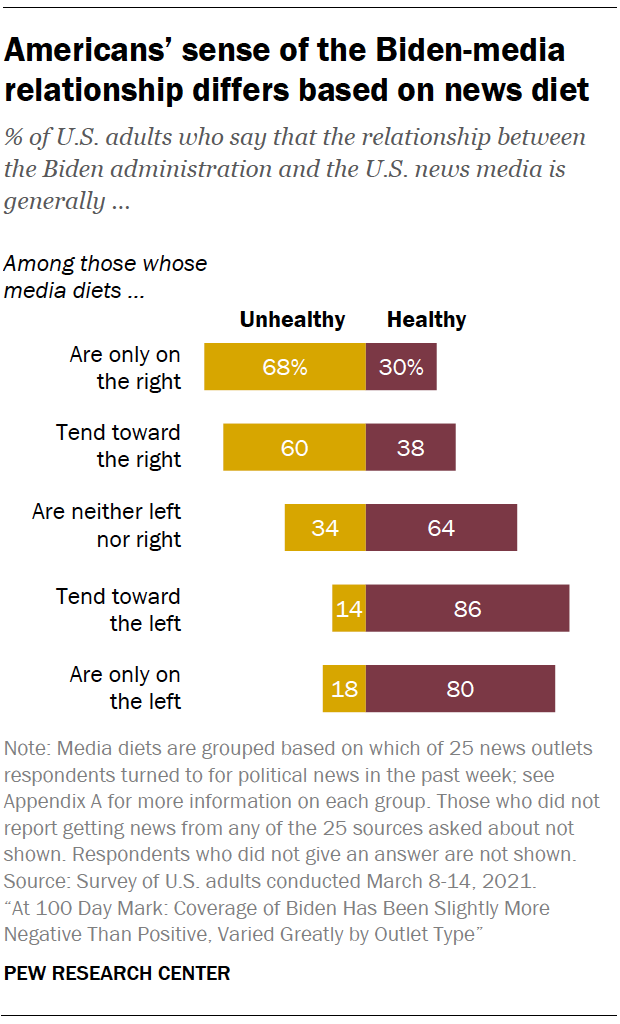 This sentiment is especially widespread among those whose news diets include outlets with left-leaning audiences. But those with media diets that tend toward or are exclusively on the right feel differently: Six-in-ten or more in those two groups say that relationship is generally unhealthy.

The 2017 survey found that large majorities of both Democrats and Republicans said the relationship between Trump and media was unhealthy (media diet groupings were not a part of the 2017 survey).

Next: 6. Americans differ by news diet on which Biden administration issues get too much coverage, which get too little
← Prev Page
Page3Page4Page5You are reading page6Page7Page8Page9Page10Page11Page12Page13
Next Page →