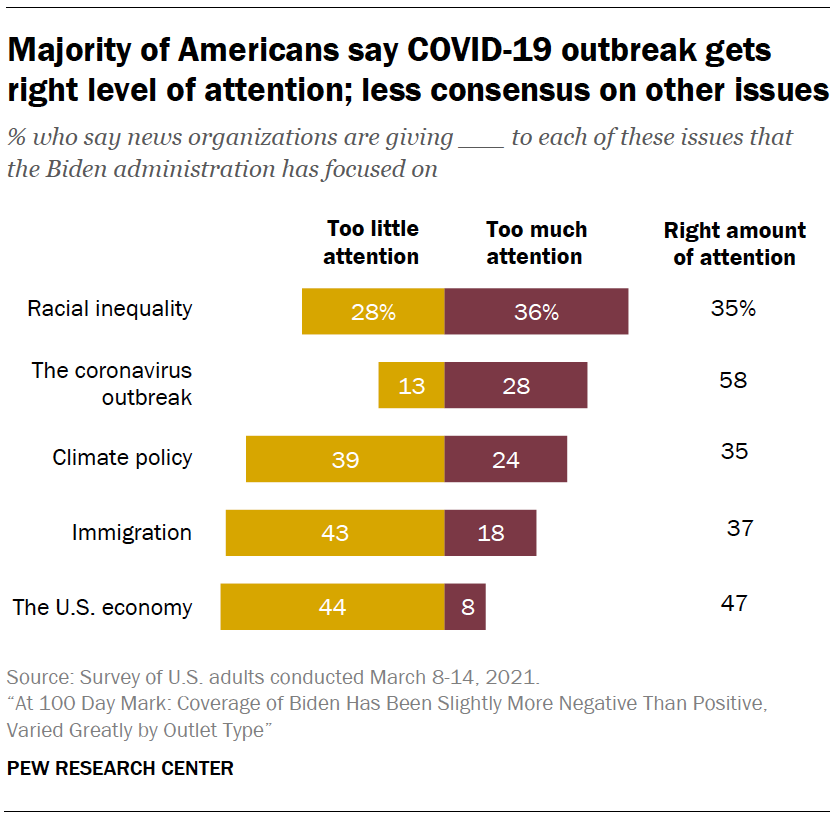 The survey asked respondents whether five different priorities of the Biden White House are getting too much attention, too little attention or the right amount of attention from the news media as a whole during the early days of the administration.

The COVID-19 pandemic is the only issue that a majority of Americans (58%) say is getting the right amount of coverage, although more people say the pandemic is getting too much attention (28%) than too little (13%).

These opinions differ sharply based on people’s media diets. Majorities of those who get political news only from outlets with right-leaning audiences say that racial inequality (75%), climate policy (64%) and the coronavirus outbreak (57%) are receiving too much attention, compared with no more than 13% who say this among news consumers on the left side of the media ecosystem.

Meanwhile, most of those with a right-only media diet say the U.S. economy (77%) and immigration (59%) are getting too little attention, compared with far fewer among those who get their news only from outlets with left-leaning audiences (23% and 37%, respectively).

The prevailing view among those with a left-only media diet is that the U.S. economy (68%), the coronavirus outbreak (75%) and immigration (50%) are getting about the right amount of coverage. A clear majority (57%) say climate policy gets too little attention, while people in the left-only group are evenly divided over whether racial inequality is getting too little attention (43%) or the right amount (42%). 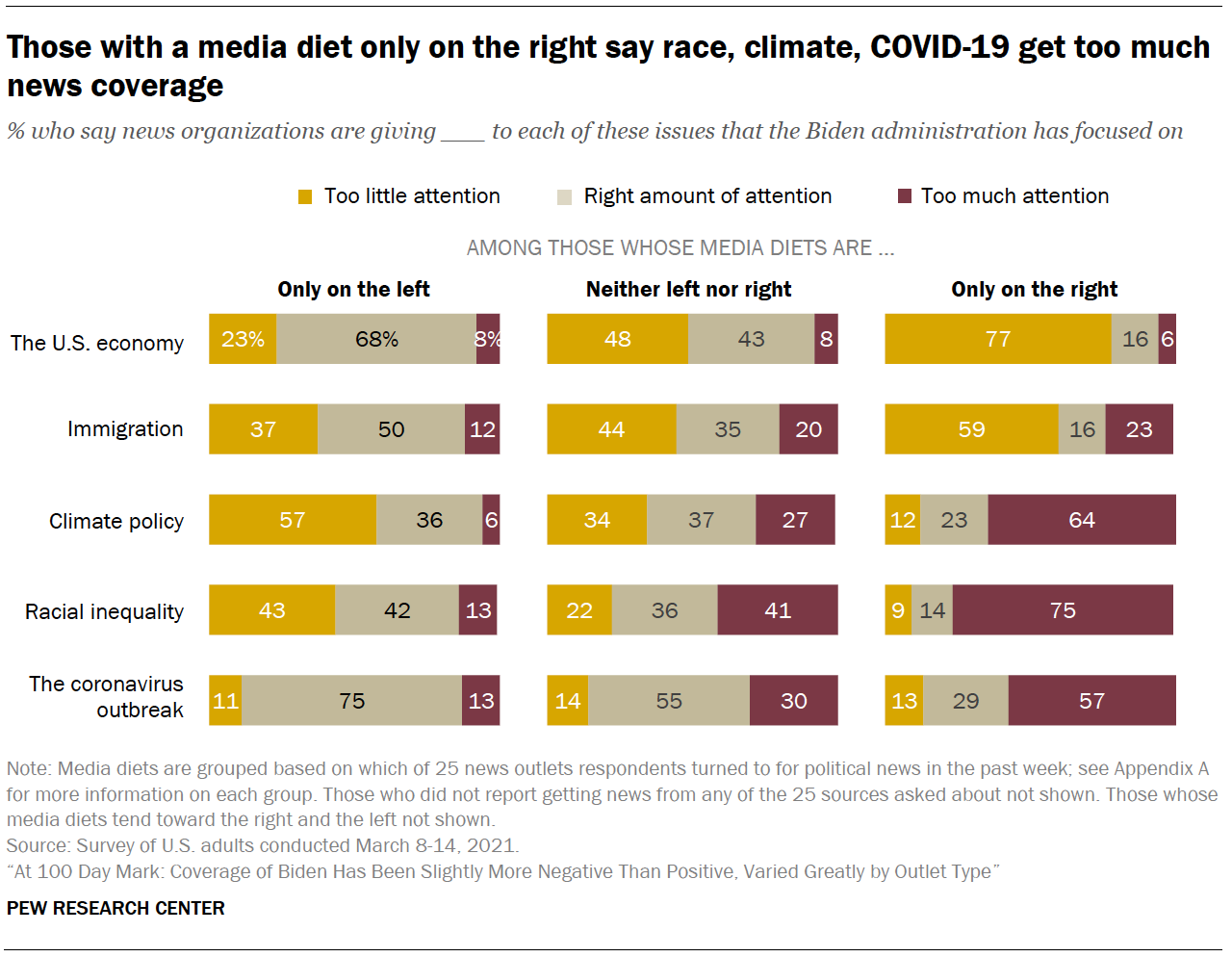 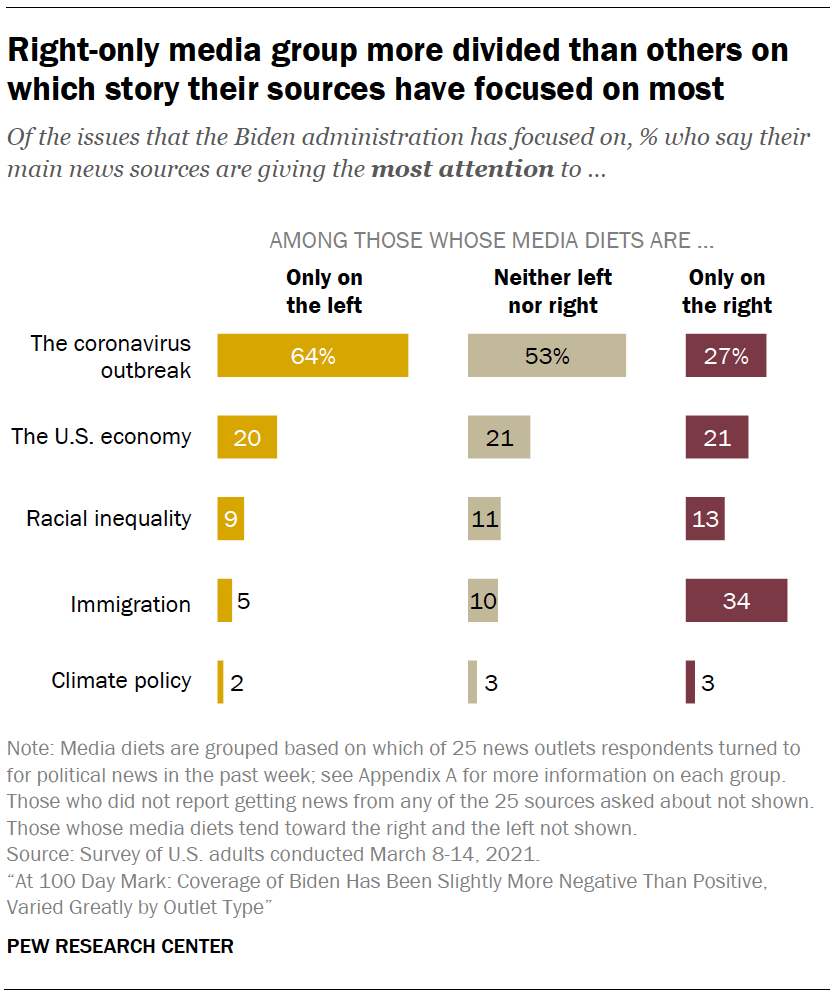 The survey also asked Americans which of these five issues is getting the most attention from their main news sources (rather than the news media overall).

There is no clear consensus among those who only get political news from outlets with right-leaning audiences. About a third in this group (34%) say their news sources are covering immigration the most out of the five issues, followed by 27% who choose the coronavirus outbreak and 21% who say they see the most coverage of the U.S. economy. Fewer say racial inequality (13%) or especially climate policy (3%) are getting the most attention.

Among those with media diets only on the left, nearly two-thirds (64%) say the coronavirus is the most covered of the five topics. People in this left-only group are much less likely than those whose news diets are only on the right to name immigration as the topic getting the most attention (5% vs. 34%). People on the left side of the media ecosystem are no more likely than those on the right to say racial inequality (9%) or climate policy (2%) are getting the most attention from their news sources.

Like those on the left, news consumers with media diets in the middle (neither on the left nor the right) are most likely to say the pandemic is getting the most attention from their main news sources (53%), with the economy next at 21%.

While the list of topics asked about here differs somewhat from those in the study of news coverage in Part 1, these assessments of what their main sources are giving the most attention for each media diet group align fairly closely with the share of coverage devoted to each. The coronavirus was very prevalent throughout coverage in the outlets with left-leaning and mixed audiences, with the economy as the top specific topic area. Among the outlets with right-leaning audiences, immigration was the most covered topic area.

The importance placed on sources

When asked about six possible factors in evaluating the trustworthiness of a story, Americans also rank the sources cited relatively highly. Half of Americans say which news organization publishes a story is very important in determining whether it is trustworthy, and 47% say the same about the sources cited. U.S. adults are far more likely to give high importance to these factors than they are to put a lot of stock in one’s gut instinct about a story (30%), the journalist who reported it (24%), the person who might have shared it with them (23%) or the response on social media (6%).

There is again a good deal of consistency across media diet groups, with a few exceptions. Those who turn only to news sources with right-leaning audiences are twice as likely as those with a left-only news diet to say they place great importance on their gut instinct (40% vs. 20%) and on the journalist reporting the story (36% vs. 18%) when deciding whether to trust a story.