Pew Research Center’s American News Pathways project conducted this study to understand how Americans are engaging with and perceiving news coverage of the demonstrations to protest the death of George Floyd, a black man killed in police custody in Minneapolis.

The killing of George Floyd while in custody of Minneapolis police and the protests that ensued across the country have dominated news coverage that had for the past few months been consumed with the coronavirus pandemic. 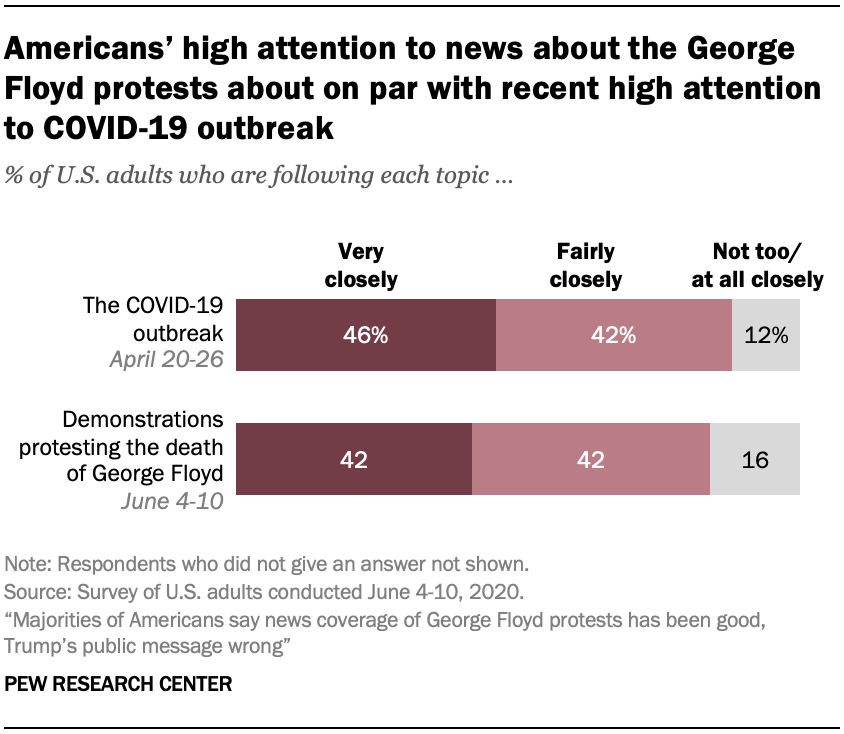 Americans have been following news of Floyd’s death and the demonstrations that followed nearly as closely as they had been keeping up with news related to COVID-19, and many are discussing it frequently with others, according to a new Pew Research Center survey of 9,654 U.S. adults on the American Trends Panel, conducted June 4-10, 2020, as part of the Center’s American News Pathways project. 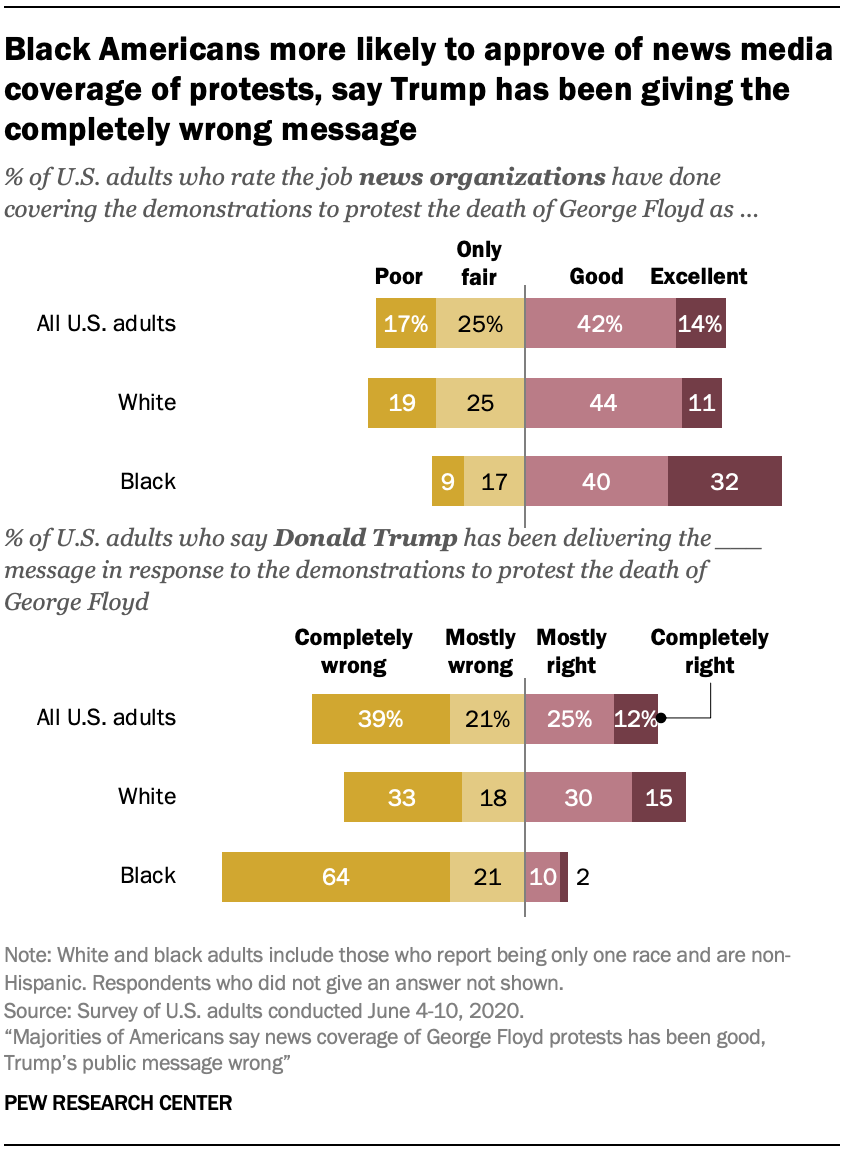 Amid this intense interest, the public has differing assessments of the news media’s coverage and the message being delivered by their president. Fully six-in-ten U.S. adults say Donald Trump’s message in response to the protests has been wrong, including about four-in-ten (39%) who say it has been “completely” wrong. Fewer (37%) say his message has struck the right tone, with just 12% saying Trump has delivered the “completely” right message.

When it comes to news coverage of the demonstrations, on the other hand, more Americans offer a positive assessment than a negative one. Most U.S. adults (57%) say news organizations have done a “good” or “excellent” job, compared with 42% who give the news media an “only fair” or “poor” assessment.

Differences in the evaluations of Trump and the news media are particularly dramatic when it comes to black Americans. A full 85% say the message Trump has been putting out is mostly (21%) or completely wrong (64%), while only 13% say it is right. Conversely, about seven-in-ten black adults (72%) say the media have done a good or excellent job covering the demonstrations in the wake of George Floyd’s killing.

White Americans are more closely divided, though still give a more negative (52%) than positive (45%) assessment of Trump’s message, and a more positive (55%) than negative (44%) rating of media coverage of the protests. 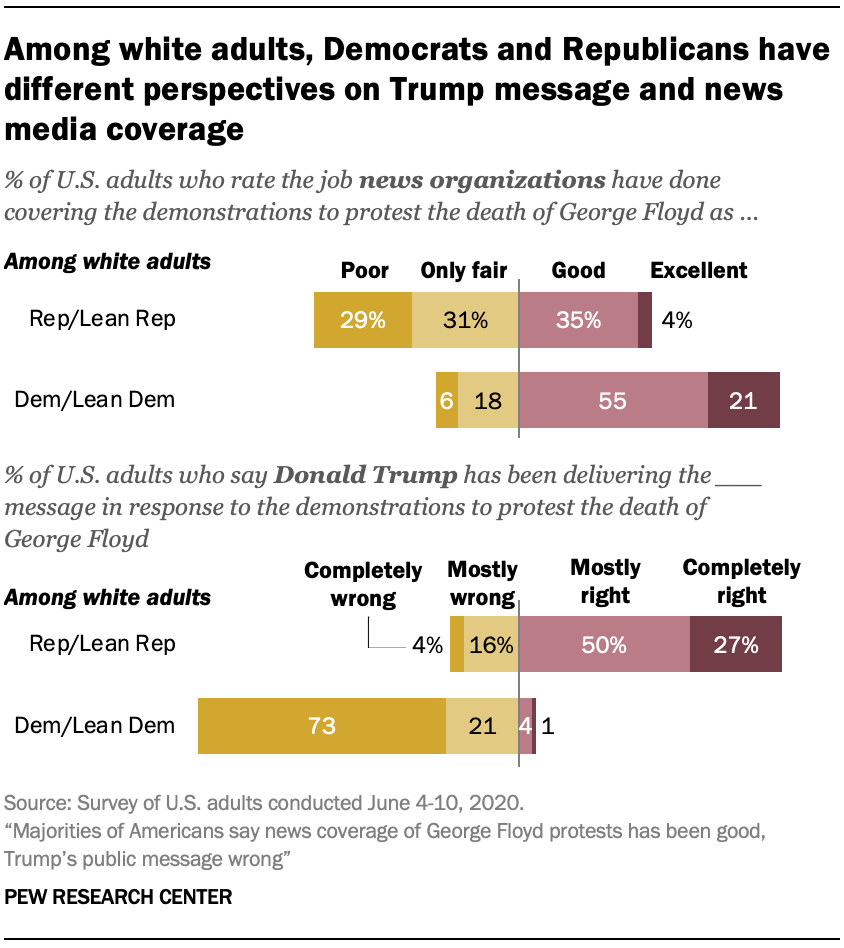 Much of what divides white adults in this case is political.1 White Americans who are Democrats or lean Democratic and those who are Republicans or lean Republican express very different views on both Trump’s messaging and media coverage around the protests. A total of 76% of white Republicans say Trump’s message has been mostly or completely right, in contrast with almost unanimous agreement among white Democrats (94%) that it has been wrong (including almost three-quarters who say Trump’s stance has been completely wrong). And while 60% of white Republicans say the news media have been covering the protests only fairly or poorly, 76% of white Democrats say journalists have been doing a good or excellent job.

There are similar patterns by party affiliation overall – beyond differences among white adults. Democrats and those who lean Democratic, regardless of race or ethnicity, are more likely than Republicans and Republican leaners to be very closely following coverage of the demonstrations, and partisans have starkly different assessments of the media coverage and Trump’s message than Republicans.

On balance, Americans say too much news coverage has focused on acts of violence during protests, too little on nonviolent protests

In addition to news media coverage overall, the study asked the public’s thoughts about the amount of coverage news organizations have devoted to six specific storylines related to the demonstrations. Acts of violence and destruction that have occurred around the protests is the only storyline of the six that a plurality of Americans say is receiving too much news coverage. More than four-in-ten U.S. adults (44%) say this element of the story is getting too much attention, compared with about half as many (20%) who say coverage is too light and 36% who say the level of coverage has been about right.

Conversely, about half of U.S. adults (51%) say nonviolent protests are getting too little coverage, with another 36% saying they are getting the right amount of coverage and far fewer (12%) who say there has been too much coverage of nonviolent demonstrations.

Roughly half of Americans say the level of coverage has been appropriate on three topics: the decision of whether to prosecute the officers involved in George Floyd’s death (53%), the death of Floyd himself (47%) and the actions taken by the police and National Guard in response to the protests (46%). In each case, more Americans say these stories have been getting too little coverage rather than too much. 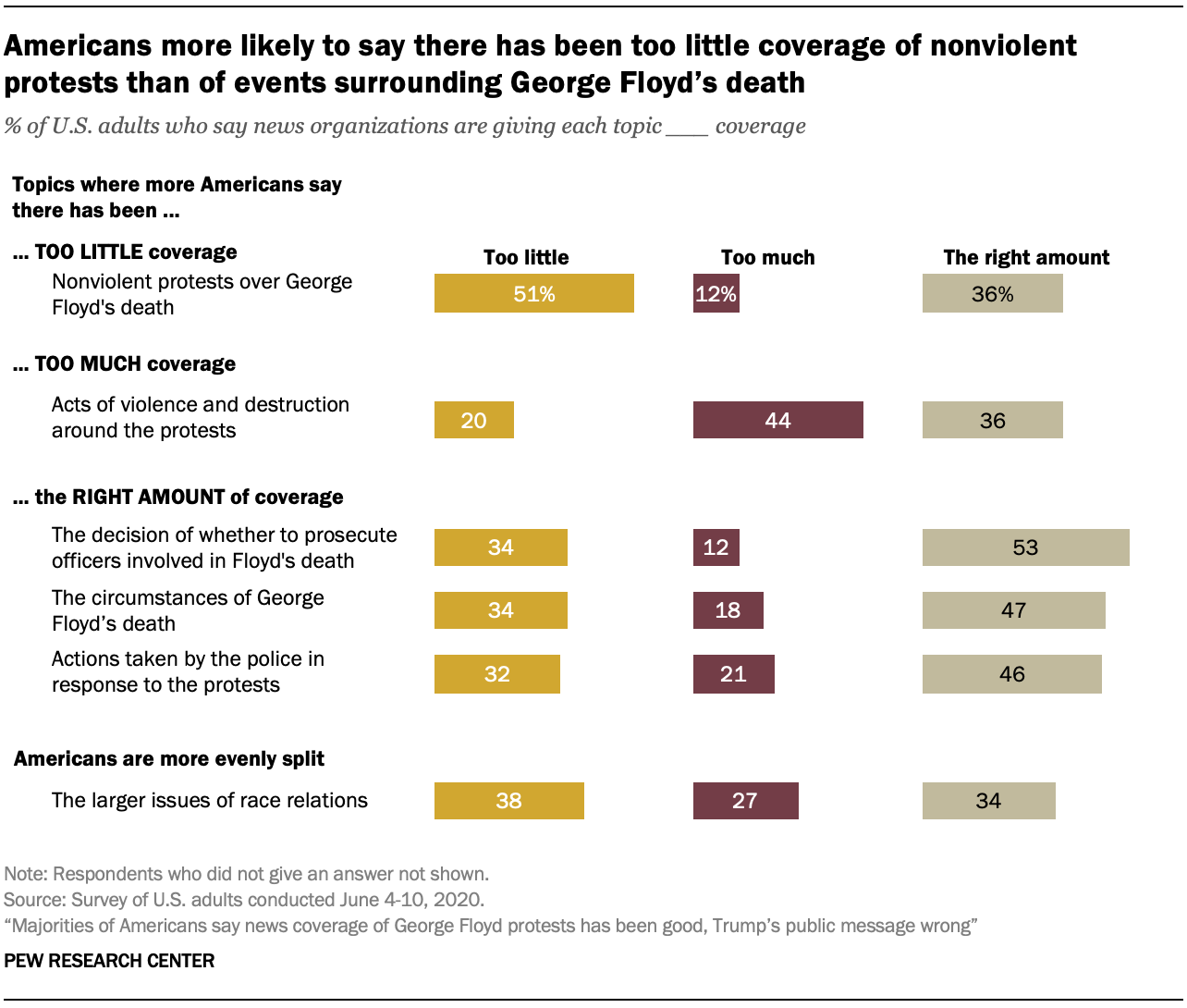 Black and white adults offer varying perspectives on the amount of coverage the news media are giving to some of the storylines. For example, about half of black adults (51%) say there has been too little coverage of the decisions around whether to prosecute Minneapolis police officers for Floyd’s killing, while just 28% of white Americans agree. 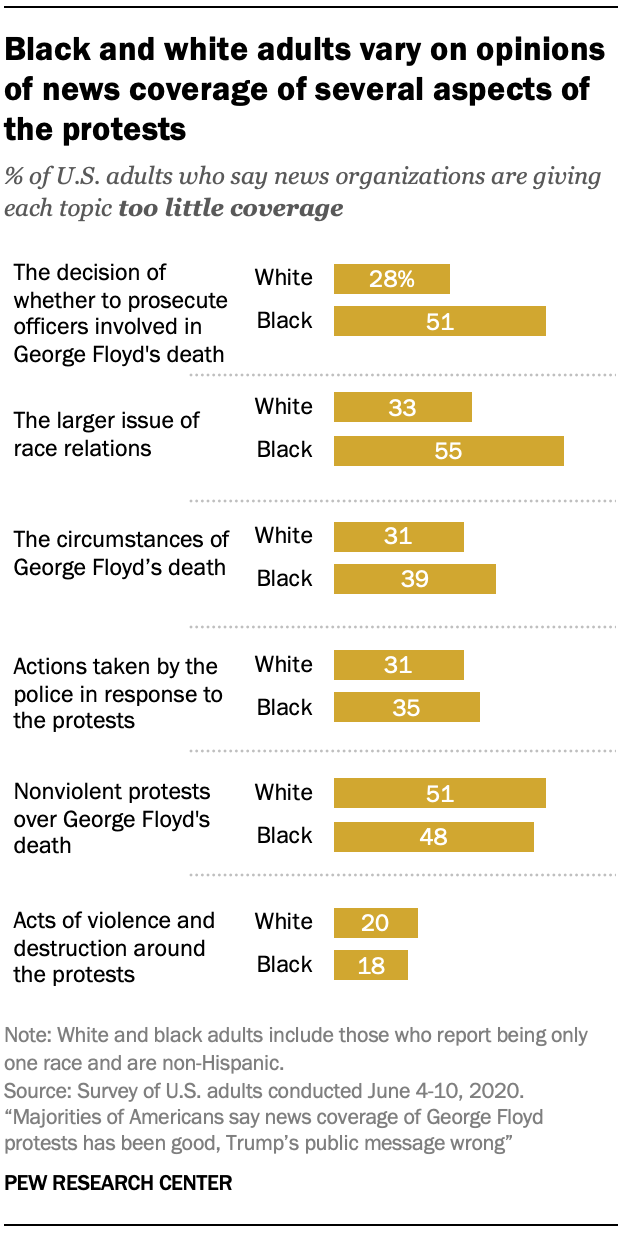 A similar gap exists on the larger issue of race relations – 55% of black Americans say that subject has not been receiving enough attention, compared with 33% of white Americans who say the same. Among white adults, there are large differences between Democrats and Republicans on this question. About half of white Democrats (51%) and just 19% of white Republicans say that broader subject of race relations has not gotten enough coverage; meanwhile, 50% of white Republicans say it has gotten too much attention, compared with only 9% of white Democrats.

Young adults stand out for discussing the protests more than older adults, being particularly negative on Trump’s message and wanting more coverage of most issues

In evaluating responses to the events surrounding George Floyd’s death by age, one group clearly stands out — America’s youngest adults. They give Trump’s public response the most negative assessment of any age group, with 76% saying he is delivering a mostly or completely wrong message on the demonstrations. That contrasts with the 49% of Americans 65 and older who offer the same evaluation. 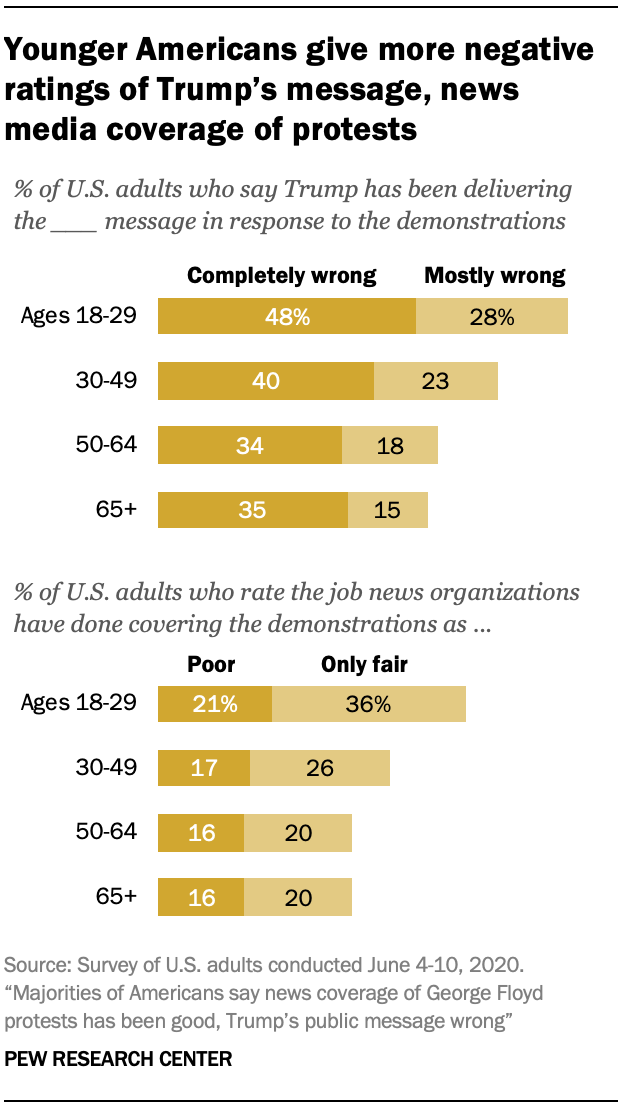 At the same time, adults under 30 also are more critical of the news media’s coverage than any other age group, with 43% rating it as excellent or good and 56% giving it a fair or poor grade. Among older Americans, majorities give the news media a positive assessment.

That negative assessment of the news coverage from young adults may be connected to their view that a number of important storylines have not been getting enough media attention. Americans ages 18 to 29 are more likely than their elders to say five of the six storylines explored in the survey have received insufficient coverage. That includes 66% who say there has been too little coverage of nonviolent protests and 59% who say the larger issue of race relations is not getting enough attention.

The only exception is the question about violence surrounding the protests: About one-in-five adults under 30 say the news media should be covering this more, similar to other age groups.

And in keeping with their overall news media consumption habits, Americans 65 and older comprise the age group most likely to follow the demonstrations very or fairly closely (90%). But it is 18- to 29-year-olds who are most likely to be discussing them with others – nearly half (46%) say they discuss the protests almost all of the time or most of the time.

Next: 1. About four-in-ten U.S. adults are following news about George Floyd protests very closely and discussing it with others often
← Prev Page
You are reading page1Page2Page3Page4Page5Page6
Next Page →

Majorities of Americans Say News Coverage of George Floyd Protests Has Been Good, Trump’s Public Message Wrong
On balance, Americans say too much news coverage has focused on acts of violence during protests, too little on nonviolent protestsYoung adults stand out for discussing the protests more than older adults, being particularly negative on Trump’s message and wanting more coverage of most issues
1. About four-in-ten U.S. adults are following news about George Floyd protests very closely and discussing it with others often 2. In protest response, Americans say Donald Trump’s message has been wrong, news media coverage good 3. Large partisan divide on news media's performance and the president’s message, smaller divide on attention to events Acknowledgments Methodology