Reactions to the events surrounding and following the death of George Floyd also have some significant differences by party and party affiliation across U.S. adults overall. This analysis offers a look at differences by party overall, a lens used for much of the Center’s work connected to the American News Pathways project.

By several measures, Democrats and those who lean Democratic are more closely following and more engaged with the news surrounding Floyd’s killing than Republicans and those who lean Republican. Wide partisan gaps emerge between members of the two parties when evaluating the performance of the news media and Donald Trump’s response to the protests. And there are also differences between Republicans and Democrats on their evaluations of the amount of media coverage devoted to several key storylines, most notably the broader issue of race relations in the country.

Democrats more likely to follow and discuss news of the demonstrations 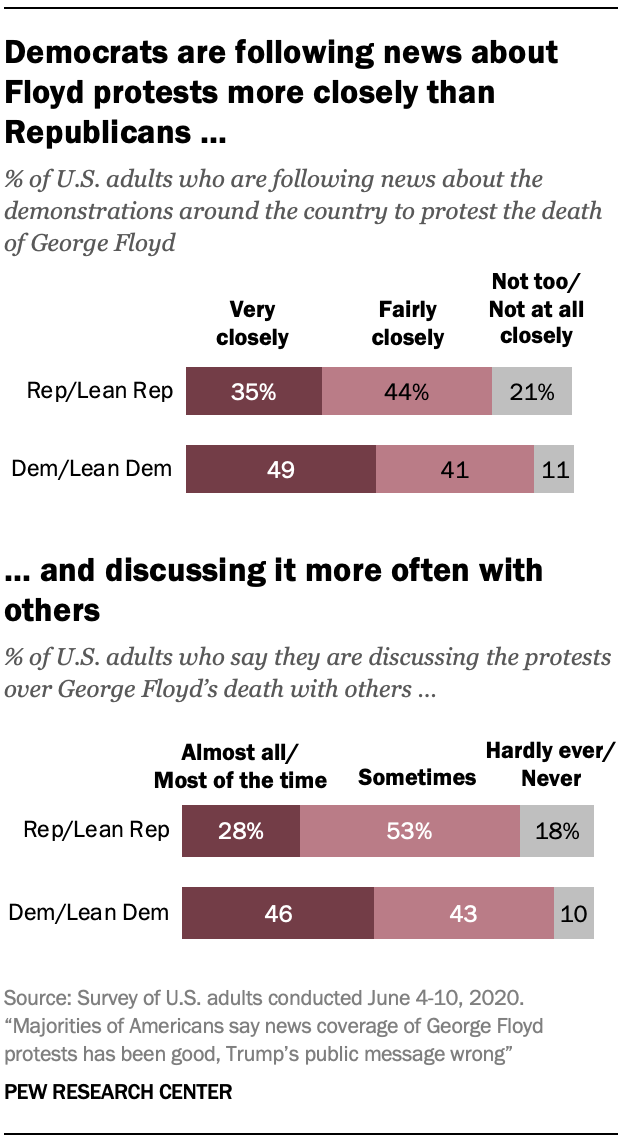 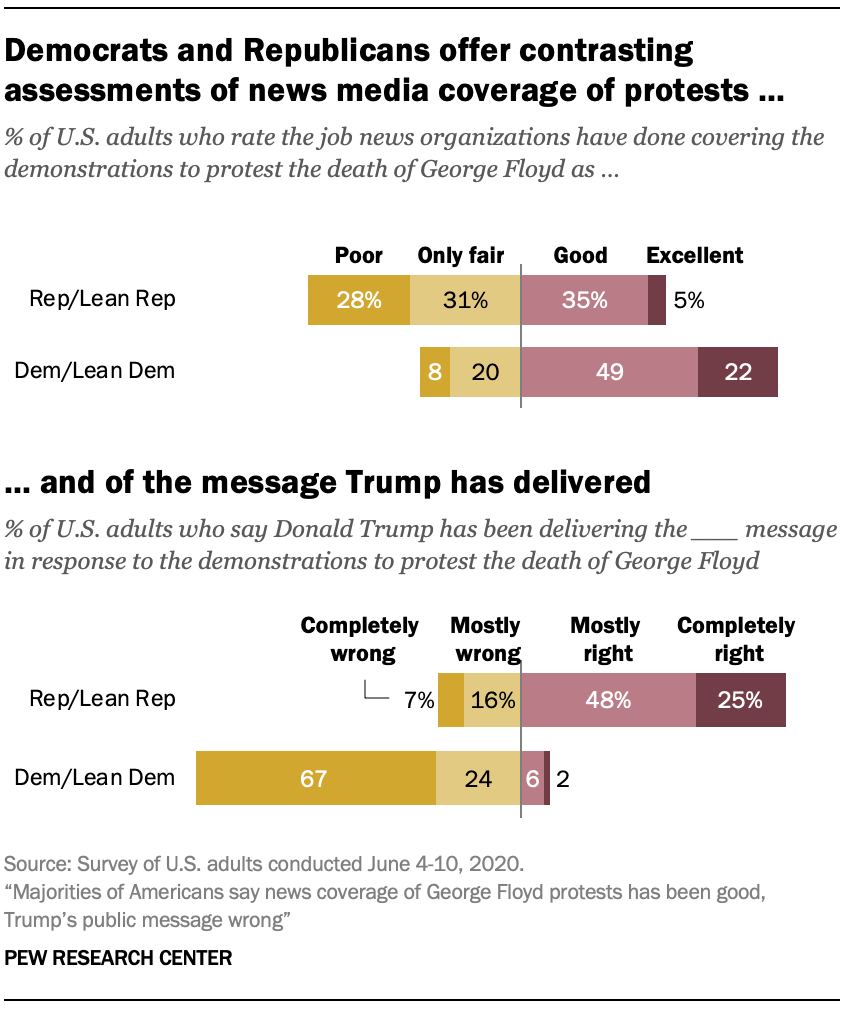 Roughly seven-in-ten Democrats and Democratic leaners (71%) say news organizations have done a good (49%) or excellent (22%) job covering these events. But among Republicans and Republican leaners, the number awarding good or excellent assessments of the news media’s coverage falls to 40%, while 58% give the coverage a fair or poor evaluation.

The differences are even more stark on assessments of the message delivered by Donald Trump during the protests. While 73% of Republicans say his message has been completely or mostly right, only 8% of Democrats agree. Instead, the vast majority of Democrats (91%) say Trump’s message has been wrong, including about two-thirds (67%) who say he has delivered a completely wrong message – a sentiment shared by just 7% of Republicans.

When asked about media attention to specific aspects of the coverage of the demonstrations, partisan differences vary, depending on the topic.

No storyline asked about generates more partisan disagreement than coverage devoted to the larger issue of race relations surrounding the killing of George Floyd and the subsequent protests.

Nearly half of Republicans (47%) say that subject has gotten too much media attention, but only one-in-ten Democrats (10%) agree with that statement. Conversely, about half of Democrats (52%) say the news media have given the topic too little attention, a view that is shared by only 21% of Republicans.

While 55% of Democrats say the news media are paying the right amount of attention to the circumstances surrounding Floyd’s death, fewer Republicans (39%) agree. Democrats also are more likely than Republicans to say that the media are devoting the right amount of coverage to acts of violence and destruction around the protests (44% vs. 25%, respectively), although substantial segments of both parties (46% of Republicans and 43% of Democrats) say there has been too much coverage of this violence.

For several storylines, broadly similar shares of both parties the amount of news media attention is about right. For example, 42% of Republicans and 48% of Democrats say that the actions of the police and National Guard are receiving the right amount of attention. That’s the case even though about twice as many Republicans (28%) as Democrats (15%) say journalists have devoted too much coverage to that storyline.

Similarly, 52% of Republicans and 53% of Democrats agree the news media have paid the proper amount of attention to the decision about whether to prosecute the Minneapolis police officers involved in George Floyd’s death. Again, however, Republicans are more likely than Democrats, by a margin of 19% to 7%, to say there has been too much focus on that storyline.

Democrats (55%) and Republicans (48%) also largely agree that there has been too little attention paid to the nonviolent protests by demonstrators, though more Republicans (20%) than Democrats (6%) say the media have spent too much time on that aspect of the story. 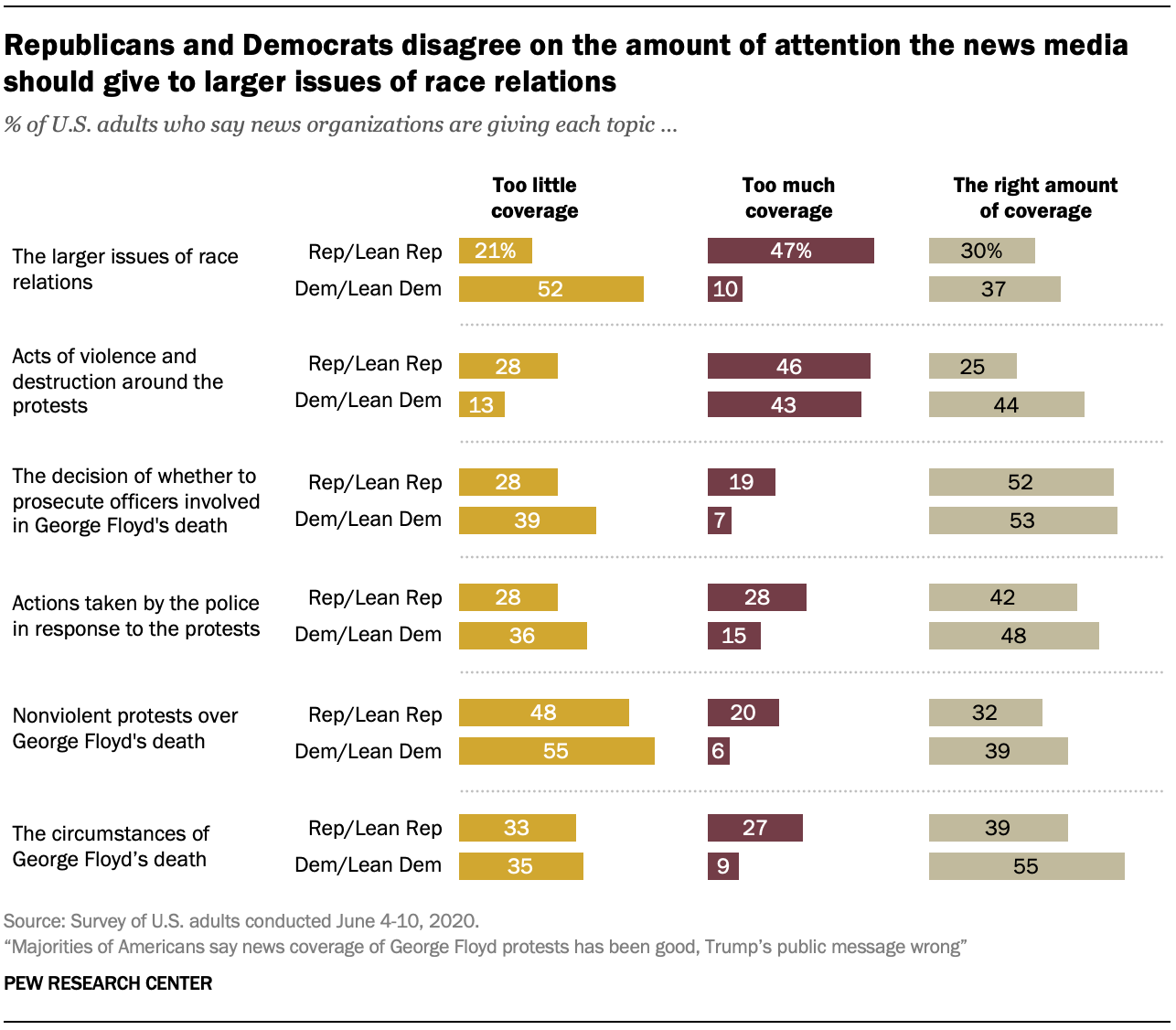