The American public is more likely than not to say that the news media are serving key functions through their coverage of the COVID-19 outbreak. But dramatic partisan differences emerge, which is consistent with deep-rooted partisan gulfs in attitudes toward the news media prior to the outbreak.

Survey respondents were asked about their views of four elements of the news media’s coverage of the coronavirus outbreak: whether the coverage is giving them the information they need, or not; whether it is largely accurate or inaccurate; whether it is benefiting the public or the media themselves; and whether it is helping or hurting the country.

Overall, more Americans see the news media as fulfilling these key roles during this crisis than not, which is in line with other recent findings showing that most Americans think that the news media are doing fairly well in covering the outbreak more generally.

The news media receive the highest marks for whether they are keeping the public informed. Nearly six-in-ten Americans (59%) say that the news media’s coverage is getting them the information they need, compared with far fewer – about a quarter (24%) – who say coverage is not serving that role. The remainder (17%) say that neither phrase reflects their view.

The public also is much more likely to think that coverage of the outbreak is largely accurate (49%) rather than largely inaccurate (24%). And more Americans see the news media’s coverage as working for the benefit of the public (48%) and helping the country (46%) rather than benefitting the media themselves (36%) or hurting the country (34%). On each of these questions, between 15%-26% of respondents choose neither option.

This overall sense that news media are performing these key functions in this crisis is similar to the public’s general views that the news media do well at a number of specific roles, especially at the local level. For example, Americans say that one of the most positive things that the news media do is simply report the news and provide important information. And Americans overwhelmingly go into national news stories expecting they will be accurate. 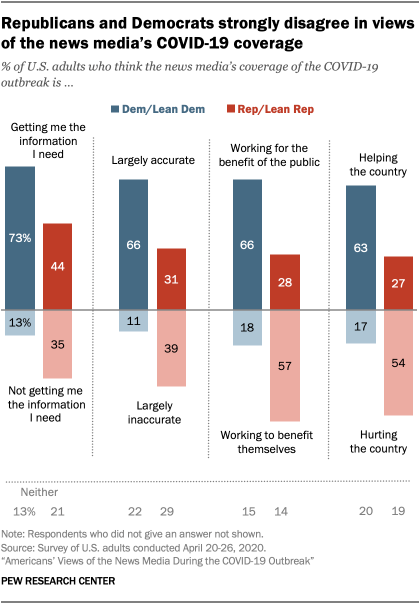 Republicans and Republican-leaning independents are between 29 and 38 percentage points less likely than Democrats and Democratic leaners to hold a positive view of the news media’s coverage of the COVID-19 outbreak across the four different roles. For example, while two-thirds of Democrats (66%) think the news media are working for the benefit of the public, roughly three-in-ten Republicans (28%) share this assessment. More than half of Republicans (57%) say the media are working to benefit themselves.

These partisan divides are even larger among those at the ideological ends of each party – liberal Democrats and conservative Republicans are even less likely to see eye to eye. For instance, the 35 percentage point divide between the two parties in thinking that news coverage of the coronavirus outbreak is largely accurate grows to 46 points between liberal Democrats (72%) and conservative Republicans (26%). 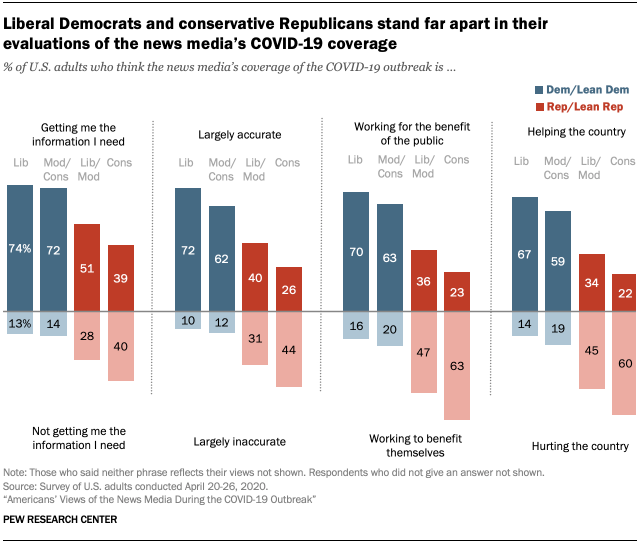 Republicans are particularly likely to think that the news media’s coverage is too negative. Two-thirds (66%) of Republicans and Republican leaners say this, compared with about a quarter of Democrats and Democratic leaners (24%). Instead, Democrats are far more likely to say the coverage struck the right tone (60%, vs. 25% of Republicans).

Next: 2. Americans are more negative in their broader views of journalists than they are toward COVID-19 coverage
← Prev Page
Page1You are reading page2Page3Page4Page5
Next Page →