An overwhelming majority of all U.S. adults (92%) said in late March that they were fairly or very closely following news about the COVID-19 pandemic that has dominated media coverage for weeks. But within that large share, some notable differences emerge by age – particularly among those following news most closely.

Those differences are most pronounced between the youngest and oldest Americans, according to survey data that is part of Pew Research Center’s Election News Pathways project. More than two-thirds of adults ages 65 or older (69%) said they were following news of the pandemic very closely. At the other end of the spectrum, about four-in-ten Americans between the ages of 18 and 29 (42%) said they were paying as much attention to COVID-19 news. Those adults ages 30 to 49 and ages 50 to 64 fall in between.

Furthermore, these differences persist over time. Even as the public’s attention to news about the coronavirus outbreak grew from the first half to the second half of March, that growth did not occur equally across all age groups, with attention among the youngest cohort remaining behind others.

Americans were asked how closely they are following coronavirus news, first in a survey administered from March 10-16, 2020, among 8,914 U.S. adults and again in a survey from March 19-24 among 11,537 adults. (All survey participants are members of the Center’s American Trends Panel.) In that short period of time – when reported U.S. COVID-19 cases and fatalities quickly mounted and efforts by government and public health experts to respond to the outbreak intensified – overall attention to news about the outbreak remained extremely high, with the share following it very closely rising from 51% to 57% over this period. 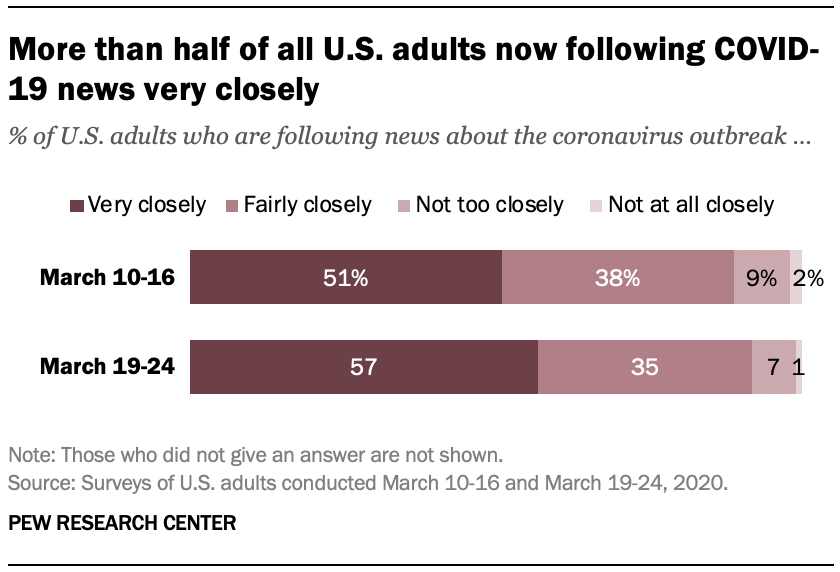 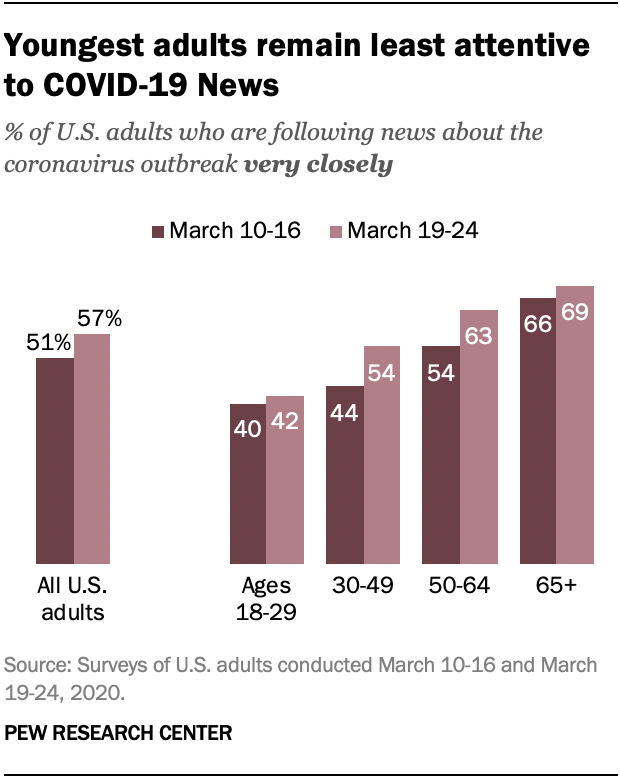 It is difficult to recall an event that has commanded as much public attention for as extended a period of time as the current COVID-19 outbreak.

In a first survey conducted March 10-16, fully 89% of U.S. adults said they were fairly or very closely following coverage of the story. The other 11% said they were following it not too closely or not at all closely.

A second survey was conducted just a short while later, from March 19-24. In that time, news and events related to the virus occurred at a breakneck pace: the U.S. neared having the most confirmed COVID-19 cases worldwide, New York City became the epicenter of the virus, professional sports teams, public schools closed in many areas across the country and many governors began ordering state residents to stay at home, while reported cases and confirmed deaths in the U.S. about tripled.

During this period, the portion of Americans who said they were following news about the coronavirus fairly or very closely remained extremely high, at 92%, with some increase in those expressing the greatest intensity. Roughly half (51%) reported following the news very closely in mid-March, a figure that grew to 57% later that month.

Within those following COVID-19 news the most, differences emerge by age, both in general and over time. The youngest age group, those ages 18 to 29, has remained the least engaged with COVID-19 news; the oldest – those ages 65 and older – has been the most engaged. Those ages 30 to 49 and ages 50 to 64 fall in between, but their attention grew over time.

Attention among those ages 65 and older did not change much between the two time periods, but this may largely be due to their very high level of interest from the outset. Even during the first survey, fully two-thirds said they were following news very closely, something that could reflect both the news consumption habits of senior citizens as well as warnings that they were among those most vulnerable to the new virus. In the March 16-24 survey that number remained largely unchanged at 69%.

But the increasingly sobering news of the pandemic had little impact on the group paying the least attention, those 18 to 29 years of age. Four-in-ten said they were following news about the virus very closely in the first survey, a figure that remained almost the same later in March (42%).

All in all, the youngest adults, those ages 18 to 29, are the least likely to say they are following news about the coronavirus very closely, while the oldest adults ages 65 and older are the most likely to do so. That level of engagement remained consistent from mid to late March.