While coverage of the COVID-19 pandemic consumes the nation’s news, people whose most common pathway to political and election news is through social media are less likely than others to be closely following that coverage. 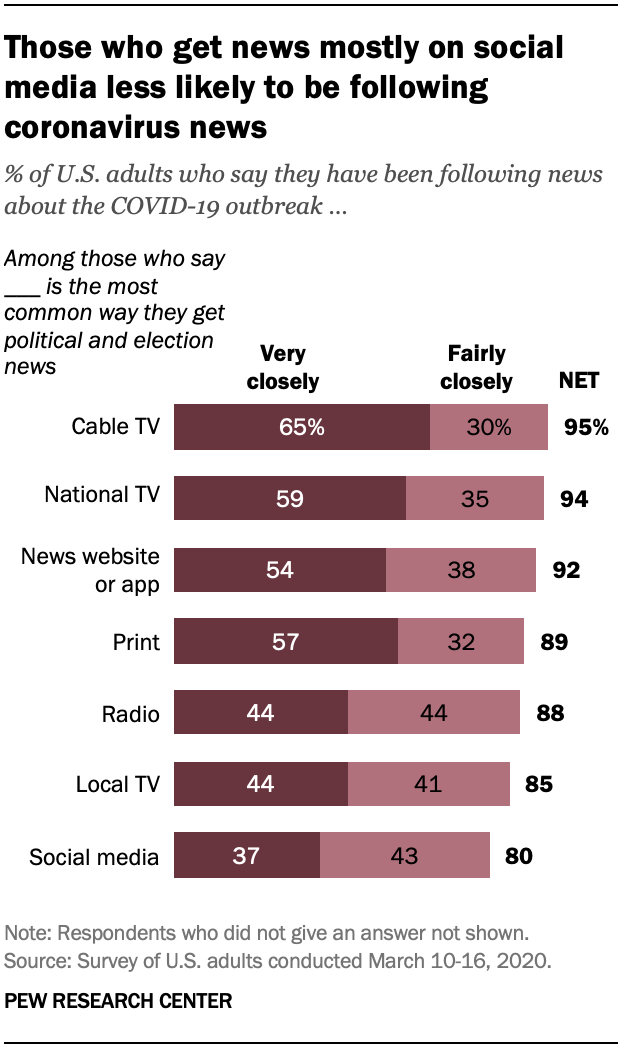 And more of these social media news consumers say they have seen at least some misinformation about the pandemic, according to a survey conducted March 10-16, 2020, as a part of Pew Research Center’s Election News Pathways project.

These responses may help explain another finding: Those who use social media as their most common news pathway – 18% of U.S. adults overall – fare comparatively poorly when it comes to answering a question about when a vaccine might be available. These findings come from a survey of 8,914 U.S. adults who are members of the Center’s American Trends Panel.

One way to understand news audiences in today’s complex environment is to look at consumers through the prism of their most common pathway for getting political news: print, radio, local television, national television, cable television, social media sites and news websites or apps. 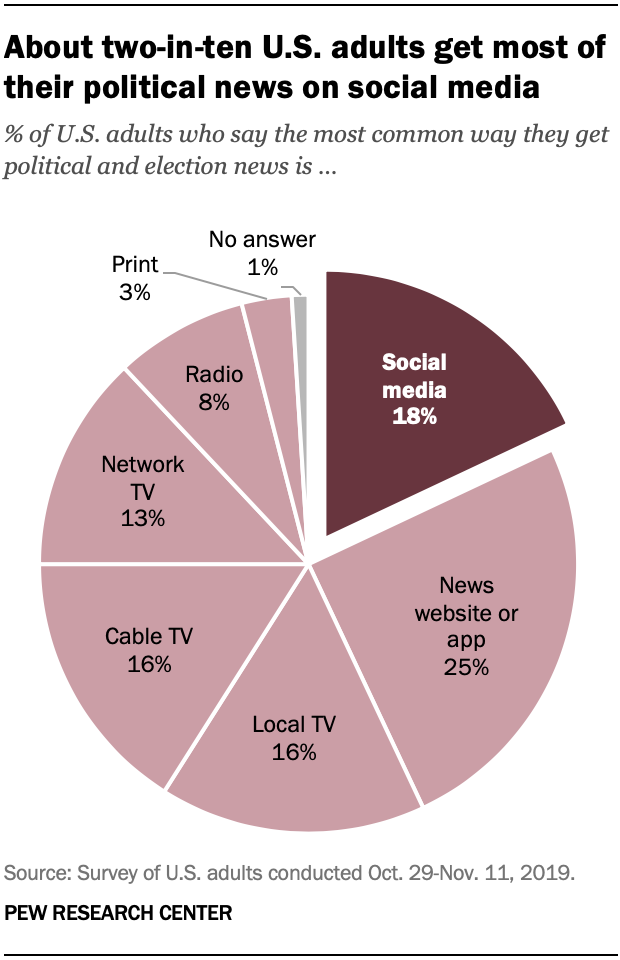 Overall, the 18% of Americans who are “social media first” stand out as younger, more likely to be Hispanic, and less interested in political news, though they aren’t strongly characterized by any particular partisan leaning.

About four-in-ten of those who depend on social media for their political and election news (37%) say they are following news about the outbreak very closely, the lowest percentage of any news pathway asked about. Those who mostly rely on local TV and radio are next-lowest, with 44% of each group saying they are following COVID-19 coverage very closely. That compares with about two-thirds (65%) of those who mostly rely on cable TV for political news.

In all, eight-in-ten social media news consumers say they have been following news of the outbreak at least fairly closely. While still a strong majority, it is again the lowest percentage for any of these seven news groups.

By way of comparison, 95% of those who primarily use cable television for political news, 94% who use national TV and 92% who rely on news websites have been following the outbreak fairly or very closely. 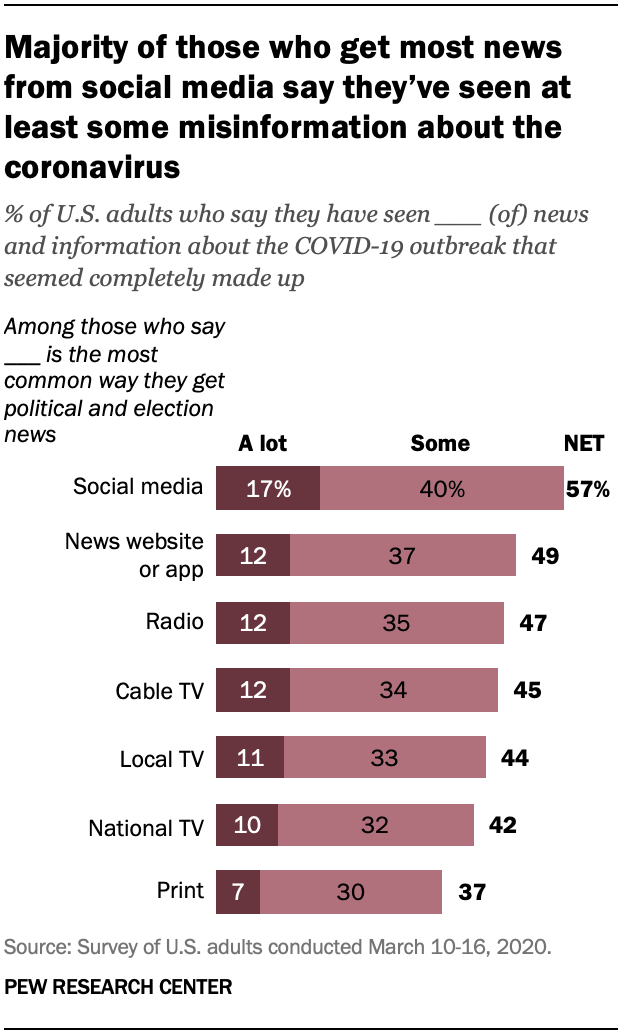 And some of what social media news consumers have seen has been problematic. More than half (57%) of those who rely mostly on social media for news say they have encountered some or a lot of news and information about the outbreak that seemed completely made up. That is the highest percentage for any of the news pathway groups. It stands in especially stark contrast with the small portion of those who prefer print products for news, 37% of whom say they’ve come upon made-up news.

Regarding the information they’ve seen coming from the media, social media news consumers were more likely than most to say that news sources have exaggerated the threat posed by the virus. Overall, 70% of them say the media greatly or slightly exaggerated the risks, with only those in the radio group (69%) and news website group (67%) as likely to see those exaggerations.

At the same time, 45% of social media news consumers say the media greatly exaggerated the risks – among the highest percentages of the seven groups, along with radio consumers (44%). 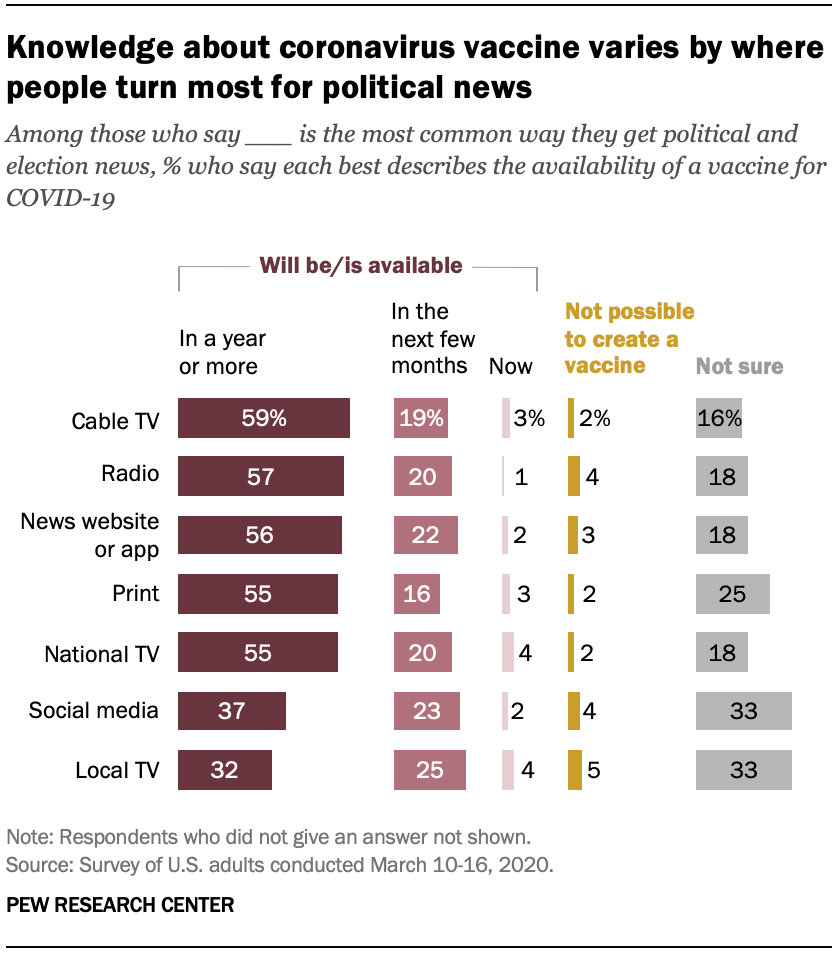 The survey also asked if respondents know when a vaccine for COVID-19 might be available. About four-in-ten (37%) of the social media news consumers selected the answer that is in line with statements by public health experts: that it would take a year or more to become available. The only group with a similarly low percentage answering correctly is the local TV group, at 32%. At least half of all of the other groups said it would be a year or more.

This is primarily because a greater share of social media-first consumers express uncertainty. One-third of social media news consumers say they are not sure about the answer (33%), a number again rivaled only by local television users (33%).

On the most likely source of the new coronavirus, social media news consumers were also slightly more likely than those who turn to other pathways to say that the virus was created in a lab, either intentionally or unintentionally. However, this is more related to the fact that younger adults are more likely to give this answer, regardless of what platforms they use.