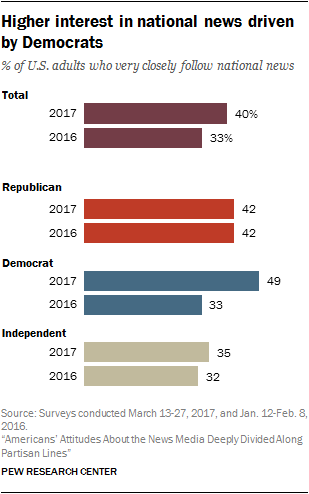 Partisan differences are evident not just in Americans’ news attitudes but also in their news practices.

Interest in national news increased over the past year, with four-in-ten Americans now saying they very closely follow national news, compared with a third in 2016. The growth occurred almost solely among Democrats, whose rate of interest jumped 16 points from 33% then to 49% today.

The heightened overall interest in national news does not carry through to local, neighborhood or international news. Interest in local news actually saw a slight decline (33% follow local news very closely, compared with 37% in 2016) while interest in international and neighborhood did not change significantly. There were also no party-line changes here other than among independents whose interest in local news fell 9 points from 2016 (35% saying they very closely follow local news) to 2017 (26%). (Topline numbers available here and party breakdowns can be found in the detailed tables.)

Use of mobile devices for news continues to grow

In all, 85% of Americans ever get news on a mobile device, the same proportion who do so on a desktop computer. And, among those who get news both ways, mobile devices are increasingly preferred. Nearly two-thirds (65%) of U.S. adults who get news on both mobile and desktop prefer mobile. This is up from 56% in 2016. (The question was not asked in 2013.)

This increase in mobile news use occurred only among Democrats: While 37% of Democrats said they got news often on mobile devices in 2016, 52% say so today – a 15-point increase. (The gains here were not due to the fact that Democrats tend to be younger than Republicans; in fact, the largest gains were seen among Democrats 50 and older.)

Preference for mobile over desktop grew equally among both Democrats and Republicans.

News organizations are a larger part of online news consumption, especially among Democrats 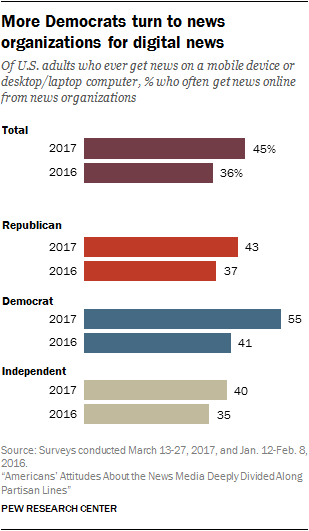 Among the three, news organizations sit at the top as a frequent source for online news and also experienced the largest increase from 2016.

Nearly half of digital news users (45%) often get news from news organizations, up from 36% in 2016. As with interest in national news, this increase is driven primarily by Democrats (55% often get news this way today, up from 41% in 2016). No significant shifts occurred among Republicans or independents.

The share of online news consumers who often get news there from people they know well remained roughly the same as it was last year (16% today, 15% in 2016), including within both political parties. And there was only a small change in the proportion of Americans who say they often get news from people they don’t know well: 9% today compared with 6% in 2016, with small growth across Republicans, Democrats and independents. (Topline numbers are available here and party breakdowns can be found in the detailed tables.)

Online news consumers were next asked to rate the accuracy of the news they get from each of those three types of sources (news organizations, people you know well and people you don’t know well). Democrats, who as noted are turning to news organizations online at higher rates than Republicans, also give these outlets higher marks for accuracy. A third of digital-news-using Democrats who turn to news organizations for online news rate this news as very accurate, compared with 8% of Republicans who get online news that way.4 There was also a wide gap in 2016, though not to the same degree (22% of Democrats who got news online from these sources versus 10% of Republicans). Republicans and Democrats did not differ in their accuracy ratings of the other two source types. Overall, among those who get news from each source, there were no significant year-over-year changes in accuracy ratings (full data available in the topline). 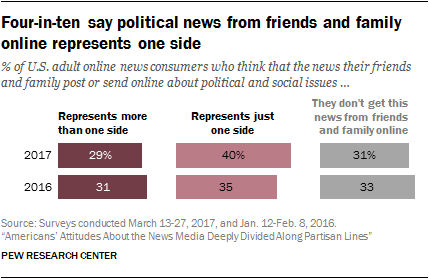 The survey also asked about the degree of balance in the political news Americans get from family and friends online: Does it represent just one side, or multiple sides? Overall, 40% of Americans say their social circle posts primarily one-sided news. This represents a small rise from 2016, when 35% said this, with Republicans and Democrats equally likely to say this both years.

All in all, then, news from one’s personal circle remains one area in which Democrats and Republicans largely agree and which saw little year-to-year change.

In judging the trustworthiness of a story, Americans take a variety of considerations into account 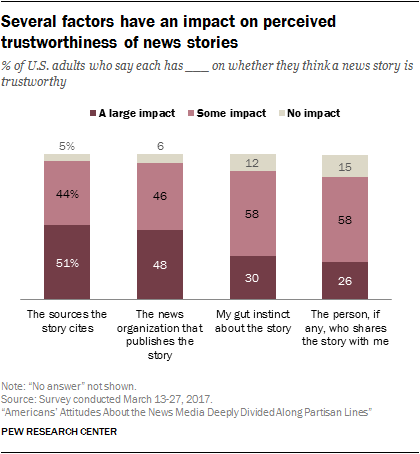 Among four possible considerations individuals could take into account when deciding whether or not a story is trustworthy, each has at least some impact among sizeable majorities of Americans. Two of the four, however, stand out as being more likely to have a large impact. About half of U.S. adults say the sources the story cites (51%) and the story’s publisher (48%) have “a large impact” on trust. Three-in-ten say their gut instinct about the story has a large impact, while about a quarter (26%) say they look to the person who shared the story as a major factor in determining whether they trust it.

Democrats are more likely to give the sources a story cites a lot of weight in judging its trustworthiness (58%, compared with 48% of Republicans) and the same holds true for what news organization publishes the story (56%, versus 47% of Republicans). Both parties, however, have these two factors at the top of their lists. On the other hand, Republicans are more likely than Democrats to cite their gut instinct: About four-in-ten Republicans (38%) say this has a large impact, compared with about a quarter of Democrats (26%). Republicans rank “gut instinct” higher than the person who shared the story, while Democrats cite both as large impacts at roughly the same rate.

Other data add nuance to these findings and suggest that who shares the story might sometimes be a larger factor in assessing accuracy than it appears here. Previous studies have shown that online news consumers are more likely to take a follow-up action (such as searching for more information) when a news story comes from a friend or family member than when it comes directly from a news organization, and that friends’ recommendations play a larger role than news outlets’ reputations in motivating someone to click on a link to a news story on Facebook.