The main source of data for this report comes from a survey that was fielded over two weekends, March 13-15, 2015 and March 20-22, 2015, among a sample of 2,035 adults 18 years of age or older. The survey was conducted by GfK through OMNIWEB, a nationally representative omnibus online survey using GfK’s KnowledgePanel. GfK panel members are recruited through probability sampling methods (address-based samplings and random digit-dialing telephone samplings) and include both those with internet access and those without. For non-internet households, internet access and a laptop for the completion of online surveys are provided.

GfK continually recruits new panel members throughout the year to offset panel attrition as people leave the panel. The survey was conducted in English. The completion rate for the first weekend was 33.5%, while for the second weekend it was 30.2%.

The final sample was weighted using an iterative technique that matches demographic distributions to parameters from the 2014 Census Bureau’s Current Population Survey (CPS). This weight is multiplied by an initial sampling or base weight that corrects for differences in the probability of selection of various segments of GfK’s sample and by a panel weight that adjusts for any biases due to nonresponse and noncoverage at the panel recruitment stage. Details about the GfK panel-level weights can be found at http://www.gfk.com/Documents/GfK-KnowledgePanel-Design-Summary.pdf.

The accompanying table shows the unweighted sample sizes and the error attributable to sampling that would be expected at the 95% level of confidence for selected groups discussed in the report. 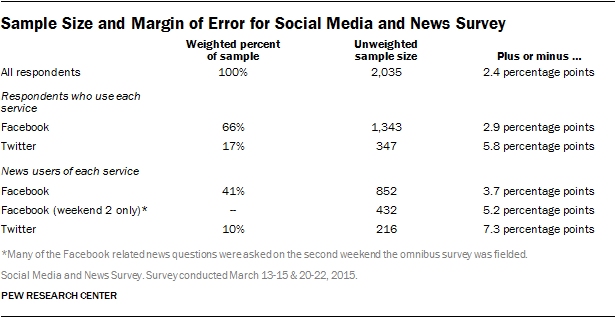 Some of the data in the report is drawn from a study conducted using GfK’s KnowledgePanel in 2013. For the methodology of the 2013 Facebook and News study, click here.

The American Trends Panel (ATP), created by Pew Research Center, is a nationally representative panel of randomly selected U.S. adults living in households. Respondents who self-identify as internet users (representing 89% of U.S. adults) participate in the panel via monthly self-administered Web surveys, and those who do not use the internet participate via telephone or mail. The panel is being managed by Abt SRBI.

Data in this report are drawn from the first wave of the panel, conducted March 19 to April 29, 2014 among 2,901 web respondents. All current members of the American Trends Panel were originally recruited from the 2014 Political Polarization and Typology Survey, a large (n=10,013) national landline and cellphone random digit dial (RDD) survey conducted January 23 to March 16th, 2014, in English and Spanish. At the end of that survey, respondents were invited to join the panel. The invitation was extended to all respondents who use the internet (from any location) and a random subsample of respondents who do not use the internet.

The ATP data were weighted in a multi-step process that begins with a base weight incorporating the respondents’ original survey selection probability and the fact that some panelists were subsampled for invitation to the panel. Next, an adjustment was made for the fact that the propensity to join the panel varied across different groups in the sample. The final step in the weighting uses an iterative technique that matches gender, age, education, race, Hispanic origin and region to parameters from the U.S. Census Bureau’s 2012 American Community Survey. Population density is weighted to match the 2010 U.S. Decennial Census. Telephone service is weighted to estimates of telephone coverage for 2014 that were projected from the January to June 2013 National Health Interview Survey. It also adjusts for party affiliation using an average of the three most recent Pew Research Center general public telephone surveys, and for internet use using as a parameter a measure from the 2014 Survey of Political Polarization. Sampling errors and statistical tests of significance take into account the effect of weighting. The Hispanic sample in the American Trends Panel is predominantly native born and English speaking.