Nearly six years after the U.S. Senate defeated President George W. Bush’s immigration policy overhaul, there is another major legislative effort to change the nation’s immigration system. Back in 2007, the most vocal opponents of the Bush plan included conservative talk hosts, according to PEJ research. On the airwaves, they took credit for defeating the measure and in a sign of their impact, then Republican Senator Trent Lott reacted to the bill’s derailment by saying that “talk radio is running America. We have to deal with that problem.”

Will the influential conservative talk masters attempt to galvanize public opinion against this bill to the same degree and with the same ferocity as last time? The early indications are perhaps not.

In 2007, the anti-immigration reform charge was led by hosts such as Sean Hannity, Rush Limbaugh, Lou Dobbs (then at CNN) and Michael Savage. During the crucial period when the bill’s fate was being decided, (from mid-May through mid-June, 2007), those conservative talk show hosts made immigration their No. 1 topic, filling nearly a quarter (23%) of their airtime discussing legislation they labeled “amnesty,” according to a PEJ study during that time. Indeed, they devoted about seven times more attention to the subject than the liberal talk hosts. 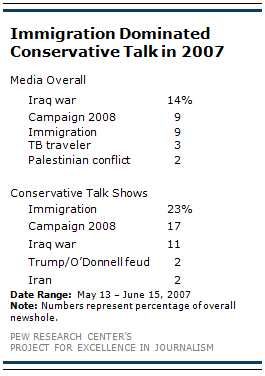 Today, some of these hosts seem to have softened their stance on the issue, particularly Hannity, who has his own radio program as well as his Fox News Channel program.

On November 8, 2012, Hannity publically reversed course by advocating a legalization process for unauthorized immigrants currently living in the United States. “We’ve got to get rid of the immigration issue altogether; it’s simple for me to fix it. I think you control the border first. You create a pathway for those people that are here, you don’t say you gotta go home. And that is a position that I’ve evolved on,” he said.

Limbaugh, this time around, initially voiced opposition to the idea of legalization, stating on January 28, 2013, that “it’s up to me and Fox News” to stop “amnesty.”

Yet the next day, Republican Senator Marco Rubio, one of a group of senators that has devised a plan allowing for legalization of some 11 million undocumented immigrants, appeared on Limbaugh’s broadcast. While Limbaugh did not explicitly endorse the plan that Rubio described on the show, he did praise the senator, saying “what you are doing is admirable and noteworthy. You are recognizing reality.”

Lou Dobbs, whose hard-line stance on unauthorized immigration was perhaps his signature issue when he was on CNN, endorsed Rubio’s plan on his Fox Business Network program. “I have to applaud the outline that you’ve put forward,” said Dobbs on his January 28 show, where Rubio was also a guest.

Another conservative Fox host, Bill O’Reilly also spoke with Rubio in January and expressed agreement with him. “I like your program. I think it’s fair,” said O’Reilly after Rubio outlined the plan.

There is still, however, some deep seated opposition among other conservative talkers.

And Glenn Beck, the former Fox News host who now reaches his audience through his internet television network among other platforms, strongly criticized the immigration plan on the table in his January 30 radio program, calling it amnesty. “You’ve got John McCain, Lindsey Graham, and now Marco Rubio joining them because Marco Rubio just has to win elections. I’m done. I’m done. Learn the Constitution. Somebody has to keep a remnant of the Constitution alive.”

Still, on balance, the unified front of conservative talk show hosts that unrelentingly attacked the 2007 immigration measure seems to have fragmented, and softened somewhat this time around.