As was the case four years earlier, the strategic aspects of the campaign dominated coverage of the closing weeks of the 2012 presidential race. Taken together, horse-race coverage as well as advertising and fundraising stories–which includes advertising, fundraising, endorsements, and the media’s coverage of themselves-combined for 44% of all the coverage examined. 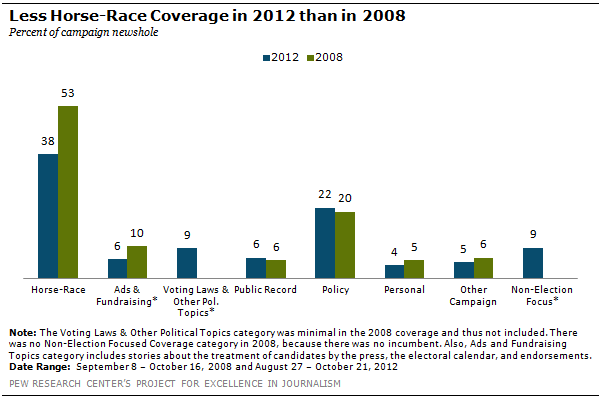 Within the political frames, strategy, tactics, polls and critique of the candidates’ performance made up the most, 38% of coverage. Advertising, money and media treatment made up 6%. Four years ago, those were 53% and just under 10% respectively.

Within the main political frame, tactics and strategy was the biggest component (23% of all campaign coverage studied). Performance critiques of the candidates were next (10%). Poll stories made up 5%.

Stories focused on advertising made up less than 1% of the overall campaign coverage. Fundraising stories filled 2%. Stories about how the media were treating the candidates accounted for 3%.

With the exception of horse-race and other political coverage, there was little basic difference in the media’s campaign news agenda in 2012 and 2008. This year, policy debates accounted for 22% of the overall coverage; in 2008 that figure was 20%. This year, the candidates’ personal stories and public records accounted for 10% of the coverage; in 2008 that number was 11%.

In policy, domestic issues were twice as big as foreign, (14% vs. 7%) About two-thirds of that domestic coverage (10% of overall coverage) focused on one issue-the U.S. economy. That included a discussion of everything from tax policy to social security to unemployment.

Attention to the economy crowded out almost all other domestic issues. From August 27-October 21, the hot-button health care issue accounted for only about 1% of the coverage, about the same amount of attention that was devoted to education. Issues such as energy, immigration and even terrorism (other than the attack on the Libyan consulate) combined to account for about 1% of the media narrative.

Despite the dominance of the economy as an issue in the 2012 campaign, that subject generated only about two-thirds as much coverage as it did in the later stages of the 2008 campaign. During that election, the September 15 collapse of Lehman Brothers helped trigger a financial crisis that reshaped both the focus and the strategic trajectory of that race.

Coverage of the 2012 campaign may in part be defined by what was missing from the media narrative. Although the campaign pits the first African-American president against a man who would be the first Mormon president, there was almost no discussion of the sensitive topics of either race or religion in the homestretch of the campaign.

And judging by the coverage, this campaign was notable for the lack of sustained discussion of some critical social issues. The issue of same-sex marriage (and the repeal of the Pentagon’s "don’t ask, don’t tell" policy) was virtually non-existent. The debate over abortion policy fared little better, accounting for about 1% of the coverage.

The general lack of discussion of social issues in this campaign is similar to what occurred in 2008 when those subjects also received little attention. One notable difference, however, is the subject of race. In 2008, with the possibility of the United States electing an African-American president, the subject of race accounted for about 2% of all campaign coverage.

On the foreign policy side, one issue trumped all the others: turmoil in the Middle East, particularly the September 11 Libyan attack that killed Ambassador Stevens and triggered a major political battle, with Republicans charging that the Obama administration played down the idea it was a terrorist attack for political reasons.  This aspect of foreign policy accounted for about three-quarters of all the geopolitical coverage and 5% of the campaign coverage overall.

In contrast, relations with China represented only about 1% of the campaign coverage overall. Discussion of the Israeli-Palestinian conflict, the dispute once at the heart of the U.S. Mideast policy, also accounted for about 1%. The situation in Iraq was virtually non-existent in the narrative, accounting for less than 1% of the coverage.

But even at that level, Iraq still managed to generate about twice as much attention as any discussion of the war in which the U.S. is still actively engaged, the 11-year-old conflict in Afghanistan. That topic accounted for about one-fifth of 1% of all the campaign coverage studied in the final eight weeks of the campaign.

Due in large part to the upheaval unleashed in the Arab Spring of 2011, coverage of the Mideast was up dramatically over the same period four years earlier-by a factor of 5-to-1 That was the major reason why foreign policy issues in general played a larger role in the 2012 campaign narrative (7%) than they did in 2008 (2%).

In the closing weeks of the 2012 campaign, the candidates’ personal stories received modest attention, accounting for 4% of the overall coverage.

Coverage of the candidates’ public records, including Romney’s career at Bain Capital and Obama’s tenure in office, represented 6% of the overall campaign coverage from August 27-October 21.

And in the case of both personal topics and public record, most of the attention came earlier in that period, during the two convention weeks when the candidates were, in a way, reintroducing themselves to the public.  But in the period from September 10-October 14, attention to both those themes diminished dramatically. 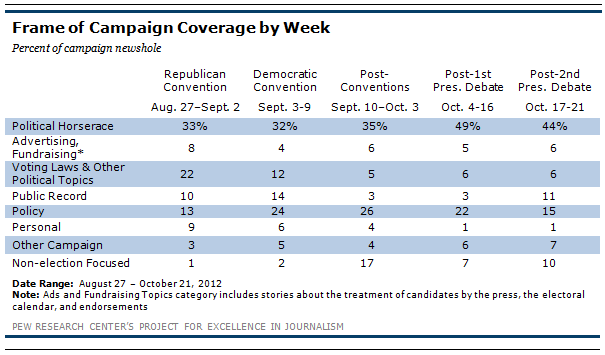 Another 9% of the coverage studied by PEJ included stories that prominently featured one or both of the presidential candidates, but were not primarily about the campaign itself.  Most of that coverage focused on Obama’s role as president.  Of that, a clear majority (5% of coverage overall), involved coverage of developments in the Mideast, including the situation in Iran and the Libyan consulate attack.

Next: Coverage of the Candidates by Media Sector and Cable Outlet
← Prev Page
Page3Page4Page5You are reading page6Page7Page8Page9Page10Page11Page12Page13
Next Page →

Winning the Media Campaign 2012 Tone of Mainstream Media Coverage 2012 vs. 2008: A Different View of Obama The Conventions to the Debates: Set Piece Moments Still Matter The First Debate: How Much it Changed the Narrative
Frame: Which Aspects of the Race Got Attention, and Which Ones Didn't?
Coverage of the Candidates by Media Sector and Cable Outlet The Closing Weeks of the Campaign in Social Media The Mainstream Media Narrative about the Vice-Presidential Candidates Methodology Topline Press Release Slideshow