From the conventions to the eve of the final presidential debate, Barack Obama and Mitt Romney have both received more negative than positive coverage from the news media, though overall Obama has had an edge, according to a new study. 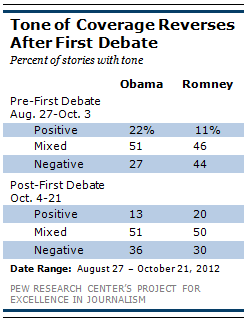 That advantage for Obama, however, disappeared after the debates began in early October and news coverage shifted in Romney’s direction, mirroring the momentum change reflected in many public opinion polls, the study by the Pew Research Center’s Project for Excellence in Journalism found.

Overall from August 27 through October 21, 19% of stories about Obama studied in a cross section of mainstream media were clearly favorable in tone while 30% were unfavorable and 51% mixed. This is a differential of 11 percentage points between unfavorable and favorable stories.

For Romney, 15% of the stories studied were favorable, 38% were unfavorable and 47% were mixed-a differential toward negative stories of 23 points.

Most of the advantage in coverage for Obama, however, came in September in the form of highly negative coverage for Romney. This was a period when the GOP nominee was losing ground in the polls, he was criticized for his comments about Libya, and a video surfaced in which he effectively dismissed 47% of the American public.

Throughout the eight-week period studied, a good deal of the difference in treatment of the two contenders is related to who was perceived to be ahead in the race. When horse-race stories-those focused on strategy, tactics and the polls-are taken out of the analysis, and one looks at those framed around the candidates’ policy ideas, biographies and records, the distinctions in the tone of media coverage between the two nominees vanish.

The portrayal of the two candidates this year in the mainstream press stands in marked contrast to what the Project found in 2008 when then Senator Barack Obama was running against Senator John McCain. In that race, Obama’s coverage was almost twice as positive as it has been this year (36% vs. 19%) and more positive than negative overall (36% positive vs. 29% negative that year). McCain’s coverage four years ago, by contrast, was much more negative than Romney’s this year. In 2008, nearly six in 10 stories about McCain were clearly negative in nature (57%), while only 14% were positive.

One other distinction between 2008 and 2012 is how much the narrative has changed with events. There have been three distinct periods in the coverage of Obama and Romney over the eight weeks studied, one of which favored Obama, the second of which favored Romney and a third that was closer with an advantage for the president.

From the conventions until the first debate, a period of improving polls for Obama, Romney suffered his period of the most negative coverage; just 4% of stories about him were positive while 52% were negative. Coverage of Obama during this period was fairly evenly split (20% positive vs. 24% negative). That narrative reversed sharply with the first debate. For the next two weeks, Romney saw the mixed treatment (23% positive vs. 23% negative) while Obama was caught in the critical loop, with 12% positive and 37% negative. After the second debate, coverage returned to its more general pattern, with an edge for Obama. 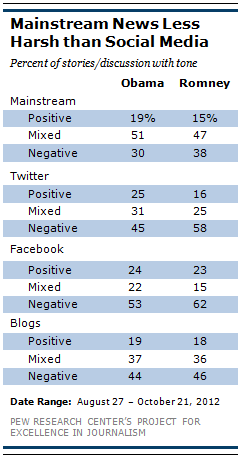 This treatment in the mainstream media also differs markedly from what the study finds in the newer realms of social media: Twitter, Facebook and blogs. There, the narrative about both men has been relentlessly negative and relatively unmoved by campaign events that have shifted the mainstream narrative-more a barometer of social media user mood than a reflection of candidate action. On Twitter, for instance, the conversation about the campaign has consistently been harsher for Romney than for Obama. On Facebook, the tone improved for Obama in October with the debates, despite the sense that the president had stumbled in the first one. And in the blogosphere, neither candidate has seen a sustained edge in the narrative in the eight weeks studied.

The study also reveals the degree to which the two cable channels that have built themselves around ideological programming, MSNBC and Fox, stand out from other mainstream media outlets. And MSNBC stands out the most. On that channel, 71% of the segments studied about Romney were negative in nature, compared with just 3% that were positive-a ratio of roughly 23-to-1. On Fox, 46% of the segments about Obama were negative, compared with 6% that were positive-a ratio of about 8-to-1 negative. These made them unusual among channels or outlets that identified themselves as news organizations.

The study also found a difference between the three network evening newscasts and the morning shows. Obama also fared better in the evening, Romney in the morning.

These are among the findings of the content analysis of 2,457 stories from 49 outlets from August 27, the week of the Republican convention, through October 21, five days after the second presidential debate. For mainstream media, the study included the three broadcast networks, the three major cable news networks, the 12 most popular news websites, 11 newspaper front pages and news programming from PBS and NPR along with radio headlines from ABC and CBS news services. From these outlets, PEJ researchers watched, listened or read every story in the sample and counted each assertion for whether it was positive in nature about a candidate, negative in nature or neutral. For a story to be deemed to have a distinct tone, positive or negative assertions had to outnumber the other by a factor of three to two. Any story in which that was not case was coded as mixed. 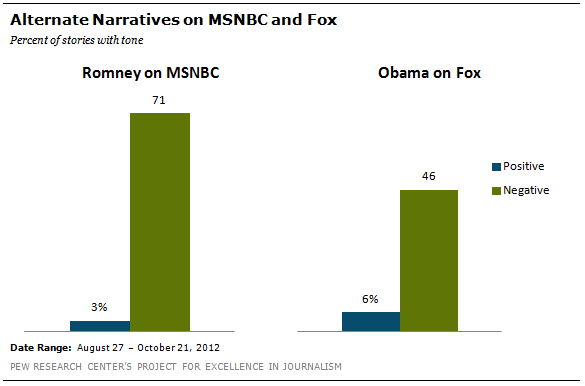 For social media, the researchers combined a mix of traditional human coding with technology from the firm Crimson Hexagon. Researchers trained the computer “monitors” to replicate their human coding according to PEJ rules. For Twitter, the sample includes the full “fire hose” of public tweets. For Facebook, the study includes a large sampling of public posts about the campaign. The study included a sample of several million blogs as well.

The study of the tone in news coverage is not an examination of media bias. Rather, it measures the overall impression the public is receiving in media about each candidate, whether the assertion is a quote from a source, a fact presented in the narrative that is determined to be favorable or unfavorable, including poll results, or is part of a journalistic analysis.

Among the findings of the study:

1. [1] For social media, tone is measured as a percentage of the total conversation. A tweet or blog post might have multiple assertions and each is tallied as percentage of the whole. For mainstream media, the Project tallies tone by stories.

Next: Tone of Mainstream Media Coverage
← Prev Page
You are reading page1Page2Page3Page4Page5Page6Page7Page8Page9Page10
Next Page →

Winning the Media Campaign 2012
Tone of Mainstream Media Coverage 2012 vs. 2008: A Different View of Obama The Conventions to the Debates: Set Piece Moments Still Matter The First Debate: How Much it Changed the Narrative Frame: Which Aspects of the Race Got Attention, and Which Ones Didn't? Coverage of the Candidates by Media Sector and Cable Outlet The Closing Weeks of the Campaign in Social Media The Mainstream Media Narrative about the Vice-Presidential Candidates Methodology Topline Press Release Slideshow