Mobile at this point is a small part of the revenue of the newspapers in this study. In late 2011, on average, mobile accounted for only .9% of the digital revenue stream of the papers that provided us with data-less than even video and targeted advertising. This is still a nine-fold increase from a negligible .1% a year earlier at these papers. 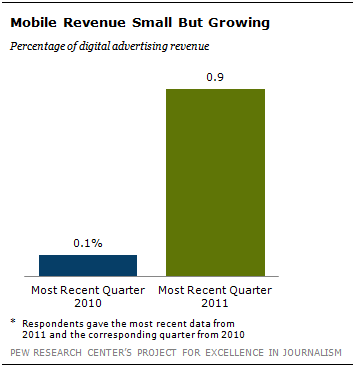 Yet 22 papers, more than half of the sample, reported that they generated no advertising dollars at all from mobile platforms.

That, however, still represented some movement. In the same quarters in 2010, a full 91% of the papers said they had generated no digital ad revenue from mobile devices.

Newspaper executives expressed a good deal of optimism about the potential for mobile, however. And some said their companies were doing somewhat better than the 1% average for the papers that provided detailed data. No other subject during the interviews seemed to generate as much enthusiasm as the prospects for mobile.

It’s going to be "huge," one executive said. That sentiment echoed the optimism of most of the executives interviewed.

One reason for the optimism is the growth of traffic on mobile platforms. Executives from about half of the 13 companies that participated in this study specifically mentioned the rapid growth of their company’s mobile traffic.

At the high end, one company executive said mobile now accounted for about one-fifth of his company’s overall digital traffic. Another reported roughly a four-fold increase in the percentage of mobile traffic in the past 18 months.

Several executives said their own families helped them understand the potential of the phone as an information platform. "I’ve got a nineteen-year-old and a 14-year-old at home and … nine out of 10 things they are doing is on their phone. My son will come to me and say, ‘Hey did you hear about that volcano in Switzerland.’ He didn’t get it from sitting in front of a computer and he didn’t get it from picking up a newspaper; he got it on his phone."

It is also clear from these interviews that newspaper companies consider the phone and tablet to represent very different consumer experiences, which in turn offer different advertising opportunities. The consensus was that while display advertising may be better suited for the tablet-which more closely resembles a legacy media reading experience-the phone will be more conducive to more quick-hit e-commerce opportunities.

One executive, acknowledging that mobile is in its infancy at his company, predicted the phone could become the vehicle for what he called "transactional experiences" that would transform it into a kind of digital credit card. The tablet, he suggested, would be more closely attuned to the print experience and offered a chance for attracting more traditional advertising.

Another executive said that mobile generated plenty of traffic, but "very little money for the moment." But he was optimistic that would grow, and not through the same kind of advertising that papers try to sell on their websites, which is both the opportunity and the challenge. He said he saw mobile technology generating revenue through transactions, such as shopping related activities, rather than through display advertising. He said, "the tablet will provide more of a display advertising opportunity, noting people use tablets like newspapers, with the heaviest traffic coming in the morning or late afternoon.

At the same time, a few executives who spoke to PEJ tempered their enthusiasm for mobile by noting that there are challenges to overcome in order to successfully tap into that revenue stream-including figuring out which advertising opportunities will work most effectively on which platforms.

"The big issue…is who gets the right to deliver the time and location sensitive message. It won’t be everybody that gets the right to come into my pocket and beep me because I just walked into the mall…So how do we, as the newspaper in town, do what we need to do now to make sure a year or two years down the road, we are the ones with permission and a trusted relationship with the consumer."

One concern about mobile is that the dollars found there could be small. One phrase that has become popular among news executives is that print dollars had turned into digital dimes. On mobile platforms, at least one executive told us he worried those digital dimes might be shrunk further, to just two cents. Stating that he isn’t certain what kind of ad execution will work on mobile, he said that that the audience is moving to distribution models that are "less relevant to us."

Some of the executives, even those who were generally optimistic, warned that the industry still has to, in the words of one, "figure mobile out." That attitude seemed to capture a dual sense of both determination and uncertainty, the notion that these companies envision major potential for mobile revenue, but have not yet figured out how to mine it.

Even if mobile isn’t figured out yet-or a significant revenue stream at this point-the executives made it clear they considered it an area that required a major effort.

"You place your bet on every screen right now," said one.