One major issue going forward for the newspaper industry is whether it can begin to grow different kinds of digital revenue. The news industry is now more than 15 years into the transition to digital, a transition that is now also adding mobile. For much of that time, newspapers have focused on trying to sell advertising online that is similar to what they sold in print. That advertising was largely built around printed display ads and classified.

In the digital space, those traditional categories have proven difficult to grow at rates anywhere close to what they earned in print-for a variety of reasons. There are questions about the effectiveness of some online display ads. The rates websites can charge, so-called CPMs, are low because there are so many websites, and the number is constantly growing. Classified advertising revenue in print has collapsed due, in part, to the growth of free alternatives online, such as Craigslist, and the news industry has struggled, though made some progress, trying to develop online alternatives of its own. 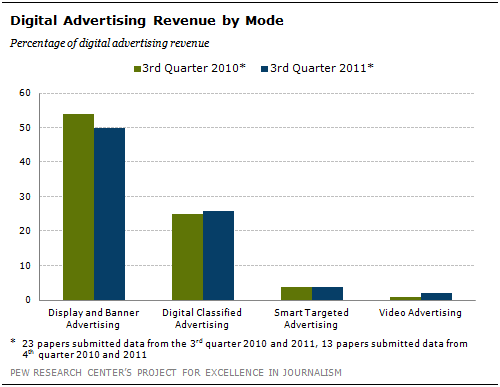 Overall online, the largest share of advertising dollars (46%) goes to search, of which newspapers and news companies have almost no part. Banner or display ads, which news does get, make up 29% of the total, including both targeted and non-targeted ads. Classified makes up another 10%. Video makes up 7%.

The data provided to PEJ reveal that the newspapers in this study are not yet well positioned to take advantage of that growth in targeted advertising. The numbers newspapers provided about   digital advertising platforms included the last quarter for which they had data-which was most often the third quarter of 2011. And they indicate that, for now, papers are relying much more heavily than the digital landscape overall on conventional display and classified.

Overall, the papers studied here derived on average 76% of all their digital revenue in the latest quarter from either conventional display ads or online classified. The largest share (50% of all digital revenue) came from non-targeted display. Classified made up an average of 26%, though at some smaller papers in the study local digital classified is a very small part of the pie.

Meanwhile, other categories-those distinct to digital platforms-are generating much more modest returns. At the papers providing proprietary data, an average of 4% of overall digital ad revenue came from targeted or so-called smart advertising that employs demographic or behavioral targeting. And 2% came from video advertising.

This represents part of the dilemma facing these papers-and the newspaper industry generally. Sales representatives tend to sell what is familiar and what for now yields the largest returns. Yet those categories are not growing and have already proven to be insufficient to keep up with losses in print. And in the future, they are expected to be eclipsed by new categories, particularly targeted advertising.

The data also show very little change or movement toward these newer categories. There was minimal change in the percentage of digital revenue coming from smart and video ads in 2011 compared with a year earlier, when on average, smart display once again accounted for 4% and video accounted for 1% of the overall digital revenues.

The granular nature of the data provided to PEJ, however, shows that there are papers that are bucking the paradox of leaning on revenue categories that are not growing. 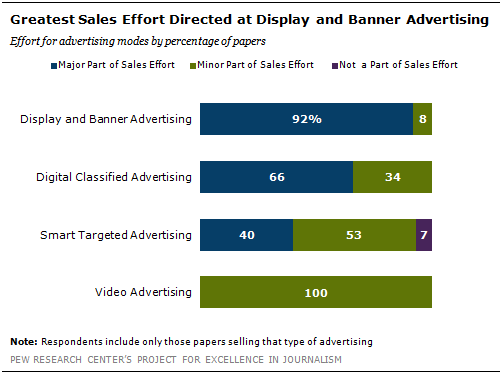 One paper, for instance, derived less than half of its digital revenue from conventional display and classified. This is the larger paper that also showed much more dramatic growth in overall digital revenue and came close to closing the gap between its digital gains and its print losses.

This paper also managed to generate almost as much digital revenue from smart or targeted advertising (15%) as it did from conventional display (20%) in the fourth quarter of 2011-which is also almost four times as much targeted advertising as the sample averaged. This puts the paper on a trajectory to take advantage of the growth in targeted display that is projected online.

The next closest paper was generating 10% of its digital revenue from targeted ads, more than double the average overall. This was a large paper (circulation of nearly a quarter million) in a major metropolitan area. The paper also depended less than average on digital classified and conventional display advertising (65% combined). And it was among the minority of papers that reported making a major effort to sell smart advertising. In other words, its success in selling targeted ads was not an accident.

On the other side of the equation, there were five papers at which classified and conventional display combined to account for at least 95% of the overall digital revenue in 2011. There were some differences in that distribution, however. Two of the papers derived 5% or less from classified and more than 90% from display. Four out of the five also indicated that they expected conventional display to become an increasing share of their digital ad revenue this year. In other words, going forward, they expected to lean even more heavily on these older categories. 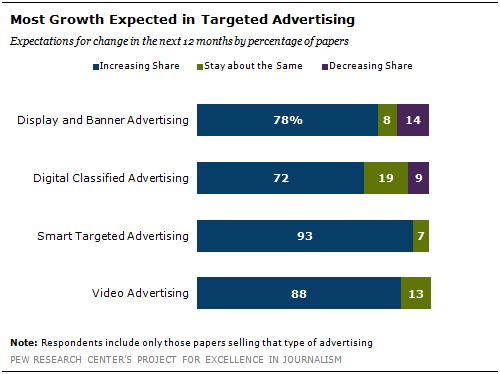 One thing that those five papers had in common was their relatively small audience. All of them had circulations less than 20,000.

Video was also an area that showed some variation. While the papers that provided data averaged just 2% of their revenue from video ads, one paper derived 10% of its digital revenue from video, five times the average. Four more papers reported video revenue in the mid single digits, at 5% or 6%.

Right now, video seems to be more of a goal than a reality. Less than half (44%) of the papers said they were currently selling video advertising. Those tended to be the larger papers (circulation of 50,000 and over). Three-quarters of the papers in this group reported trying to sell video ads.

Tellingly, among the papers involved in video, not one of them indicated that it was a major sales priority, but most of the papers do believe revenue for video will grow. All but two of the papers now selling video ads predicted it would account for a larger share of their digital ad revenue in the coming year.

The digital ad revenue streams also dovetail with newspaper sales priorities. Almost all the papers studied (33) said digital display advertising was a major part of their sales effort. Classified was less important. In all, 66% of the papers that sold digital classified described it as an important part of their sales effort. The third-highest priority, though many fewer papers highlighted it, was digital targeted ads; 40% of the newspapers currently selling them said that they now represent a major sales priority.

Despite the low levels of revenue currently generated, there is some hope for growth potential in those areas. Around 90% of the papers that sold video and smart ads said they expected both those categories to become an increasing share of their digital revenue in the coming year.

And in comments that were included with the data they provided, a number of papers stressed the need to branch out more aggressively in digital sales.

"We must continue to diversify our business plans to add more digital strategies that do not entirely depend on our core business," one paper reported.

"We keep hearing that we have to move to a digital mentality," another paper reported. "Yet we spend time trying to milk the print we have left."

Next: Groupon
← Prev Page
Page2You are reading page3Page4Page5Page6Page7Page8Page9Page10Page11Page12
Next Page →