Many newspaper analysts and insiders have suggested that the industry must find additional revenue streams-beyond advertising and subscription-to ultimately arrive at a mix of revenue streams that constitutes a successful digital business model.

This study probed the degree to which newspapers were trying nontraditional revenue experiments. What we found was that while almost half the newspapers that provided data were developing them, they have thus far generally yielded only modest dollars.

The follow-up interviews with executives, moreover, revealed mixed feelings about the viability of these experiments with nontraditional revenue streams. Some executives voiced concern about the industry’s ability to effectively implement them at a time when sales staffs are already dealing with an array of new advertising products. Other companies were achieving significant success.

The data and interviews suggest companies are almost evenly divided between optimists and pessimists-evidence of a lack of consensus on how to proceed in developing the new business model.

In total, about half of the papers that provided proprietary data said they were trying some form of nontraditional revenue generation. The most common experiment involved the "digital agency" concept, in which newspaper companies act as online marketers and consultants for local businesses-helping them with everything from search engine optimization to building websites to utilizing social media platforms.

Only a few of the papers had tried another concept that has been long discussed, the idea in which the newspaper helps build a digital "retail mall," connecting the newspaper’s users with local merchants and advertisers and allowing them to engage in digital transactions, providing a fee to the newspaper. This concept would involve the paper helping smaller merchants create an online environment and combining the convenience of online shopping with the potential for service and support of local merchants. While the idea is more than a decade old, few papers have moved on it. Now some banks and phone companies have moved toward this business.

In all, only three papers were attempting any kind of mall concept. 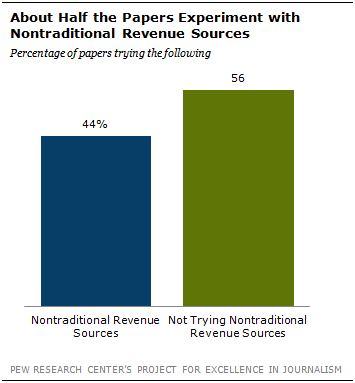 A more granular breakdown of the data also shows that the larger circulation papers in our sample, with circulations of 50,000 and above, were the most likely to have embarked on some form of nontraditional revenue experiment. About three-quarters of the larger papers were involved in such efforts.

Probably the greatest success had come with developing digital agencies that provided consulting advice to advertisers and local businesses.

"We have been positioning ourselves as marketing consultants and approach advertisers from needs and solutions perspective, including social media," one newspaper reported.

"We provide advertisers website construction under the help of local search and maintain some social feedback for a fee," said another.

In some cases the efforts were bringing in only small amounts of money. Of those papers that had developed nontraditional sources, almost two-thirds reported earning less than $10,000 in the most recent quarter. And the median income generated was about $6,500.

Both of these relative successes involved providing "digital agency" services to their clients.

The two papers collecting the most nontraditional revenue were relatively large, with circulations of 50,000 and 60,000.

Despite the relatively low overall numbers across the papers studied, at least some executives said their companies were committed to developing nontraditional revenue streams. One executive, whose company is working with small to medium-sized local business on search engine optimization, reputation management and website development, has hired sales specialists to specifically sell this suite of services. He added that the company is far more excited by the potential for this revenue stream than the daily deal option. 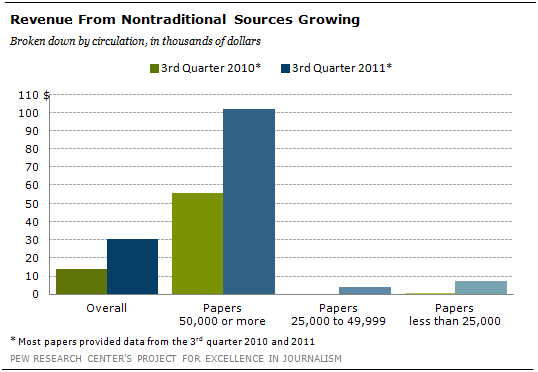 Another executive at a large newspaper company said the organization had already developed its digital agency into a multi-million dollar business and was looking for triple-digit annual growth.

Yet the idea of new or nontraditional revenue streams was one of the areas where we found real division in the thinking at different companies.

One executive explained that while a lot of newspaper companies were trying the digital agency approach, it could only work if you took the time and effort to create a detailed strategy to make the concept work. "You can’t be a little bit pregnant," he said, cautioning that some newspapers were trying to implement these ideas without the proper preparation and commitment.

Another skeptic said he was worried that "we overestimate our digital competencies." While he agreed that the industry had to consider non-traditional revenue streams, he thought newspapers are not in a good position to compete with local ad agencies.

That sentiment was echoed by others, including one executive who said that newspapers might not have the requisite staff to implement such a strategy on sufficient scale.

Next: Retooling the Sales Staff
← Prev Page
Page2Page3Page4Page5You are reading page6Page7Page8Page9Page10Page11Page12
Next Page →