Retrospectives are always popular this time of the year, and the blogosphere last week shared one of the first collections of the year in photos.

The No. 2 subject on blogs from December 5-9 was BuzzFeed’s 45 Most Powerful Images of 2011. Largely the province of news magazines in an earlier media era, the internet-based BuzzFeed, has now moved into the scene, ranking and sharing some of the most dramatic news events of the year. The photos selected ranged from the earthquake and tsunami in Japan to students being pepper-sprayed at UC Davis, from the tornado in Joplin, Missouri to the drought in East Africa.

The images were so popular they resulted in BuzzFeed’s biggest traffic day ever, according to the site’s founder, Jonah Peretti. A week after its posting, the page of images had been viewed almost eight million times. 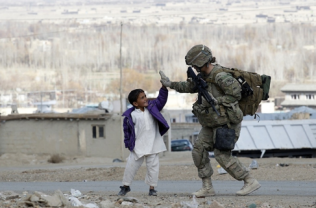 The biggest referrer to the page, by far, was Facebook, which was responsible for over half of the referrals; over 4.5 million clicks came from the social networking behemoth. At a distant second was Reddit, an aggregation site where users post links and then “up vote” posts to give them higher billing on the site, referring about 253,000 people to the images. Twitter was not as much of a driver though certainly had some influence. The network referred about 191,000 visitors over the week’s time and the story was tweeted about 43,000 times.

BuzzFeed already gets about half of its traffic from social sources, but the total popularity of this story far surpasses the usual draw. Another heavily shared post by BuzzFeed, for example, The 100 Best Signs at the Rally to Restore Sanity And/Or Fear, garnered 993,447 in its first 30 days online, with 327,473 referrals from Facebook.

The range of photos selected, according to Megan Garber of Nieman Journalism Lab, may have added to their sharability. “I might not connect personally with photos of, say, the U.S. war in Afghanistan,” Garber wrote, “But I might know one of the protestors who was pepper-sprayed at UC Davis last month. And I might share the post because of that connection.”

Even though this was mainly a web and social media story, the mainstream press was still a big part of the ne 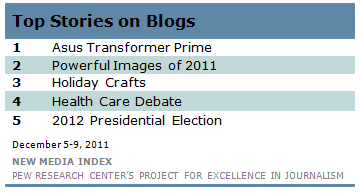 ws. The top images selected came predominately from traditional news agencies- from Reuters, the Associated Press and individual publications like the New York Times and The Oregonian-a few came from independent, self taught photographers, as well.

While most bloggers simply linked to the photos-a sharing style more common on Twitter or Facebook than blogs-a few took time to opine on the compelling photographs.

“As usual in the December, it’s time for selections of moments that marked the entire year,” wrote Best Bookmarks, “They are impressive captures in several themes but all very powerful and emotional.”*

“What a year! Here’s to 2012 being a more quiet and less destructive year…” wrote Danny Devriendt at Scoop.

The No. 1 story on blogs for the week was about a new tablet device: The Asus Transformer Prime. The computer tablet looks like an iPad 2 but it also connects to an optional keyboard dock which transforms it into a laptop.

With high marks from reviewers for aesthetics, design, connections and the keyboard dock, tech blogs across the internet were excited about the implications of this new device.

“To put it simply, the ASUS Transformer Prime is easily the best Android tablet and is possibly the best tablet, period 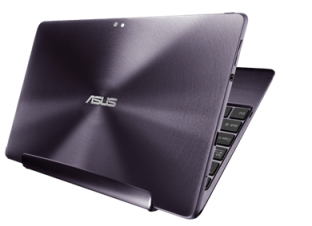 ,” wrote Hubert Nguyen in his oft-shared review for Ubergizmo.

Others agreed with Nguyen’s assessment.

“The Asus Transformer Prime is the best full-featured Android tablet yet, with a sexy design, thoughtful features, and an impressive camera,” wrote CNET.

“ASUS Transformer Prime reviews have been flooding the internets this evening (spoiler: everyone loves it) and with that has come an official release date and promo video for the supertablet,” wrote Chris Chavez at Phandroid.

“For weeks we geeks, early adopters and people who love their tech toys have been awaiting this, and none too patiently,” wrote Engadget.

The ongoing health care debate and the 2012 presidential elections were the fourth and fifth biggest stories respectively on blogs last week.

A new rule for insurance companies that was part of the Affordable Care Act went into effect the first week of December, and an article about it in Forbes had bloggers talking.

The provision, called the medical loss ratio, requires health insurance companies to spend a certain percentage of the premium dollars they collect from consumers on actual medical care as opposed to overhead costs or marketing expenses. On December 2nd, the Department of Health and Human Services issued the rules about which insurer expenditures will qualify as a medical expense.

Among other things, the author of the Forbes piece, Rick Ungar, declared that the rule would have a major and adverse impact on the for-profit health insurance industry as currently constituted. Responses to the story came from both sides of the political aisle.

From a liberal: “Of course, what they don’t acknowledge is the number of Americans that would also die as a result of a lack of access to health coverage,” wrote karoli at Crooks and Liars, “I guess those people are right on par with Bin Laden in the eyes of the right.”

And a conservative: “So yes, a bomb has gone off. Will it destroy the private insurance market? Unlikely. But you can be sure that insurance costs will explode,” wrote the College Republican National Committee.

Despite its prominence in the blogosphere, Obama’s health care reform bill was not a major story in the mainstream news last week, but a survey by the Pew Research Center for the People & the Press confirms it is something Americans strongly care about. The survey asked people to rank the most important issues to them for the 2012 presidential election and health care ranked third, behind only jobs and the budget deficit.

Other political news had bloggers talking, too. In fifth place was Herman Cain’s suspension of his presidential campaign and Donald Trump’s plans to moderate a Republican debate-before his December 12 announcement that he no longer had plans to moderate.

In third place for the week was holiday crafting techniques to make Christmas tags.

The conversation on Twitter last week was dominated by teen crooners: The always popular Justin Bieber and the boy band One Direction. 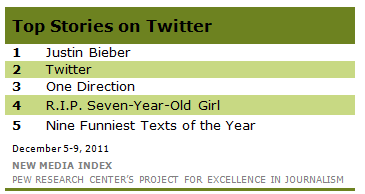 “The Biebs” came in first place with a new music video for ” target=”_blank” rel=”noopener noreferrer”>Santa Claus is Coming to Town. His ” target=”_blank” rel=”noopener noreferrer”>prank on a radio receptionist was also frequently retweeted, as was a tweet from him thanking a fan for some art work. While most of the Bieber tweeters are fans, there are always a few haters.

“This is so bad we think our ears just went blind-if that’s even possible. Justin Bieber’s Santa Claus is Coming to Town…” wrote not nerdabout.

While not at the same level as Bieber Fever, another group of teen dreams are getting some attention on Twitter, too. One Direction, a British-Irish boy band that finished third on the reality talent show X Factor registered as the No. 3 Twitter topic with ” target=”_blank” rel=”noopener noreferrer”>two videos, one of an ” target=”_blank” rel=”noopener noreferrer”>acoustic version of their song, One Thing.

Fans of the group were pleased with the rendition.

“I’ve been fangirling so hard on One Direction- One Thing Acoustic. <3” wrote Harry1D.

Twitter itself was the No. 2 story last week, with news of the site’s redesign, to make it more intuitive and easier to use.

“Day 2 and I’m still caremad about the latest Twitter redesign. Feels like it was built by product managers for marketers. Soulless,” wrote Alex Payne.

“Dear Nerds, You are not a normal. For better or worse, the Twitter redesign *is* for normals. This should answer all your questions,” wrote BJ Clark.

The fourth most-discussed story on Twitter for the week was about the rape and murder of a seven year-old-girl. Several Twitter users implored their followers to retweet messages about her death to show they cared.

Wrapping up the five top Twitter stories for the week was a link to the nine funniest texts from the blog Damn You Auto Correct, which shows humorous text messages that were auto-corrected to say something funny. Be warned that some of this content is not safe for work.

“I’m still wiping away my tears from laughing so hard,” wrote miriella.

“I rarely say it, but ROTFLMAO applies,” tweeted Holly Bemiss.

This author’s personal favorite of the typos was this exchange between a man and his brother.

International news dominated YouTube last week, due in part to a high-profile gaffe by Enrique Peña Nieto, the leading contender for the 2012 Mexican presidential elections.

The No. 1 news video showed the former state governor floundering for about four minutes at the Guadalajara International Book Fair on December 3rd, when he was asked to name three books that had influenced his life. He was not able to correctly name a book besides the Bible and confused the names of two well-known Mexican authors. The politician was attending the fair to promote his new book Mexico, the Great Hope.

Peña Nieto’s flub was also lampooned using a popular internet meme that involves tweaking a scene from a 2004 movie about Adolph Hitler to make it appear as if the Nazi leader is angrily ranting about a current event. The No. 2 YouTube video last week featured the clip from the film with Spanish subtitles of Hitler sputtering profanities after learning of Peña Nieto’s gaffe.

Homepage Image: Joplin, Missouri after a tornado hit it on May 22 (Aaron Fuhrman)
Above: An U.S. Army soldier high fives an Afghan boy during a patrol in Pul-e Alam, a town in Logar province, eastern Afghanistan. (Reuters / Umit Bektas)

For this week’s report, Twitter results were only from Tweetmeme as Twitterly was down.

Blogs and Twitter Make the Grammys—and Chris Brown—the No. 1 Topic