Fans of Apple, who are a very large presence in the realm of social media, dominated the online conversation last week. But while the expectation was that the October 4 unveiling of the company’s latest version of the iPhon 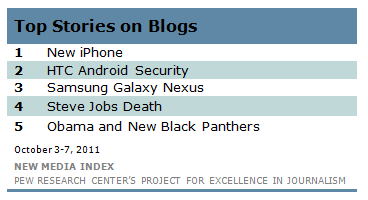 e would be the focus, the October 5 news that Apple co-founder Steve Jobs passed away from pancreatic cancer changed the narrative dramatically.

For the week of October 3-7, discussion of the new Apple iPhone was the top story on blogs, according to the New Media Index from the Pew Research Center’s Project for Excellence in Journalism. And the passing of Jobs was the top story on Twitter and the fourth leading subject on blogs.

Bloggers have been anticipating Apple’s unveiling of its newest iPhone for more than two months as the company released little information about the device. In fact, rumors about the new iPhone have been one of the top stories on blogs for eight of the past 10 weeks. And much of that speculation came to an end when new Apple CEO Tim Cook finally delivered an October 4 address introducing the iPhone 4S. The unveiling, which was streamed online, allowed the blogosphere to continue its fascination with the product-especially now that it had actual specifics to discuss.

Despite the fact that the Apple online store was flooded with orders in the first 24 hours, the initial responses mostly voiced disappointment that the new smartphone was not more advanced-perhaps reflecting the level of pre-release excitement about the device.

Those complaints, however, seemed to become almost irrelevant one day later as news broke of Jobs’ death. Not only had the company been popular online, but its former CEO also generated a lot of attention. The week in August when Jobs announced his resignation, the news was the leading subject on Twitter.

The news of his passing hit fans hard and many used social media to share their thoughts. 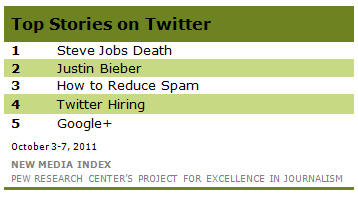 According to Twitter, there were 6,049 posts per second immediately after the news broke at 8 p.m. Eastern time, one of the highest levels of activity in the site’s history. In all, there were nearly 5 million posts on Twitter about the subject that evening, according to the firm Crimson Hexagon. By Thursday, there were more than 3,000 videos posted on YouTube labeled “Steve Jobs” according to the New York Times, most of which included people sharing their appreciation for the inventor and their sadness in his passing. A &feature=youtu.be&t=22s”>video of his 2005 commencement address at Stanford was viewed more than 1.5 million times in the 24 hours following the news.

Reactions were almost universal in their praise for Jobs, and came from a wide array of sources from President Obama-who said that Jobs “exemplified the spirit of American ingenuity”-to actor Ashton Kutcher who changed his avatar to honor Apple’s founder.

Prior to the official unveiling of the iPhone 4S, bloggers had speculated for months about what the new Apple phone would consist of, and whether the phone would be a new iPhone 5, or simply an upgrade of the iPhone 4. That anticipation led to enormous expectations.

“I felt disappointed at first that we wouldn’t be getting a new svelte unibody phone, but the more I thought about it, the more sense it made for Apple to decouple industrial design from the internals,” shared Kevin Fox at http://fury.com/2011/10/grading-my-iphone-predictions/. “The 4′s industrial design is still unique and, with the changes made to the antenna in the 4s, the only major shortcoming I have is reportedly overcome in the 4s.”

In general, though, the initial reaction to the new gadget was less than enthusiastic.

“Apple showed off their newest iPhone today, and it seems that most were disappointed that it was only an iPhone 4S and not an iPhone 5,” wrote John Chow.

“There’s nothing really notable, physically, about the iPhone 4S in comparison to the iPhone 4,” wrote Joshua Topolsky at This is my text. “Do you have an iPhone 4? Pick it up. Look at it. Turn it over. There, you’ve just done an iPhone 4S hands-on. Congratulations!”

“So yesterday was the day all the Apple fanboys have been anticipating for 16 months now (including me) and to say it was a bit disappointing is an understatement,” added David M. at Virtual-Hideout. “As much as I’ve fallen in lust with the design of the iPhone 4 over the last 16 months or so, I really expected so much more than a simple hardware update…Am I disappointed with the Oct 4th keynote? Yup. The fever pitch of the rumors was so deafening, I’m not sure I wouldn’t have been disappointed either way.”

And at least one blogger found a silver lining.

“You can also think about it this way; at least we have many more months of iPhone 5 rumors to look forward to,” posted Alex Gardner at iPhone Alley.

The Death of Steve Jobs

The tributes to Jobs came in numerous forms online. Mashable posted a page featuring 15 of his most inspirational quotes such as, “Stay hungry, stay foolish,” and “Remembering that you are going to die is the best way I know to avoid the trap of thinking you have something to lose.”

A number of bloggers and tweets included links to obituaries from places like the Wall Street Journal and All Things D.

And in a sign of the unique way social media can serve as a reflection of itself, many on Twitter highlighted a unique image of Steve Jobs that was made up from the text of tweets remembering him fondly.

The New York Times chronicled a number of the messages using the hashtag #stevejobslegacy.

“To explain why Steve Jobs was so important is simple: Every Apple product I’ve ever owned felt like it was built for me,” tweeted Kevin J. Hardy.

“Surreal to be blogging and reading about Steve Jobs on a computer that would not be here without him,” noted matvic.

Tributes on blogs were no less gracious.

“He was, indeed, a world leader, and he touched your life,” insisted Alan Zeichick. “Even if you don’t own a single Apple product, even if you’ve never seen a Pixar movie, you have been affected by Steve’s drive, determination and vision. Steve wasn’t always right, but he never stopped innovating, never stopped trying to improve the world (and sell products).”

“His ingenious way of making something as complex as transcendentalist philosophy accessible to the masses mirrored the way he brought personal computing to the masses, by making it seem accessible to all,” declared Alexia Tsotsis at Tech Crunch.

“Steve Jobs has the kind of effect that Princess Di had on the world,” proclaimed Down the Avenue. “Yes, really. He ‘touched’ people. He ‘inspired’ people. He moved people to stretch beyond their own limits and beliefs and build something more. Be something more. Care about design in their own creations in a way that would transform people.”

Even beyond Apple and the iPhone, other smartphones generated significant attention on blogs last week.

The second-biggest subject was the discovery of massive security vulnerabilities in Android devices. The software running devices such as the EVO 3D and 4G was found to have logging tools that collected information and could be used to uncover emails, addresses and other information. HTC promised to fix the problem after the discovery was made.

The specs of the new Samsung Galaxy Nexus phone were the third-largest subject on blogs. Codenamed “Nexus Prime,” this phone is expected to compete with the new iPhone.

The only top story not focused on technology in blogs last week was the No. 5 subject, an expose by the conservative blog Big Government which purported to show photographs proving that Barack Obama appeared and marched with members of the New Black Panther Party while he was campaigning in 2007.

The No. 2 most linked-to subject involved “>videos of pop star Justin Bieber during his recent tour in Mexico. This marks the fourth time in the past five weeks that the singer has been among the most popular topics on Twitter.

A collection of advice from Mashable about ways to reduce the amount of spam in “your inbox, mailbox and voicemail” was the third-biggest subject. That was followed at No. 4 by a report that Napster co-founder and former Facebook president Sean Parker was joining Twitter. The report also noted that he apologized to Facebook CEO Mark Zuckerberg for joining a rival service.

And a Mashable post criticizing Google’s senior management for not having their own Google+ accounts, thus suggesting they don’t value their own service, was the fifth-biggest story.

The most-viewed news video on YouTube last week involved a country musician getting himself into hot water.

Country singer Hank Williams, Jr., best known for performing the song that has introduced the Monday Night Football broadcast for 20 years, appeared on the October 3 edition of Fox & Friends to discuss, among other things, politics. Williams, a well-known conservative who supported Sarah Palin in the past, expressed outrage at the golf game played months earlier between President Obama and House Speaker John Boehner. “Come on. That’d be like Hitler playing golf with Netanyahu,” volunteered the musician.

Williams’ comparison of Obama with Hitler drew sharp rebukes, and ESPN, the channel that airs Monday Night Football, removed his musical number from the broadcast. Three days later, ESPN announced it would no longer use Williams and his song although Williams claims it was his decision to end the relationship.

In five days, the clip was viewed 1.8 million times on YouTube.