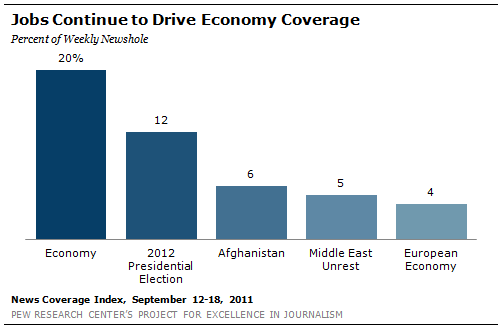 The troubled U.S. economy was the No. 1 story last week, and  for the third week in a row, President Obama’s September 8 job creation speech and plan were the central themes in that economic coverage.

Overall, the economy accounted for 20% of the newshole during the week of September 12-18, down from 28% the week before, according to the Pew Research Center’s Project for Excellence in Journalism. Despite the unfolding events of the Arab Spring and a busy presidential campaign, the economy has topped the news agenda this year, accounting for nearly one-fifth (18%) of the newshole since January 2011. The No. 2 story has been the widespread unrest in the Middle East, at 15%.

The previous two weeks of economic coverage had been focused on the jobs speech itself—including a scheduling conflict that forced it back by one day. But, last week, the media narrative emphasized a new round of partisan battles over spending cuts and tax increases that the speech provoked. As with past battles of this kind, the coverage suggested, no agreement was imminent.

Another high-profile candidates’ debate drove campaign coverage last week, making it the No. 2 story at 12% of the newshole—slightly lower than 15% the week before. The September 12 Tea Party debate, which was also sponsored by CNN, fueled campaign coverage, which received the most attention on cable, where it was the No. 1 story last week at 25% of the airtime studied. The debate raised new questions, which the media tracked through the week, about Michele Bachmann’s position on mandatory vaccines, Rick Perry’s position on Social Security, and Ron Paul’s position on health care for the uninsured.

Aside from those two dominant stories, the mainstream news agenda was focused on international affairs.

At No. 3 (6%) was the war in Afghanistan, where much of the coverage focused on the September 13 Taliban attack on the U.S. embassy in Kabul. At No. 4 (5%) was unrest in the Middle East, largely taken up with the transition of power in Libya.

Debt woes in Europe, driven by Greece’s fiscal crisis, accounted for 4% of the newshole, making that subject the No. 5 story.

The economy was the No. 1 story in all sectors of the media last week, except for cable, where the campaign took the top spot. And nearly half of that overall economic coverage focused on jobs.

President Obama’s September 8 speech to Congress kicked off a flurry of activity around his American Jobs Act, as well as an outpouring of media coverage. Reporters spent last week following Obama as he tried to sell the legislation with a campaign style tour, and as a familiar partisan gridlock reemerged in Washington over the core tenets of the bill.

There was some suggestion at the beginning of the week that Republican congressional leaders, smarting from their own low approval ratings, might be willing to cooperate with the president. That was the impression of NPR’s Cokie Roberts, who commented after those leaders sent Obama a letter saying his proposal has merit. “It doesn’t mean they’ll agree with him, but at least they want to appear to be ready to work with him,” said Roberts on the September 12 broadcast of Morning Edition.

But any optimism about a possible deal quickly vanished.

On the same day as Roberts’ commentary, Foxnews.com reported that “Republicans slammed the White House Monday” after the administration floated the idea of partial tax increases to help pay for the bill. Appearing with conservative Fox News talk host Sean Hannity, the American Spectator’s John Fund said: “This is pure politics. Obama is using yet another attempt to try and get the Republicans to raise taxes so that they can break their no new taxes pledge.”

By Tuesday, September 13, a CNN daytime report was questioning the ability of Obama’s bill to survive: “Between the tax hikes and the GOP resistance to anything that smacks of stimulus, is the American Jobs Act doomed?”

There were few signs of a breakthrough as the week wore on. A September 15 Washington Post article suggested any progress on the legislation, and therefore jobs, would be contingent on another round of partisan battles, calling Boehner’s opposition to tax increases a “swift return to the trench warfare that characterize the debt-and-spending debate of early summer.”

The media also spent part of the week following Obama around as he delivered speeches in Ohio, North Carolina and Virginia, pitching his plan to pay for job creating tax incentives with tax increases on large corporations and the wealthy. 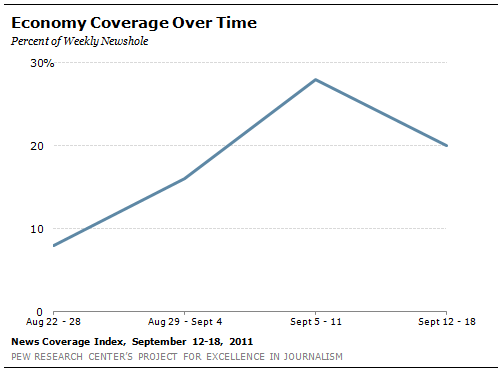 A September 14 Associated Press story described the stakes for the president: “With the economic recovery stalled, unemployment holding at 9.1 percent and people losing confidence in his handling of the issue, he needs to show progress on the economy as the GOP presidential campaign against him gains steam.”

The September 12 CNN-sponsored Tea Party debate offered the media a range of opportunities to vet several of the Republican candidates for president, and helped make the campaign overall the No. 2 story last week.

When Minnesota Rep. Michele Bachmann challenged Texas Gov. Rick Perry on his state’s mandated human papillomavirus (HPV) vaccine for girls—charging that it was dangerous—many media reports cast doubt on Bachmann’s charge, citing sources who called it anecdotal and unproven. But as the week went on, the press turned more attention to a possible link between the Texas law and Perry’s ties to Merck, the pharmaceutical company that manufactures the vaccine. Perry had received a $5,000 campaign contribution from the company.

The debate also provided fodder for the media to evaluate Perry’s attention-getting critiques of Social Security, and Texas Rep. Ron Paul’s libertarian stance on health care. Perry doubled down on his past comparison of Social Security to a Ponzi scheme, a claim that Romney and others challenged. That generated some media coverage that examined the challenges facing the Social Security program. Debate moderator Wolf Blitzer posed a hypothetical question to Paul, asking whether a young individual without health insurance should be cared for on the government’s dime in the event of a medical emergency. Paul answered by invoking one’s freedom to take risks.

The war in Afghanistan was the No. 3 story last week largely due to coverage of a Taliban attack on the U.S. embassy in Kabul, killing more than two dozen, though none of them American. The last time Afghanistan ranked among the top five stories was the week of August 8-14 when a military helicopter was shot down, killing 30 Americans. Also last week, media coverage of Afghanistan included the Medal of Honor ceremony for Dakota Meyer, who became only the third living recipient of the award for his acts of bravery on the battlefield.

At No. 4 was continuing unrest in the Middle East. Coverage turned toward Libya, following the transition of power, as Islamists and moderate rebels vied to lead the country. Some stories highlighted the visit of French President Nicolas Sarkozy and British Prime Minister David Cameron to the country.

A gathering storm over Europe’s debt problems drew the media’s attention last week, making it the No. 5 story. Much of the coverage followed growing concern that Greece will not be able to meet its debt obligations by the upcoming deadline. Some reports followed the news that Moody’s had downgraded the debt ratings of two major French banks.

During the week of September 12-18, Barack Obama remained the central figure in the news, featuring prominently in 12% of stories studied. Though that was down from 16% the week before, it still represents a very substantial level of coverage.  (To register as a dominant newsmaker, someone must be featured in at least 50% of a story.)

Three Republican candidates were among the top newsmakers last week. Rick Perry and Michele Bachmann, two GOP candidates who sparred over the vaccine issue, registered in 5% and 2% of the week’s stories respectively. Romney was a dominant figure in 1% of the stories.

The two American hikers detained in Iran also were featured in the news with Josh Fattal a prominent newsmaker in 1% of the stories studied and Shane Bauer appearing as a key figure in 1%. (Last week, Iran’s president Mahmoud Ahmedinejad announced that Fattal and Bauer, held for two years, would be released after a bail agreement had been reached, though no agreement had occurred as of this writing.)

The other top newsmaker was Dakota Meyer, (1%) the U.S. Medal of Honor recipient.