Two dramatic events—reports of a potential breakthrough in deadlocked deficit talks and the verdict in the Casey Anthony murder trial—drove the dominant news stories last week.

Fueled by coverage of the high-stakes deficit negotiations, the economy accounted for 24% of the newshole last week, making it the No. 1 story from July 4-10, according to the Pew Research Center’s Project for Excellence in Journalism.

That coverage was up from 19% the previous week and marked the third week in a row that the impasse over the deficit and debt ceiling has made the economy the No. 1 story. Last week, the deficit debate accounted for about two-thirds of the overall economy coverage and by week’s end, a flurry of optimism about a deal was replaced in the media narrative by the prospect of more deadlock.

The murder trial of Casey Anthony, the Florida woman accused of killing her two-year-old daughter, made headlines last week with a not-guilty verdict that surprised many and provoked outbursts of public anger. The case was the No. 2 story, at 17% of the newshole.

The dramatic conclusion of the trial, the ensuing analysis and finally, the sentencing, were given heavy play on television news. The case was the No. 1 story on both network news (18%) and cable news (38%), and proved to be a major boon for CNN’s sibling channel HLN, whose ratings spiked 1,700 percent on the afternoon of the trial’s conclusion.

The intense interest in the Anthony case last week drove it far past other trials in terms of coverage of a verdict. Since January 2007 when PEJ began monitoring news, the next biggest verdict story was the conviction of presidential aide Lewis “Scooter” Libby, the week of March 4-9, which accounted for 13% of the newshole. Libby was found guilty of lying to the FBI about his involvement in releasing classified information about covert CIA agent Valerie Wilson, aka Valerie Plame, to The New York Times.

In a rare event, the media themselves became a major news subject last week when the British tabloid News of the World—part of Rupert Murdoch’s empire—became embroiled in a phone hacking scandal that included murder victims and the families of dead soldiers. It was the No. 3 story, at 6% of the newshole, as Murdoch shut down the News of the World amid speculation that fallout from the case could spread.

The final launch of space shuttle Atlantis from the Kennedy Space, which prompted some nostalgia laden coverage, was No. 4 at 5%.

The presidential campaign, which had been a mainstay of the news agenda for weeks, dropped to just 3% last week from 13% the previous week, registering as the No. 5 story. Most of the coverage was focused on the field of GOP hopefuls.

With the August 2 debt default deadline looming, coverage of attempts in Washington to solve the nation’s debt crisis intensified last week as the story followed a roller coaster trajectory of hope followed by deadlock.

The story was dominant news on the radio, accounting for 43% of the airtime studied. It was also the No. 1 story in newspapers (20%) and online (17%). Both cable and network TV, which focused more heavily on the Anthony trial, each had the economy as their No. 2 story. 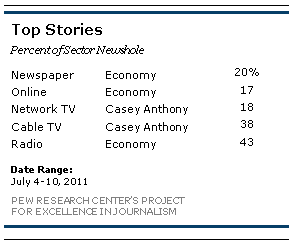 Hope was in the air that perhaps this time, President Barack Obama and House Speaker John Boehner could produce a major deficit-reducing solution—the so-called big deal—through a combination of tax loophole closures and changes to entitlement programs. But even before the compromise plan fell apart over the weekend, partisan voices in the mainstream media voiced their concerns.

“Mr. President, let’s talk tonight. You can’t negotiate with these people. They’re not honest brokers. The Bush tax cuts are a big part of the reason why we’re in this financial hole,” pleaded liberal commentator Ed Schultz on his July 7 MSNBC program.

“This is always the problem when we’re dealing with Democrats that are dishonest in their negotiations. They always promise the moon,” cautioned conservative Sean Hannity on his July 8 radio talk program.

The media portrayed the Obama and Boehner camps as serious about the prospect of reaching agreement, despite howls of protest from their respective bases. According to the Wall Street Journal on July 7, “President Barack Obama and House Speaker John Boehner have upped the ante ahead of a high-profile summit on deficit reduction Thursday, suggesting in talks that they might tackle longtime taboos, including tax increases and Social Security changes.”

The idea of a major breakthrough continued to be part of the media narrative. “Though the president and Congressional leaders did not close wide gaps on the issues of spending cuts or new tax revenues, officials briefed on the talks said, they emerged with a consensus to aim for the biggest possible deal,” reported the New York Times on July 8.

Despite that buildup, however, the week ended with reports of continuing partisan differences and stalemate.

According to the Washington Post on July 10, Boehner “told Obama that their plan to ‘go big,’ in the speaker’s words, and forge a compromise that would save more than $4 trillion over the next decade had fallen victim to the toughest ideological issues: how to raise taxes and cut spending on popular health and retirement programs.”

The denouement of a trial that had been closely followed by many for three years finally occurred on Tuesday, July 5.

The not-guilty verdict for defendant Casey Anthony, who was cleared of murder, manslaughter and child negligence charges in the death of her young daughter Caylee, came as a shock to many in the media, and helped sustain high levels of coverage throughout the week. While the amount of attention peaked on Tuesday, it had not dropped significantly as late as Thursday.

CNN reporter Martin Savidge described what it was like being in the courtroom when the verdict came down.

“We knew it was going to be extremely dramatic,” said Savidge, who described a pensive defense team, huddled around Anthony as if in anticipation of a guilty verdict.  “But then comes the verdict, and it was a total shock… And that’s when you saw a complete turnaround, you no longer saw the trembling Casey, you saw a jubilant team. They came together as one, piling on, hugging one another and sobbing. Not elation, sobbing.”

Some in the media did not hesitate to share their opinions about the defendant. Fox News Channel host Bill O’Reilly called Anthony “vile” on his July 5 program. On the same day HLN’s Nancy Grace, who perhaps more than anyone helped raise the case to national prominence, said that in response to the verdict, “devil is dancing.”

Coverage continued to feed off the case with the July 7 sentencing—four years in prison, but most of it applied as credits for the time Anthony has already served—leaving analysts with more fodder to process on the air.

As the public’s anger at the verdict made its way into the media narrative, CNN’s Anderson Cooper closed out the week on his July 8 program by imagining Anthony’s future.

“A little more than a week from now, Casey Anthony will be getting out of jail. She’ll be walking free into a world in which millions of people know her name and know her story—people who believe rightly or wrongly how her murder trial should have ended instead of how it actually ended.”

In that same program, one analyst offered that perhaps only plastic surgery and hair coloring could help Anthony hide from an angry public.

A media scandal, simmering for years, finally erupted last week when The News of the World—a British tabloid owned by Rupert Murdoch’s News Corporation—was found to have hacked into the mobile phone of a young murder victim back in 2006. The story quickly expanded   as the scandal’s roots were revealed to run deep, exposing cozy relationships between the newspaper, British police, and the government. British police now have a list of some 4,000 potential News of the World targets that include celebrities, members of the royal family, politicians and other crime victims.

The story garnered the most attention in the more internationally oriented online news sector, where it accounted for10% of the newshole.

The launch of the space shuttle Atlantis last week went off without a hitch. And it was the momentous nature of the event that raised it to rank as the No. 4 news story last week. Many stories reflected on the bittersweet feeling of ending 30 years of space shuttle missions from NASA’s Kennedy Space Station in Cape Canaveral, Florida.

Casey Anthony, the defendant in the high-profile murder case, easily generated the most attention in the media last week. She was a dominant newsmaker in 12% of all stories studied by PEJ from July 4-10. (To register as a dominant newsmaker, someone must be featured in at least 50% of a story.)

Despite hosting his first ever “Twitter” town hall and leading a bipartisan debt summit, President Obama was relegated to No. 2 lead newsmaker status behind Anthony (8%), the same level of coverage as the week before.

At No. 3 (2%) was Dominique Strauss-Kahn, the former International Monetary Fund head once favored to become France’s next president.  Even as the woman who had accused Strauss-Kahn of rape was losing credibility due to inconsistencies in her story, a French writer filed assault charges against him on July 5, raising new uncertainties about his fate.

At No. 4 and 5 (1% each) were the new British royal couple Prince William and Kate Middleton, whose travels throughout North America included numerous photo opportunities.

The Libby Verdict, And Its Fallout, Lead the News